On Theocracy and Double Standards 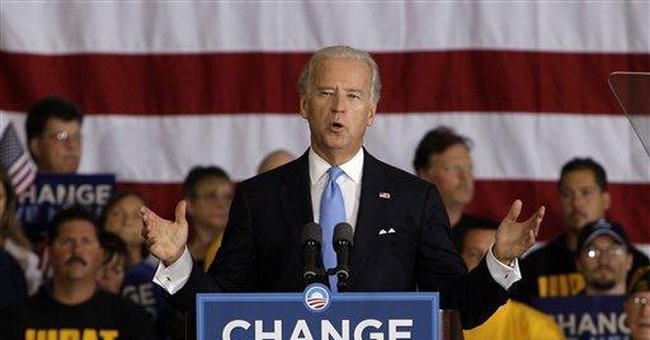 In the next few weeks, we're going to hear a lot of hot air from Joe Biden as he tries to recapture the spotlight from Sarah Palin. One thing I doubt we'll hear from him is that rare sensible gem he uttered a few years ago about Democrats and people of faith. But he would do well to remember his fleeting words.

Biden said: "We have too many elites in our party who look down their nose on people of faith. … That's the big problem with my party."

You can say that again, Joe. But next time, you ought to try listening to your own words instead of just talking to hear your head rattle.

If Biden was sincere, why won't he take issue with liberals in the media and elsewhere who routinely demonstrate their contempt for Christians?

Whether it's Whoopi Goldberg hyperventilating about the separation of church and state, Charlie Gibson distorting Sarah Palin's views on the intersection of faith and governance, or Obama himself disparaging small-town Christians for their unashamed reliance on the Bible, liberals just don't get it. For them to occasionally pretend they do just adds insult to injury.

On "The View," Goldberg asked John McCain, "So if you believe in the separation of church and state, did it not give you a moment of pause that Sarah Palin … (does) not have the same beliefs as you do about these things?"

I think we can safely infer that Goldberg was suggesting that Palin does not believe in the separation of church and state. Why? Presumably because Palin has said that she would seek God's guidance in governing. Horrors!

After all, said Goldberg, America includes not only Christians and Jews but also Muslims, Zoroastrians and Wiccans. She asked of McCain: "Are you to govern this nation as God would have you do it, or do you govern this nation for the greater good of the people in it?"

Let liberals keep revealing their profound ignorance concerning the Constitution's prohibition of the establishment of religion and guarantee of religious liberty. Let them continue broadcasting their belief that it is improper for public officials to humbly seek God's guidance in discharging their duties. Let them showcase their convoluted view that a Christian public official can't constitutionally govern unless he erects a Chinese firewall between his faith and his governance. Let them persist in displaying their misapprehension that Christian politicians, by virtue of their faith, are theocrats and cannot serve without discriminating against non-Christians.

ABC's Charlie Gibson approached it from a different angle, trying to paint Palin as a theocrat who believes we are fighting a "holy war" in Iraq. Despite Gibson's smug assertion that he was reciting Palin's "exact words," he specifically omitted key words and completely twisted her meaning. He misrepresented Palin's exhortation that we pray for our troops and pray that they are doing God's work as an affirmative statement that they (SET ITAL) are (END ITAL) doing God's work.

Not that it would have been terrible for Palin to have rejected liberal moral equivalency arguments between Americans and terrorists and implied we have the moral high ground over homicide-bombing fanatics. But she didn't say that. Palin has made clear she doesn't believe she has a pipeline into God's will or that she can speak for him -- only that she would strive humbly to do his will and that she would continue to commune with him, in prayer and through reading the Bible. Again, horrors!

I hope liberals keep showing their open contempt for sincerely practicing Christians. I hope they continue to operate under the assumption they can scare Americans about Palin's Bible-believing faith. But in the meantime, they might want to refresh their memories about American presidents and prayer.

Almost all of our presidents have relied heavily on prayer. But to be fair, let's just look at modern Democratic ones.

Jimmy Carter said: "There's no doubt that during my time as president, I prayed more intensely and more fervently for God's guidance than at any other time in my life. … The problems were so complex that I sought counsel." Bible-toting Bill Clinton said, "I assure you that no president makes decisions like (an agreement with Haiti) without deep thought and prayer."

Do you ever remember anyone accusing these Democrats of having alarming theocratic impulses?

Better yet, have you heard anyone in the liberal media criticizing Obama for his statement that he prays "to Jesus every night"? Or Joe Biden for urging people to pray that the levees in New Orleans hold?

I wonder why not.