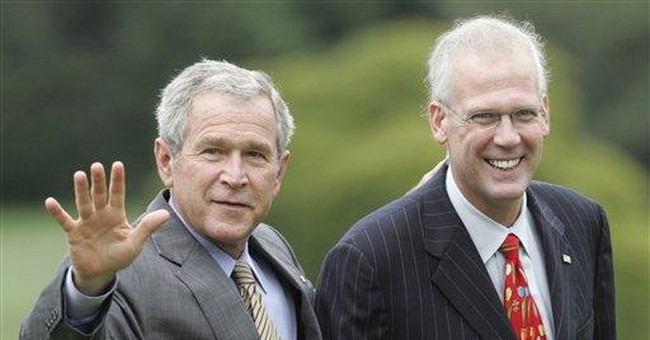 I can't pinpoint the precise date I met Tony Snow, but I remember it was over the telephone. We talked about one of his passions: radio. And we became fast friends. From that point on, we talked every few months, until about three or four months ago when I could only get his voice mail.

I knew something was up because he was always good about returning calls. Still, I probably would have chalked it up to his busy schedule, except that I read news reports that he was forced to cancel a number of speeches because of illness.

I remember e-mailing a few mutual friends: Lucianne Goldberg and Kathryn Lopez. Both shared similar concerns, but we were all cautiously relieved when follow-up news stories reported Tony was OK.

I had no idea Tony had taken a turn for the worse, so the news of his death Saturday completely shocked me. The last time I talked to Tony about his disease, he was entirely upbeat and optimistic.

In retrospect, I have to wonder whether he wasn't sparing some of his friends the extent of his illness because he never wanted to dwell on himself and certainly was never seeking sympathy.

Tony was a person who always gave more than he took or received in a relationship. Even when he called seeking advice or an opinion, he invariably inquired, with absolute earnestness and intense interest, how things were going in my life, and he wouldn't end the conversation until I responded.

The last time I saw him was when he took time out of his insanely busy workday to give my daughters and me a personal tour of the West Wing. We will never forget that experience -- or his graciousness.

When the White House offered Tony the press secretary position, I was among the many friends he called seeking opinions on whether it was a good move. My guess is that he had already pretty much decided to take the job, but I don't know for sure.

What I do know for sure, though, is how I reacted -- and why. At the time, Tony had his nationally syndicated radio show and was working hard on building his affiliate and audience base. He knew if he took the White House position, he would lose his momentum and make less money. But it was obvious he really wanted to take the job.

My unhesitating and unequivocal response was that he should take it. This was a once-in-a-lifetime opportunity, and the position was tailor-made for Tony Snow. It would give him the opportunity to demonstrate his full range of skills, in ways that even television and radio would not. He was excellent on television and radio and a gifted writer; but he would be the best-ever White House press secretary and would immeasurably benefit the Bush administration.

He had a uniquely jovial demeanor; he got along with people of all political persuasions; he treated everyone with respect; he was deeply knowledgeable in all matters with which he would deal and a quick study as to the limited others; he was a fierce advocate for positions he believed in -- and most of those aligned nicely with this administration's; and his verbal agility was unparalleled. Even in fierce debate, he was always of good cheer.

But in my opinion, Tony's greatest attributes were his genuineness and authenticity, his impeccable character, his abundant decency as a human being, his likability, his work ethic and, most of all, his profoundly held life priorities, beginning with his paramount and unshakable commitments to God and family.

Many have already spoken of Tony's consuming love for his wife and children and his passion for God. I am but another firsthand witness to his "walking the walk" and, like so many others, greatly admired him for it.

People tend to say very nice things about people who pass away -- and that is as it should be; it's the right thing to do. But be assured in Tony's case, all the eulogies you are hearing about and reading are heartfelt and utterly without reservation. Tony was the real article -- he and the life he led were examples to which we should all aspire.

Like all the other fortunate people whose lives he touched, I was extremely fortunate to have known Tony Snow. God bless him, as he is now in a better place and no longer suffering. God bless his wonderful family.