It's Only About Winning 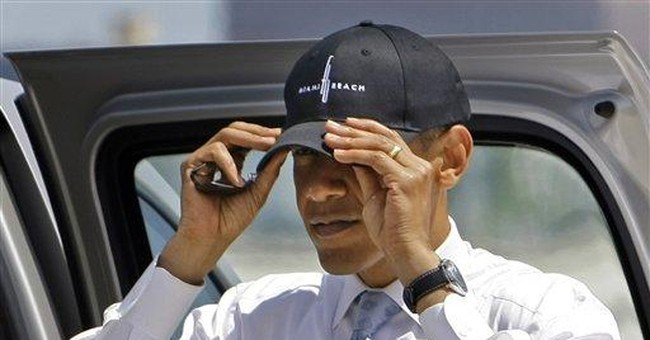 The Washington Post reports that Sen. Barack Obama is aggressively trying to reintroduce himself to voters, echoing the spin of Obama's advisers that not everyone knows him yet. In reality, Obama's major campaign challenge will not be to reveal, but to conceal his true identity.

Obama is not trying to introduce himself to unreached voters, but is engaged in damage control with many he's already reached -- and insulted and disillusioned.

As long as he was soaring above the fray with the lofty rhetoric of hope, change and unity, Obama could masquerade as a quasi-messiah figure. But once forced into the nitty-gritty of contested issues and debates, his false visage began to crack. Those cracks expanded into campaign-threatening fissures when voters learned about Obama's sordid associations and left-wing elitist snobbery toward small-town America.

The Post says that in his reintroduction, Obama has "offered a clear road map for the kind of candidate he is likely to become …: an ambitious gamer of the electoral map, a ruthless fundraiser and a scrupulous manager of his own biography in the face of persistent concerns about how he is perceived."

What the Post left out is that Obama has also shown himself to be an unscrupulous master of the politics of calculation and expedience. Whether on public finance, NAFTA, Iran, Iraq, Jerusalem, special interests, Cuba, illegal immigration or the decriminalization of marijuana, Obama has demonstrated a propensity for flip-flopping that could embarrass the grandmaster himself, Sen. John Kerry.

But here's what's scary: For all of Kerry's reputed smoothness and Eastern intellect, he often tied himself in knots trying to reconcile his absurdly opposing positions. Obama can flip and flop with unmatched alacrity and facility and with the absence of self-consciousness and accountability of an accomplished sociopath. This guy doesn't even acknowledge he's changing positions; he does it without breaking a sweat and never looks back.

Of course, Obama benefits enormously from a favorable press, one that, in furtherance of his electoral cause, will tolerate almost any degree of preposterousness from him.

In addressing Obama's stunning position shift on public financing, the Post gropes for the best possible spin. The flip, says the Post, reveals Obama's "determination to press his financial advantage, even at the cost of handing his Republican opponent the opportunity to raise questions about the sincerity of his rhetoric on reform."

We are to accept Obama's change on public finance as a positive because, according to the Obama supporters the Post favorably quotes, it dispels the myth that Obama is naive and proves he is tough enough to take heat for his change.

I get it. We should be grateful for Obama's willingness to reverse himself on the issue of money and corruption in politics, which he led us to believe involved a nonnegotiable core principle, because it shows he's got courage -- courage enough to stare down the likes of Mahmoud Ahmadinejad. Unbelievable.

But if pressed, even the slick Obama will have trouble squaring his new stance with his September 2007 statement that he would agree to public financing if his GOP opponent would and his February 2008 statement to Tim Russert that he would sit down with Sen. McCain and try to agree to a system fair for both sides.

But his shift on public finance is hardly shocking when taken in the context of his many other major (and some minor) flip-flops. I just ask you to consider the common thread underlying all of these turnarounds (though just a partial list): a) his condemnation of union contributions to the Clinton and Edwards campaigns as "special interest money" but his eager acceptance of such money for himself as coming from representatives of the "working people"; b) his flip on ending (January 2004) then retaining (August 2007) the Cuba embargo; c) his March 2004 statement that opposed a crackdown on businesses hiring illegal immigrants, compared with his Jan. 31, 2008, debate statement endorsing such a crackdown; d) his advocating the decriminalization of marijuana in January 2004 versus his Oct. 30, 2007, position opposing its decriminalization; e) his jaw-dropping same-day flip on having Jerusalem remain the undivided capital of Israel; f) his shameless reversal on NAFTA; g) his nearly immediate backtracking on whether Iran poses a serious threat to America; h) his progressive position shifts on Iraq -- as documented by Peter Wehner and Michael Barone -- from "don't go in, stay in, and get out"; i) and his vigorous defense then abandonment of both his pastor and his church.

The common thread, in a word, is expedience. It is not toughness; it is not savvy; it is not gravitas; and by all means, it is not admirable.

Barack Obama is every bit as politically calculating as Bill Clinton but twice as smooth. And if that doesn't jolt you, you're sleeping.