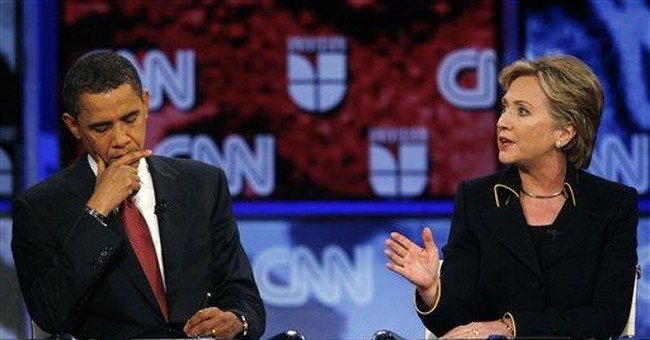 Democrats seemed determined to convert their sunny 2008 forecast into a perfect storm, which only can be diverted if either the approaching Obama front or Clinton front dissipates soon or changes directions to join forces with the other via the proverbial "dream ticket."

Until Pastor Wright managed to become Obama's potentially career-shattering albatross, Obama looked unstoppable, indeed superhuman. But as has happened repeatedly in this campaign, Hillary's persistence was rewarded -- briefly, anyway. Obama's long and close association with the incendiary pastor undercut his perceived ability to rise above both race and party.

With the passage of a little time, though, Obama appears to have recovered. Or are his rising poll numbers merely a result of Hillary's umpteenth gratuitous tall tale?

It's hard to imagine that Obama's 52 to 42 percent national lead among Democrats, his narrowing of the superdelegate gap, and his lopsided acquisition of endorsements since Super Tuesday (64 to nine) are the result solely of Hillary's fraudulent assertion of sniper-tested heroism.

It's more likely that concerns about Obama's association with Wright have diminished with the cessation of a 24/7 news cycle devoted to it. The mainstream media's reversion to Obama adoration following his dreamy post-Wright lecture on race in America hasn't hurt him, either.

That said, if Hillary wasn't deterred before -- when her prospects looked even worse -- why would she be now? She has to believe -- along with many, many others -- that the Wright story has legs.

But the dirty little secret is that the Democratic left, which wields enormous power in the party, probably isn't much troubled by Pastor Wright's anti-American and racist diatribes or Obama's arguably tacit endorsement of them.

Don't forget that it wasn't the Democratic left that threw Howard Dean overboard. Nor did the party reject Dean's message; they just deemed him unelectable, and the media reinforced that perception.

Interestingly, the same thing hasn't happened yet to Obama. Since the initial Wright shock wore off, there has been no sustained mass exodus from Obama. Yet his association with Wright, along with other disturbing stories beginning to surface out there, could render him as unelectable in the general election as Howard Dean in his worst screaming moment.

Why is Obama weathering this storm? Is it political correctness; are Democrats cutting him extra slack because of his race? Is it that they are in denial about his increasing baggage because they so crave a party deliverer who speaks their language? Is it because they aren't viscerally repulsed by Pastor Wright's hate speech or Michelle Obama's apparent grievances against this nation? Or is it that they have no one even as electable as John Kerry waiting in the wings -- considering Hillary's permanent and ever-increasing negatives?

I suspect it's a combination of all those factors, which doesn't bode well for the party. Hillary is not in as good a position to capitalize on an Obama implosion as Kerry was to exploit the Dean political suicide. Everyone -- including formerly ardent Clinton supporters -- now realizes that for the Clintons, it's all about the Clintons, who'll do anything to win. "Anything" includes playing a despicable brand of racial politics and betraying the Democrats' unwavering, albeit disingenuous battle cry since Bush-Gore 2000: "Every vote must count."

The leftist blogs are getting ever-more vicious against Hillary and increasingly indignant over any criticisms of their would-be champion, Obama. After all, what good did it do for them to settle for Kerry last time? They've been waiting a long time now for a full-blown anti-war standard-bearer.

So Democrats are faced with the dilemma of sticking with Obama, who truly might be approaching unelectability, or turning to the obnoxious and narcissistic power couple for whom the magic has long since disappeared.

If Obama does well from this point forward, the superdelegates will have no choice but to endorse him because even concerns of electability would not justify the divisions, including along racial lines, that would ensue should the party brokers cashier him. If Hillary marginally -- but not significantly -- outperforms Obama, the same principles will apply.

Only if Hillary wins consistently and decisively from now on, to the point of overtaking Obama in the popular vote, will she have the slightest chance of credibly arguing that superdelegates should go her way. Even then, unless Obama fully gets on board a Hillary ticket -- especially by way of the second slot -- there will be hell to pay in the party for years.