Obama's Weaknesses Off Limits to Hillary 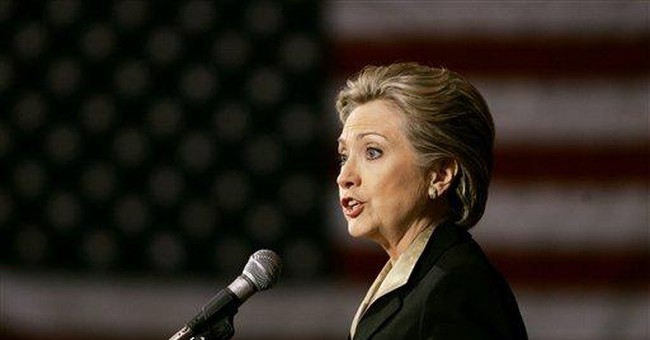 Poor Hillary. She can't afford to attack Obama where he's vulnerable, but she can't afford not to. Even if she does, it's likely it won't resonate with a leftist base made to order for Obama. Worse yet, it's probably too late anyway.

The irony is that if Hillary had been willing to be who she really is -- an antiwar leftist -- she'd probably be in the driver's seat right now. But her calculated and inconsistent shift to the center several years ago in anticipation of a general election created a gigantic Obama-shaped hole on the left.

Hindsight reveals that Hillary's strategy of holding herself out as the battle-tested, experienced candidate was ill-conceived. Not only was it untrue -- most of her experience was vicarious, which doesn't really count -- but the very theme of experience did not play well with a leftist base that was agitating for change, radical change, even if it had to come from a greenhorn. Hillary's claim of mature leadership just reinforced that she is part of the Washington establishment that gave us Iraq.

Even if that issue is becoming moot, its bitter memory is not. Hillary will always be damaged goods to the unforgiving antiwar left, no matter how often she pretends she was duped by a "dope" into voting for the resolution authorizing war.

Of course, Hillary says she's for change, too -- she wants to revert to the Clinton glory years. But with Bill's unattractive side -- defensive, combative, narcissistic -- in such prominent display on the campaign trail, voters are reminded more of the Clinton scandals than their so-called glory years. Simply put, the left wants change, and Hillary has no credibility as a change agent.

So where is Obama vulnerable? I believe he does have a glaring weakness, but Hillary is uniquely positioned not be able to exploit it.

Not long ago, Hillary added to her brief against Obama the charge that he is all form and no substance, flowery speeches without specifics, promises without solutions. I think she was close with this, but she slightly missed the mark.

Just because Obama is given to lofty oratory and inspires hope with platitudes doesn't mean he's an empty vessel. I'd fear an Obama presidency much less if he were just an empty vessel.

We underestimate him at our peril. He is plenty smart and quite capable. And he does have an agenda that, sadly for us, is substance-rich. His generalities-laden, silver-tongued optimism conceals a hard-core leftist blueprint for this country that would make Dennis Kucinich look like Milton Friedman.

Obama's fancy speech doesn't reveal emptiness as much as a lack of realism and, possibly, deception. He waxes eloquent about unity, bipartisanship and hope. But does anyone, let alone Hillary, ever ask him to explain precisely how he would achieve such harmony when pursuing a far-leftist agenda that is anathema to at least a majority of this center-right nation?

How unified do you think Americans would be if Obama were to pursue a policy of retreat and defeat in Iraq just as we are on the verge of wining there? Will the right sit idly by while he implements his version of socialized medicine? How about more onerous taxes? Further entitlement spending? Open borders?

As a Hail Mary, perhaps Hillary could say: "Barack makes nice-sounding words. But he's not being straight with you. I'll be straight with you. We Democrats do offer hope, but it's not the kind of hope Republicans are going to like. We can't promise you we'll achieve perfect harmony or bipartisanship. In fact, we can pretty much guarantee Republicans will try to obstruct our program for change -- you've seen how they've blocked our plans since we took control of Congress -- because we have a different vision, a progressive vision looking to the future. Barack gives you the false hope that this is going to be easy. I'm telling you the truth -- I'm giving you the reality. Like at all other points in our history, it is going to be a struggle against those who don't share our vision. But it will be worth it, and we'll prevail, because we have the right vision, the noble vision that is best for the people and reflects their will."

The problem is that Hillary might even be worse off using that approach because to attack "hope" and to try to put a damper on Barack's infectious optimism is like trying to badmouth motherhood and apple pie.

Nor is she, being sympathetic to socialism herself, in a position to point out Obama's inconsistency in pretending to love individual responsibility and entrepreneurship while recommending mostly government-based solutions.

Let's face it: Short of a major scandal or a vice-presidential nod, Hillary's pretty much out of luck.