No, School Boards Are Not 'Banning Books'

David Harsanyi
|
Posted: Mar 25, 2022 12:01 AM
Share   Tweet
The opinions expressed by columnists are their own and do not necessarily represent the views of Townhall.com. 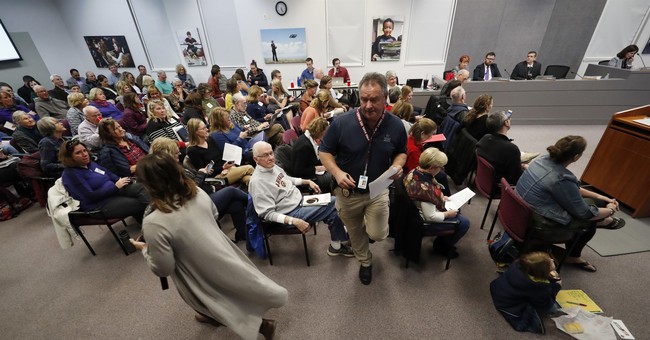 Accusations of left-wing free-speech authoritarianism -- whether through corporate restrictions, the state targeting "misinformation," the shouting down of dissent in universities or the canceling of dissenting voices -- are well-documented. Attempting to even the ledger, liberals have begun alleging that conservatives are engaging in "book bans" in public school districts.

The newest outrage on this front comes from a ProPublica investigation in which Superintendent Jeremy Glenn of Granbury Independent School District in North Texas is taped saying chilling things like: "I don't want a kid picking up a book, whether it's about homosexuality or heterosexuality, and reading about how to hook up sexually in our libraries." ("Minutes later," reports ProPublica, "after someone asked whether titles on racism were acceptable, Glenn said books on different cultures 'are great.'")

ProPublica repeatedly refers to the efforts of a volunteer committee set up to review titles as a "book ban." This is a category mistake. Public school curriculum and book selection are political questions decided by school boards. Schools have no duty to carry every volume liberals demand.

Here are some examples:

"The three books the committee voted to remove were 'This Book Is Gay,' a coming out guide for LGBTQ teens by transgender author Juno Dawson that includes detailed descriptions of sex; 'Out of Darkness' by Ashley Hope Perez, a young adult novel about a romance between a Mexican American girl and a Black boy that includes a rape scene and other mature content; and 'We Are the Ants' by Shaun David Hutchinson, a coming-of-age novel about a gay teenager that includes explicit sexual language," according to ProPublica.

Now, though I'd always rather see more books on shelves than fewer, Glenn's position isn't unreasonable. If parents want, they can, in only a few minutes, order "This Book Is Gay," "Out of Darkness," or "We Are the Ants" at a reasonable price. But Granbury Independent School District has no constitutional obligation to stock its shelves with novels touching on rape, abortion or transgenderism; there is no tenet of free expression that demands libraries make books on racial identitarianism available to kids; there's no rule that state schools must keep books on a shelf in perpetuity simply because a librarian ordered it. If such requirements did exist, do they also have a duty to carry "The Road to Serfdom" or "The War Against Boys"? Why are schools banning Heroes of Liberty or Ben Shapiro's books?

Refusing to carry a book is not tantamount to the heckler's veto, now regularly used by woke college students to shut down ideas in institutions where ideas are meant to be debated. Elementary-school-age kids do not get to choose the topics they learn. Adults do. The debate is about who gets to make that decision: parents or administrators?

Parents who choose to live in conservative communities are now expected to adopt progressive curricula and ideas. The same people bleating about "democracy" are suddenly aghast at the prospect of school boards, elected by parents, using the same powers that districts around the country take for granted. Libraries in liberal school districts aren't -- and I can attest to this personally -- home to anti-abortion messaging or books about teens finding God and rejecting gay lifestyles. The cultural conditioning that goes on in blue districts is simply relentless. And the kids -- unless their parents are wealthy or make great sacrifices -- are usually held captive in state schools. Most of these districts never need to remove books (unless, perhaps, we're talking about classics like "To Kill a Mockingbird" or "Huckleberry Finn") because heterodox titles have never been welcomed in the first place. But why should parents in Montgomery County, Maryland, be empowered in ways that the parents of Hood County, Texas, are not?

If you don't like this kind of stifling state-run school system, join me in advocating for choice. But you can't have it both ways.