David Harsanyi
|
Posted: Mar 11, 2022 12:01 AM
Share   Tweet
The opinions expressed by columnists are their own and do not necessarily represent the views of Townhall.com. 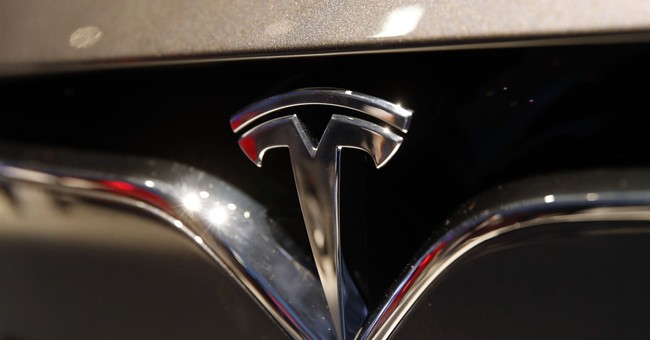 "Well, you all imagined it," Vice President Kamala Harris commented during a so-called clean-transit event, where she appeared with her fellow tautologist, Secretary of Transportation Pete Buttigieg. "That's why we're here today -- because we have the ability to see what can be, unburdened by what has been, and then to make the possible actually happen."

When Harris and Transportation Secretary Pete get together, it's Platitudicon. As it was this week, when, as the reality of imminent historic gas price spikes was hitting Americans, the duo spent the day promoting electric cars, the Green New Deal and the Environmental Protection Agency's soon-to-be-tightened emissions standards.

When it comes to energy, the Democrats adopt a bizarre elitist disconnect: Propelled by theological belief in end-of-days climate alarmism, they assume that Americans will join them in losing all sense of perspective and proportionality.

Despite the perpetual championing of electric vehicles, less than 1% of cars, SUVs and light trucks on the road in the United States are electric. The average cost of an electric car is $55,000. Even with layers of subsidies that artificially bring it that low, the average price of an electric car is around $19,000 higher than the price of an average gas-powered vehicle. The average Tesla goes for around $75,000. Leasing the Model S, not at the high end of the Tesla line, is still likely to cost you more than $600 per month. Not everyone is pulling in Ocasio-Cortez bucks.

Even if they are, they're probably more concerned about functionality than pricey virtue-signaling. Why would a couple with kids shun a perfectly useful gas-powered car that, until recently, could be cheaply fueled and easy to drive any distance and in any environment? Fossil fuels are the most efficient, affordable, portable and useful form of energy. And we have a vast supply of them. In recent years, the U.S. has become the world's largest oil producer. There are tens of billions of easily accessible barrels of offshore fossil fuels here at home -- and much more around the world. We have centuries' worth of it waiting in the ground. Four dollars a gallon is a choice.

Every plan to fight climate change either creates fabricated markets to raise prices on fossil fuels or creates artificial scarcity. Biden says this is the moment we become a leader in "exporting clean energy to countries all around the world." The president wants half of new cars produced in the United States to be electric by 2030 (the year we will miraculously reach zero emissions), not because consumers demand them but because technocrats decided to manipulate the market and coerce Americans to drive them. Ford and GM promise to dramatically scale back gasoline-powered cars and become electric-car manufacturers by 2035 because government promises "investments" and subsidies. Car companies know they're too big to fail.

And, in the meantime, let them eat cake. "Today, the average gas price in America hit an all-time record high of over $4 a gallon," Stephen Colbert ($10 million yearly salary) joked. "OK, that stings, but a clean conscience is worth a buck or two. It's important. I'm willing to pay $4 a gallon. Hell, I'll pay $15 a gallon because I drive a Tesla."

If sending envoys to Iran and Venezuela to beg for oil soothes your principles, so be it. But Colbert's comment is almost as funny as Buttigieg telling Americans that "families who own (an electric) vehicle will never have to worry about gas prices again." Where do Buttigieg and Colbert believe the power used to charge those electric cars comes from? Over 70% is from oil, natural gas, coal and nuclear. Nuclear energy, in fact, is a cheaper and more practical alternative to revamping an entire $22 trillion economy than the high-minded, extortionately expensive proposals meant to cleanse the consciences of climate scaremongers.

Meanwhile, the same administration that argues that increasing domestic capacity and allowing more North American imports would have no immediate impact on spiking gas prices proposes that you buy yourself an expensive, impractical luxury item. The difference between them and Marie Antoinette is that the latter never actually said, "Let them eat cake."