David Harsanyi
|
Posted: Jan 14, 2022 12:01 AM
Share   Tweet
The opinions expressed by columnists are their own and do not necessarily represent the views of Townhall.com. 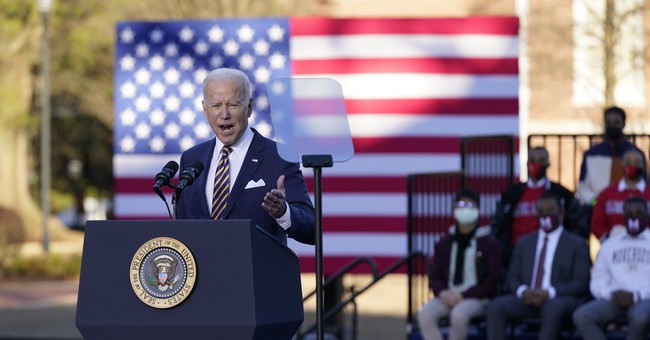 "The next few days, when these bills come to a vote, will mark a turning point in this nation's history. Will we choose democracy over autocracy, light over shadows, justice over injustice? I know where I stand. I will not yield. I will not flinch. I will defend your right to vote, our democracy against all enemies foreign and domestic. And the question is: Where will the institution of the United States Senate stand?"

These were little more than the mendacious ravings of a demagogue.

Biden's argument is predicated on the idea that anyone who continues to support the legislative filibuster -- a Senate rule the president defended for nearly 50 years -- or voter ID laws, or time restrictions on mail-in ballots, or consistent hours for early voting, or bans on ballot harvesting, is no better than Bull Connor. "Do you want to be on the side of Dr. King or George Wallace?" was the false choice offered by a man who repeatedly praised Wallace, and other segregationists, early in his career.

The president suggested that anyone opposing the Democrats' voting rights bill was not only a bigot but a seditious "domestic" enemy of the United States -- a designation that now probably includes six Democratic senators, if not more. The president pronounced the Senate a "shell of its former self," lamenting that the GOP had used the filibuster over 100 times in the past year, skipping the inconvenient fact that Democrats had done so over 300 times the preceding four years. Biden, "the institutionalist," then unloaded a litany of completely misleading contentions about voting laws to justify his abandonment of principle.

And the reason Biden is compelled to lie about virtually every aspect of the Georgia voting law is that the specifics are actually quite popular and do not inhibit a citizen from casting a ballot. Most of the requirements Biden contends are now compulsory for democracy to properly function had only been instituted in the past few years -- many of them only during the last election. Biden's comparing Jim Crow to contemporary voter integrity laws is detestable. One was a violent suppression of the minority vote; the other was giving voters only 11 weeks before an election to request a ballot and declining to keep expanding voting into the weekend.

At this pace, Democrats will be arguing that disenfranchisement of illegal immigrants is the manifestation of the Dixiecrat agenda by 2024.

ID requirements are what the left detests most, yet this is the provision they talk about least. Why? Most polls find overwhelming majority support for limiting early voting hours and requiring photo IDs to vote. Fascists in Colorado and Connecticut and most other states, not only Georgia, still demand a person provide government-issued ID to vote. They, just like Georgia, allow voters without ID to provide the last four digits of their Social Security number, a bank statement or utility bill, a paycheck or any other government document with their name and address. (Maybe if states allowed vaccine passports to suffice, Democrats would be up for it.)

But most Americans -- most people in the free world -- have believed it eminently reasonable to expect voters to identify themselves before participating in democracy. If Democrats believed the vote was sacred, so would they. It's the Democrats who are advocating overturning the will of voters in Georgia and elsewhere. Let's remember that H.R. 1 "voting rights" bill would have compelled states to allow ballot harvesting, to ban voter ID laws, to allow felons to vote and to count mail-in votes that arrive up to 10 days after Election Day.

The president sprinkled his speech with feigned indignation and lots of podium pounding. Unable to contain his penchant for fabulism, he seemed to joke about being arrested ("the first time") during a civil rights march. Maybe Biden was confusing that incident with the time he wasn't arrested in South Africa for trying to see Nelson Mandela or didn't defend the Black Panthers in court or never participated in a sit-in.

But one can suspect most Democrats understand well that this is all a nasty bit of cynical political theater since there is little chance of nuking the filibuster. Biden's attempt to launch his entire agenda in a single reconciliation moonshot stuffed with progressive extravagances failed to get a simple majority. Stymied, the president has decided to preemptively undermine confidence in the 2022 and 2024 elections, smearing half the country as racists while cosplaying as a civil rights hero. "The Big Lie," indeed. The consequences of this will be the further deterioration of trust in elections. More division. More anger.