David Harsanyi
|
Posted: Jun 25, 2021 12:01 AM
Share   Tweet
The opinions expressed by columnists are their own and do not necessarily represent the views of Townhall.com. 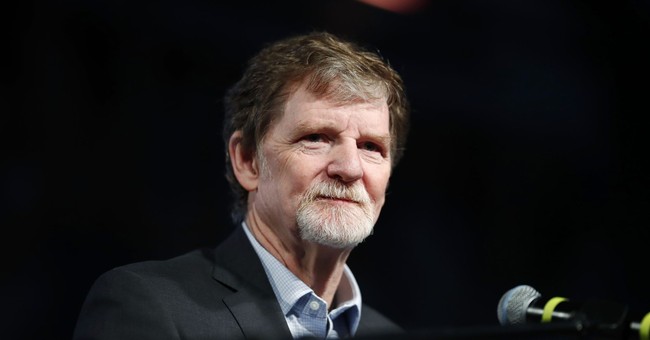 I've been writing about Colorado cakemaker Jack Phillips' fight against cultural authoritarians for a long time. This past March, I noted that Phillips would probably be badgered into the grave. And this week, Denver district judge A. Bruce Jones again found that the state could compel speech, claiming that Phillips had acted unlawfully when refusing to create a cake that celebrated the alleged gender transition of a Colorado activist.

When Phillips declined to participate in the wedding of David Mullins and Charlie Craig back in the summer of 2012 -- this was before Obergefell v. Hodges and before gay marriage was even legalized in Colorado -- he made himself the target of harassment by activists and "civil-rights" commissions that set out to destroy his business over a thought crime; by courts that set out to corrode religious liberty and free-speech protections; and by media that either don't understand or don't value free expression anymore.

Journalists have been misleading their audiences about this case for nearly a decade. So, it needs to be repeated that Phillips never turned a gay couple away from his shop. He never "refused" to sell a gay couple his products. Mullins and Craig were free to buy anything they desired from Masterpiece Cakeshop. They weren't free, however, to force Phillips to create something that conflicted with his long-held religious beliefs. One of the most basic ideals of liberty is that we don't coerce individuals to say things -- or refrain from saying things -- in ways that violate their conscience.

Yet, in 2012, the Colorado Civil Rights Commission set about bankrupting Phillips by asserting that his refusal to bake a cake was driven by a deep-seated personal animosity toward gay customers rather than by his Christian faith. Now, even if this had been the case, and the commissars could divine Jack's intentions, there is no addendum to the First Amendment that says we must spare the feelings of gay couples or anyone else.

But, of course, none of the evidence backed the commission's assertion. In fact, when Phillips and his wife opened their business in the early '90s, they decided Masterpiece Cakeshop would adhere to their values. While those values changed for some, they didn't for this couple, which is why they still won't bake cakes with alcohol, salacious ones for bachelor or bachelorette parties, or even Halloween cakes.

Setting aside Rice's fatuousness, the fact is that Phillips didn't hurt anyone. When activists first began picketing Masterpiece Cakeshop, their rainbow flags were set up in a busy intersection near the shop -- right across the street from another bakery that would make any cake they wanted. Within the five-square-miles radius of Masterpiece were at least a dozen places that would have made a gay-marriage cake.

It was Rice who intended to hurt people. Her words, and the actions of the commission, were a warning to Christian businesses that a failure to take orders from a culturally approved class of customers could mean destruction of your livelihood. Indeed, Rice's words also allowed the Supreme Court to punt the case. Masterpiece Cakeshop v. Colorado Civil Rights Commission, a 7-2 Supreme Court decision in Phillips' favor, was not only narrow but also largely useless. The only real mistake the commissars had made, it seems, was openly demeaning their target's faith. They would do better next time.

In June 2017, the very day the Supreme Court agreed to hear Phillips' case, Autumn Scardina, a transgender activist in Denver, called Masterpiece Cakeshop and requested a custom cake with a blue exterior and a pink interior to symbolize a gender transition. Phillips turned down Scardina, as the lawyer knew he would. "I was stunned," Scardina would laughably inform the Colorado Civil Rights Commission later.

Scardina hadn't tripped over the nation's most famous Christian baker by happenstance. Phillips is now back where he started, guilty of a thought crime. Scardina, in fact, admitted this was about wanting to "correct the errors" in Phillips' thinking. And an unprincipled judge such as Adams has affirmed the right of certain people to impel speech on others. Let's hope it's temporary. What is certain is that the crusade to destroy Phillips -- and many others like him -- will continue until the Supreme Court upholds the clear language and intent of the First Amendment.