The Electoral College, Now More Than Ever

David Harsanyi
|
Posted: Nov 27, 2020 12:01 AM
Share   Tweet
The opinions expressed by columnists are their own and do not necessarily represent the views of Townhall.com. 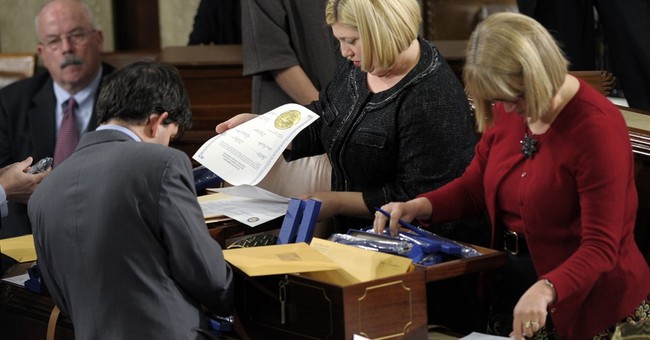 One must read to the end of The Washington Post's editorial, "Abolish the electoral college," before hitting on the real reason the Post's editors want to upend the long-standing constitutional institution. "Mr. Trump's election was a sad event for the nation," notes the Post, "his reelection would have been a calamity."

Maybe, maybe not. That's a matter of partisan perspective. Those who are genuinely concerned about the future of American governance would be calling to strengthen institutions that provide political stability, not destroy them. But when your concerns about "American democracy" are really just a euphemism for partisan power grabs, you end up making lots of sloppy arguments.

"It is alarming that a candidate came so close to winning while polling more than 5 million fewer votes than his opponent nationwide. The Electoral College, whatever virtues it may have had for the Founding Fathers, is no longer tenable for American democracy."

The Electoral College exists to diffuse the very thing the Post claims is most beneficial: the "overbearing majority," as James Madison put it. If majoritarianism is truly always the best means of deciding an issue, then the Post would support a mere majority of states being able to overturn the First Amendment or decide abortion policy.

But if states still matter, then the Electoral College's "virtues" are far stronger today, in an era when federalism is ignored and Americans are more likely to cluster in urban areas, than it was in the founding generation when Washington was largely powerless. It is one of the institutions that makes a "democracy" tenable in a truly diverse and sprawling nation.

On the most basic level, the Electoral College helps compel presidents to govern nationally rather than represent a handful of states. We saw it when Biden was forced to temper his positions on fracking and defunding the police because he had to appeal to those outside of urban areas. If he is to be successful, Biden must govern in ways that are popular to diverse cultural and geographical areas -- such as North Carolina, Wisconsin and Arizona, and not just California and New York.

Running up the score in big states gives partisan activists fodder, but it is irrelevant. If Donald Trump ran for the national vote, he might well have won it by spending all his time in California and New York talking about things that matter to Californians and New Yorkers. The entire dynamics of elections would be different. Our election is geared toward winning states, not people.

It should also be noted that the system The Washington Post wants to nix has been the most stable in the world. A direct national poll would be a radical change, even by international standards. Most free nations don't have democratic majority votes for their executives. Parliamentary systems, for example, are not national polls. Between 1935 and 2017, the majority of British voters backed the party that formed a government on only two occasions. Voters do not even cast a ballot directly for the prime minister. In 2019, Canadian prime minister Justin Trudeau "lost" the "popular vote." By eliminating the Electoral College, we are far more likely to spark the creation of smaller parties that would keep presidents from gaining a majority.

Of historical interest: Vladimir Putin was elected through a direct national poll.

I will spend the rest of my life pointing out that presidents don't "win" or "lose" the popular vote -- because there is no "popular vote," nor has there ever been one, nor does anyone compete for it. Just today, Reuters informed us, "Trump's open defiance of Biden's victory in both the popular vote and Electoral College appears to be affecting the public's confidence in American democracy." The entire statement, from "popular vote" to "American democracy," makes me cringe. It's this kind of coverage that allows The Washington Post and other critics of traditional constitutional governance to convince its audiences that presidents are winning elections even while really "losing" them. It bodes poorly for our future.