Nancy Pelosi Is Already Attacking the Legitimacy of the 2020 Election

David Harsanyi
|
Posted: Nov 22, 2019 12:01 AM
Share   Tweet
The opinions expressed by columnists are their own and do not necessarily represent the views of Townhall.com. 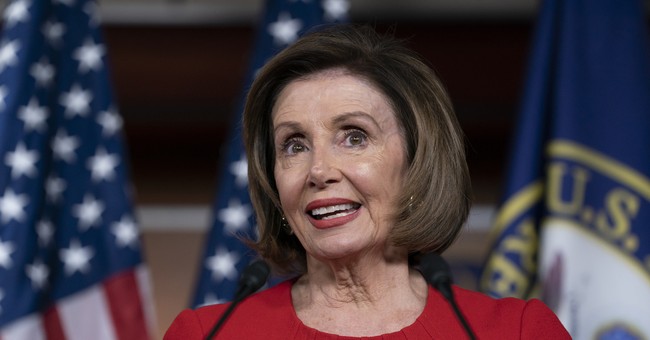 "Nancy Pelosi just stated that 'it is dangerous to let the voters decide Trump's fate.' @FoxNews In other words, she thinks I'm going to win and doesn't want to take a chance on letting the voters decide. Like Al Green, she wants to change our voting system. Wow, she's CRAZY!" tweeted Donald Trump Tuesday.

Well, not exactly. Trump's tweet quotes a Fox News reporter summarizing Pelosi's position, not the speaker's statement verbatim. Left-wing Twitterverse, of course, immediately jumped all over the president's clumsy wording and acted as if the substance of his contention was wholly untrue. It wasn't.

In her "Dear Colleague" letter pushing back against Republican anti-impeachment talking points, Pelosi wrote this: "The weak response to these hearings has been, 'Let the election decide.' That dangerous position only adds to the urgency of our action, because the President is jeopardizing the integrity of the 2020 elections." Is he?

If a Republican had suggested that a presidential election was a "dangerous" notion, he would have triggered around-the-clock panic-stricken coverage on CNN and a series of deep dives in The Atlantic lamenting the conservative turn against our sacred democratic ideals.

What Pelosi has done is even more cynical. She's arguing that if Democrats fail in their efforts to impeach Trump -- and, I assume, remove him from office -- then the very legitimacy of the 2020 election will be in question before any votes are cast.

Though most liberals have long declared the 2016 contest contaminated, as far as we know, absolutely nothing -- not even the most successful foreign efforts in "interference" or "meddling" -- damaged the integrity of the election results. Notwithstanding the belief of more than 60% of Democrats, precipitated by breathless and often misleading media coverage, not one vote was altered by Putin, nor was a single person's free will purloined by a Russian Twitter bot or Facebook ad.

And, contra Pelosi's implication, whatever you make of Trump's request from Ukrainian president Volodymyr Zelenskiy to investigate Joe Biden's shady son, not one voter will be restricted from casting a ballot for whomever they please in 2020. In truth, voters will know more about the inner workings of Trump's presidency than they have about any other administration in memory. Maybe they care, maybe they don't, but that's not up to Pelosi.

Rather than safeguarding the integrity of our elections, Democrats have corroded trust in them. Post-2016 calls for increased control over speech on the internet, for instance, pose a far greater danger to American freedoms than anything our enemies at the Kremlin could cook up. And if the contention is that the only truly legitimate election is one that is free of any attempts to mislead voters, as seems to be the case, then we might as well close up shop. The presence of unregulated political rhetoric is a feature of a free and open society. We will never be able to, nor should we aspire to, limit discourse.

It shouldn't be forgotten, either, that this habit of injecting doubt into the electoral process is nothing new. For the past 20 years (at least), Democrats have shown a destructive inability to accept the fact that a bunch of voters simply disagree with them. If it's not "dark money" boring into their souls, it's gerrymandering, special interests, confusing ballots, voter suppression, crafty Ruskies or the Electoral College. Democrats can't lose on the merits. Someone, somewhere, has fooled the proles into making bad decisions.

All that said, it is Pelosi's constitutional prerogative to try to impeach Trump for any reason she sees fit, even if her goal is only to weaken the political prospects of her opponent. No, it isn't a "coup," but it's certainly not a constitutional imperative, either. It's a political choice.

In the end, the presidency happens to be one of the things we do decide via elections. That will almost surely be the case when it comes Trump, and Pelosi knows it. And if Trump isn't removed by the Senate, and if the results don't go the way Pelosi hopes, she's preemptively given Democrats a reason to question the legitimacy of yet another election.