The GOP Repeal Plan Sucks. But Is it Better Than Nothing?

David Harsanyi
|
Posted: Mar 11, 2017 12:01 AM
Share   Tweet
The opinions expressed by columnists are their own and do not necessarily represent the views of Townhall.com. 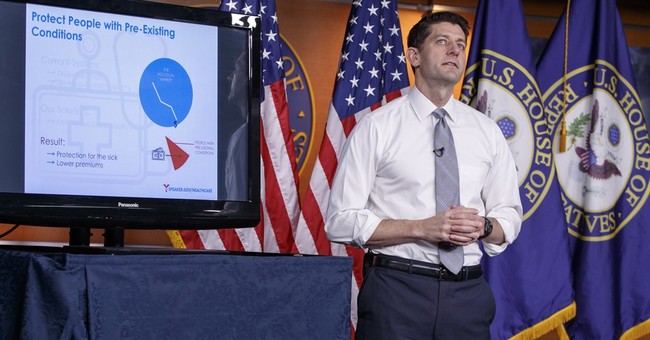 Trending
First of all, the preferred free-market plan for health care policy should be no plan whatsoever. The idea that we need a federal top-down strategy to manage a huge chunk of the economy is at the very heart of the problem. We don't need a federal plan for health care. Yet Republicans have allowed liberals to frame the entire health insurance debate in these anti-market terms.

So the American Health Care Act, or AHCA, is obviously weak tea, falling far short of a promised free-market solution, much less a full "repeal" of Obamacare. It's a half-measure that endeavors to fix Obamacare with small doses of deregulation while failing to repeal its core. It's almost as if Republicans were trying to mollify their constituents and save Obamacare at the same time.

President Donald Trump tweeted something about a three-phase rollout, but the specifics of the other two parts have yet to be confirmed. Perhaps the full proposal will reflect better on Republicans. But considering the noise moderate senators have been making and Trump's own views on entitlement programs, it's unlikely to meet conservative expectations. So what can be done?

In a piece highly critical of the plan, the Washington Examiner's Philip Klein, who has done some of the most insightful writing on Obamacare, states, "the GOP will either be passing legislation that rests on the same philosophical premise as Obamacare, or will pass nothing at all, and thus keep Obamacare itself in place." What if this is the choice?

We know the Democratic Party's plan for health care: Constrain markets to create monopolies that can be controlled by a federal regulatory regime (this is why liberals oppose markets expanding across state lines); and rather than worrying about access, choice or cost, continue to incentivize the growth of the welfare state. When this situation becomes untenable, pass single-payer. What Democrats understand but Republicans often don't is that you can reach your goals incrementally.

Obamacare was ignored as soon as it was passed. A law that was sold as a tool to reign in rising costs quickly became a moral edifice that alleviated an imaginary humanitarian crisis (the defense of it is now almost exclusively focused on people losing Medicaid). Meanwhile, Obamacare was used as a tool for social engineering and coercion, allowing technocrats to dictate how a third of the economy functions. If you control the bureaucracy, laws become incredibly malleable. One day, Democrats will be back and, without even partial repeal, all the same mechanisms will be available to them.

So the question remains: Is something better than nothing?

Halting federal funding of the nation's largest abortion mill is a victory. Offering states more flexibility to run their own Medicaid programs is a victory. Expanded health savings accounts and the creation of real-life illustrations of successes is promising. Getting rid of the individual mandate is a victory, as is allowing consumers to purchase insurance across state lines. Repealing nearly all of Obamacare's taxes -- other than a postponement of the Cadillac tax -- is a win.

It's possible, of course, that AHCA negotiations will begin with moderate proposals and transform into something free market-oriented. With widespread opposition from conservative groups -- Heritage Action for America, FreedomWorks, etc. -- the American Health Care Act looks like a non-starter. Then again, who are we kidding? The truth is that conservatives probably find themselves in the same situation frustrated liberals did in 2009. Despite prevailing mythology, Democrats never compromised in good faith with the opposing party; they compromised with their own moderates. It only takes a few senators to hold an entire party hostage.

It's also worth pointing out that no federal entitlement program has ever been repealed or replaced, or really even weakened. This was the fight that spurred Republicans to win hundreds of seats and take the House, Senate and presidency. The fact is that many politicians who benefitted most from Obamacare's failures were lying to their constituents. Either these Republicans don't have the mettle to back a full repeal or they don't have the ideas to create a new plan. So perhaps Obamacare Lite is preferable to Obamacare because it's the best this crop of legislators is going to do. Also, as history has shown, making substantive policy changes doesn't get any easier as a term wears on. This might be the last chance to do anything.

Another infuriating aspect of this fiasco is that Democrats will treat any Obamacare "repeal" bill as if it were an assault on all that is holy and patriotic. This rhetoric shouldn't have inhibited Republicans; it should have freed them to pass bills that incorporate the ideas they supposedly believe in. Why would they let the same people who told America that Obamacare would be a political and functional success now lecture them on how unpopular a repeal bill will be?

It's just one of the many mysteries of the GOP.