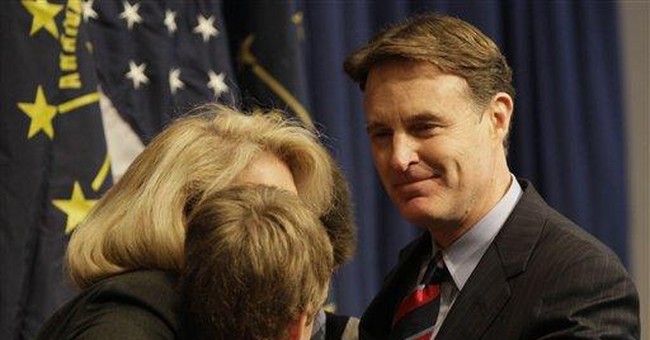 It's peculiar to see so many people who embark on political careers claim later that they have deep-seated moral aversions to politics. Hey, they may join parties, but they simply can't tolerate partisanship.

When Sen. Evan Bayh, D-Ind., announced his decision not to run for re-election this year, he became the latest spurned statesman to sound the phony alarm about the "brain-dead" and cancerous hyper-partisanship that allegedly is calcifying now in Washington.

No one can blame an honest man for fleeing politics, but Bayh should not have denigrated one of the vital functions of governance in a free society: partisanship. One can be a partisan and have brains. But someone with brains should not confuse his own political impotence with the End of Days.

Is partisanship, hyper or otherwise, destructive?

That's a matter of perspective, I suppose. For guidance, let's turn to Rep. Barney Frank, powerful chairman of the House Financial Services Committee, who recently grumbled to a group of college students that partisanship is getting "out of control" in Congress.

Scary stuff. Yet in a 2004 piece written by Frank for The Gay & Lesbian Review, titled "In Praise of Partisanship," Frank asserted that "partisanship, properly understood, is not only a valid approach; it is in our current political climate the most effective way to fight for some very important values."

So, you see, partisanship is valid when "properly understood" and when "important values" are at stake in a "political climate" that is approved by ... well, the right people. The congressman wrote this when he was in the minority (the right "political climate," no doubt) and he was yearning for an influential chairmanship (what politicians refer to as an "important value"). And that is how to understand the situation properly.

Or take the Rev. Jim Wallis, a well-known progressive activist, whose religious affiliation gives his comments unwarranted gravitas. He told The Denver Post this week that he believes that "the nation is in deep trouble. The political system is broken."

Really? "Deep trouble"? Perhaps -- if the political system you're pining for happens to be one-party rule. I mean, is there a beer hall putsch in the works? Is the wood being gathered for guillotines? Have the midterm elections been canceled?

When the sitting vice president guns down the former treasury secretary on a beach in New Jersey, politics might be broken. (Then again, let's also concede that dueling is, in general, more honorable than relying on 527s to do your dirty work.) But if Democrats, only a year after hosannas rained down on their man, aren't getting their way, it is no reflection on the system.

In fact, at the same time partisanship is unseemly, it is generally constructive. It is also the normal state of being. The two-party system, with all its obvious faults, allows most of you to vote for some generally acceptable envoy to advocate for whatever ideological belief system you've decided on that election cycle.

In this system, two powerful parties of consensus try to destroy each other and, at the same time, keep an eye on polls. And if polls are any indication, it seems as if the process is working quite well these days.

So relax; the republic will survive -- with partisanship and without Evan Bayh.