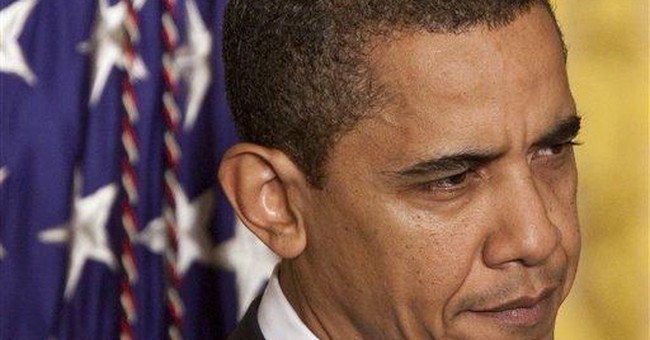 You may be aware already that journalists are likely to possess an aptitude for math that is on par with the average gerbil.

I, for instance, hand over delicate personal financial information to complete strangers and pay them to put "numerals" into brackets for the purpose of "subtraction" and "addition" -- because I, like half the Barack Obama administration, find paying taxes exasperatingly difficult and generally irritating.

Likewise, math, as we all know, sucks the fun out of everything. Only pointy-headed know-it-alls find math interesting. Society should shun these freaks relentlessly -- unless, of course, we need something from them, such as engineering or paychecks.

As many journalists struggle to define what a "fraction" is, how could they possibly be equipped to enlighten America about the abstraction of Washington's present spending?

And how can the average upstanding math-despising citizen wrap his or her head around the magnitude of these enormous budget dollars?

"There is a sense that when numbers are too big or too small, the brain just shuts off," Colin Camerer, a professor of behavioral economics at the California Institute of Technology, told Time magazine recently. "People either don't think about it at all or there is fear, an exaggerated reaction."

We call the latter sentence editorializing because fear is a wholly rational reaction to a trillion of anything.

Let's start with the national debt, which is about $10 trillion right now. The estimated population of the United States is 305 million, which means that each citizen's share (including babies and 90-years-olds) is about $30,000, or a full year of avoiding math classes at a midlevel college.

Folks all across the country have come up with entertaining formulas to explain the size of this debt. If you spent $1 every second, for instance, it would take about 400,000 years to get to $10 trillion. Or if you laid 10 trillion $1 bills end to end, apparently they would reach the sun and back almost five times over.

And, as Republican Mitch McConnell so creatively asserted during the recent stimulus bill debate, "If you started the day Jesus Christ was born and spent $1 million every day since then, you still wouldn't have spent $1 trillion." Which, even the faithful might admit, is nearly enough money to corrupt God.

These are cute examples, but still far too abstract.

How about this: If you wanted to use a protractor (my preferred method of calculation), the thing would have to be 75 stories high and 1 mile wide -- a claim that probably holds as much veracity as any of the above examples, though I made it out of whole cloth.

Maybe we need to think smaller then. So let's think about Obama's recently unveiled federal budget, which comes in at about $3.6 trillion. Also, let's take this moment to talk about the myth that George W. Bush heartlessly cut spending while in office, when he did the exact opposite -- in almost every area. Bush's budget grew from $2 trillion to $3.1 trillion during his presidency, or, adjusted for inflation, more money than is spent on your average war.

Now we have Obama's $3.6 trillion budget and his $1.75 trillion deficit, which supposedly will level out at about $700 billion a year in the future.

My meticulous calculations tell me that every American citizen will be on the hook for … a lot .

But the most important question we should be asking is nonmathematical: How many times has reckless spending in Washington made government more productive, responsive or moral?

I'm not sure what the formula is on that one, but the answer is zero. It's exceedingly possible that none of these numbers is close to being correct.