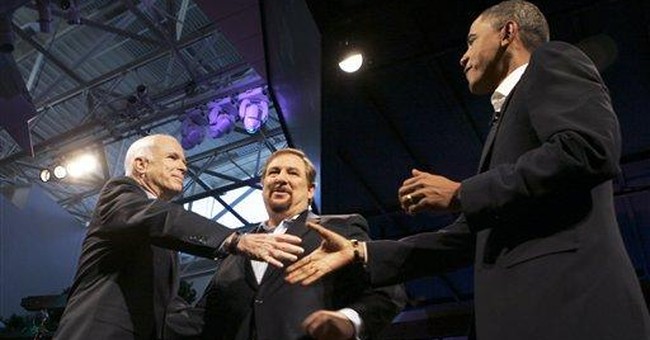 Lake Forest, Orange County—When President Bill Clinton played his saxophone on the late-night “Arsenio Hall Show” in 1992, it was obvious that presidential campaigns had changed. That evolution continued Saturday night when presidential candidates Barack Obama and John McCain made their first joint appearance of the 2008 campaign. This time, it was not in a televised debate moderated by reporters in a university auditorium, but at an evangelical church conducted over a cup of coffee with its pastor.

“The Saddleback Civil Forum on the Presidency,” moderated by mega-church pastor and best-selling author Rick Warren, turned out to be more interesting and politically important than one might have expected, as the presumptive nominees discussed heartland issues of leadership, worldview, domestic policy and America’s place in the world. Going in, the significance of the event seemed to be its church setting and audience of 2,200 church members, and the increasingly important evangelical Christian voter. From what I saw there, it was that—and more.

The two-hour forum was really the opening, the tone-setting lap of an Olympic presidential race, as the candidates contrasted sharply in both style and substance. Democrat Obama spoke for the first hour, with Republican McCain off-stage, unable to hear the questions that would be posed to him later. As expected, Obama was a great conversationalist, offering thoughtful answers to tough questions. Highly personal and seemingly impossible questions—what three people would you listen to as president, what is your greatest moral failure, what does faith in Christ mean to you—seemed like small hurdles for his nimble mind.

After a bit of a shaky start, McCain hit his stride with remarkably direct and energetic answers to the tough questions. Obama’s nuanced responses, in which he processed multiple sides of complex issues, contrasted with McCain's direct replies. When asked when a child’s human rights begin, McCain said straightforwardly, “at conception,” whereas Obama equivocated. On same-sex marriage or merit pay for teachers, again McCain stepped into the pitch with a solid hit, whereas Obama’s responses seemed more circular. As one pleasantly surprised evangelical leader said, “McCain is back on the straight talk express.”

The expectations game will be hard on Obama. He performed well, but that’s what people expect. McCain easily exceeded expectations. Obama’s deeper exploration of issues tells us how he would think about education or a global threat, but McCain’s straight talk says more clearly what he would do about them. Some of this is age and experience—McCain frequently told anecdotes to illustrate what he has done. It is also different backgrounds and training—a law professor like Obama is taught to see the difficulties and complexities, whereas a military officer such as McCain is schooled to find the path through them. One couldn’t help but think that Obama must sharpen his answers to one central point for the formal debates.

And what about those evangelical voters? In one way, Obama won points here just by being on the stage of an evangelical Christian church in conservative Orange County. Evangelicals, who constitute 20 to 25 percent of the national electorate, voted nearly 80 percent for George W. Bush in 2004, so sitting at the same table with the influential evangelical leader Rick Warren helps Obama. And he naturally speaks the language about his faith in Jesus Christ, evil, sin and salvation.

But McCain overcame his previous reluctance to speak clearly about his faith, stepping right into questions about his relationship to Christ (“I’m saved and forgiven”) or limiting the hiring policies of faith-based organizations (no, “it would severely cripple them”). Perhaps more important, McCain’s positions on the tough moral issues, such as abortion or same-sex marriage, clearly square better with evangelicals than Obama’s positions. In the end, however, Obama doesn’t have to win this group outright, but merely make an inroad, which seemed plausible Saturday night.

It was a dramatic couple of hours when a pastor and his church got candidates to grapple honestly and civilly with tough questions. By the end, it seemed clear that McCain’s straight talk express will present a formidable challenge to Obama, the great conversationalist.