Daniel Pipes
|
Posted: Apr 24, 2017 12:01 AM
Share   Tweet
The opinions expressed by columnists are their own and do not necessarily represent the views of Townhall.com. 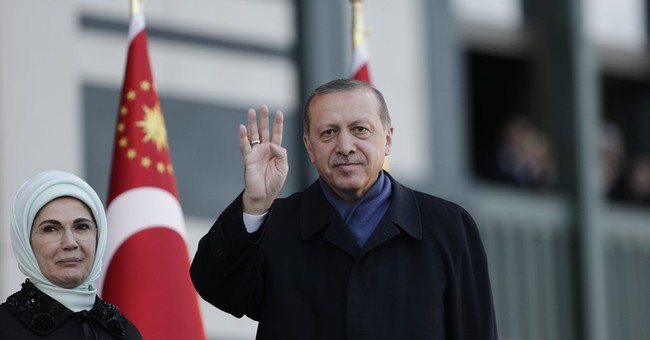 I nominate Recep Tayyip Erdogan, president of Turkey, as the most inconsistent, mysterious, and therefore most unpredictable major politician on the world stage. His victory in a referendum last Sunday formally bestows him with near-dictatorial powers that leave Turkey, the Middle East, and beyond in a greater state of uncertainty than ever.

Here are some of the puzzles:

Mystery #1: Holding the referendum. The Turkish electorate voted on April 16 in a remarkable national plebiscite that dealt not with the usual topic – floating a bond or recalling a politician – but with fundamental constitutional changes affecting the very nature of their government: Should the country continue with the flawed democracy of the past 65 years or centralize political power in the presidency? Under the new dispensation, the prime minister vaporizes and the president holds vast power over parliament, the judiciary, the budget, and the military.

Turks generally saw the 18 proposed changes to the constitution as a momentous decision. Famed novelist Elif Safak spoke for most when she wrote that Turkey's referendum "could alter the country's destiny for generations to come." After the referendum passed, some of those opposed to it cried in the streets. "Turkey as we know it is over; it is history" wrote Yavuz Baydar, a journalist. Defense & Foreign Affairs assessed the referendum as perhaps "the most significant and transformative change in Eurasia, the Middle East, and parts of Africa since the collapse of the USSR in 1990-91."

But there's a catch: for years Erdogan has held the powers the referendum gives him. He is the boss in Turkey who can bend the country to his wishes. Anyone – cartoonist, cafeteria manager, or Canadian – accused of "insulting the president" can be fined or jailed. A former prime minister or president who dares disagree with Erdogan vanishes from public life. He alone makes war or peace. What Erdogan wants, he gets, regardless of constitutional niceties.

Erdogan's fixation on officially imbuing the office of the presidency with the vast powers he already has in practice prompted him to steal an election, fire a prime minister, start a near-civil war with the Kurds, and provoke a crisis with Europe. Why did he bother with all this for a mere superfluity?

Mystery #2: The referendum results. Erdogan brought enormous pressure to bear for a momentous victory in the referendum. He made full use of his control of most media. Mosques were mobilized. In the words of one international organization, in several cases, "No" supporters "have faced police interventions while campaigning; a number were also arrested on charges of insulting the president or organizing unlawful public events." Opponents also lost their jobs, met with media boycotts, faced electricity outages, and got beaten up. A week before the referendum, Erdogan even announced that the "No" voters risk their afterlife. Then, according to a Swedish NGO, "widespread and systematic election fraud, violent incidents and scandalous steps taken by" the election board "overshadowed the voting."

Despite this, the referendum passed by a perplexingly meager 51.4 to 48.6 percent. Were it fairly conducted, why would Erdogan take the chance of losing, thereby diminishing his stature and reducing his sway? Were the referendum fixed – entirely possible, given his party's record – why was the affirmative vote so low and not a more imposing 60, 80, or – why not – 99 percent? The unimpressive 51.4 percent majority virtually invited opposition parties, supported by the European Union and others, to challenge the legitimacy of the referendum, raising awkward questions that Erdogan surely preferred not discussed.

Mystery #3: Gülen: Erdogan wantonly ended a key alliance with fellow-Islamist Fethullah Gülen, transforming a stalwart ally into a determined domestic opponent who challenged Erdogan's primacy and revealed his corruption. In his political war with Gülen, an elderly Muslim cleric living in the Poconos of rural Pennsylvania, Erdogan implausibly claimed that Gülen's movement had planned and led an alleged coup attempt in July 2016; then he cracked down on Gülen's followers and anyone else who met with his displeasure, leading to 47,000 arrests, 113,000 detainments, 135,000 firings or suspensions from jobs, and many, many more entering the shadows of "social death." Erdogan went further, demanding that Washington extradite Gülen to Turkey and threatening a rupture if he did not get his way: "Sooner or later the U.S. will make a choice. Either Turkey or [Gülen]"

Why did Erdogan pick a fight with Gülen, creating turmoil within Turkish Islamist ranks and jeopardizing relations with the United States?

Mystery #4: Semantic purism. The European Union reluctantly agreed to visa-free travel for 75 million Turks to its huge Schengen Zone, a benefit that would potentially allow Erdogan to push out unwanted Kurds and Syrian refugees, not to speak of increasing his influence in countries like Germany and The Netherlands. But the EU made this access contingent on narrowing Turkey's vaguely worded anti-terrorism laws; it demanded "revising the legislation and practices on terrorism in line with European standards." Erdogan could have made this meaningless concession and arrested anyone he wanted on other charges, but he refused to ("It's impossible to revise the legislation and practices on terrorism," intoned one of his ministers) and forewent an extraordinary opportunity.

Mystery #5: Canny or megalomaniacal. Erdogan became prime minister in 2003 and for eight years governed cautiously, overseeing remarkable economic growth, mollifying the military leadership that held the country's ultimate power, and successfully pursuing a policy of "zero problems with neighbors." In contrast to the hapless Mohammed Morsi, who lasted just a year as president of Egypt, Erdogan timed his moves with such deftness that, for example, hardly anyone noticed in July 2011 when he subdued the military.

That was then. Since 2011, however, Erdogan repeatedly has fomented his own problems. He gratuitously turned Syria's Bashar al-Assad from his favorite foreign leader (the two and their wives once even vacationed together) into a mortal enemy. He shot down a Russian fighter plane then abjectly had to apologize. He lost out on a pipeline transporting eastern Mediterranean gas to Europe.

He illegally built himself on protected land an absurdly large palace, the largest in the world since Nicolae Ceausescu's disastrous People's Palace in Bucharest. In a particularly ignoble farce, Erdogan showed up at the funeral of American boxer Muhammad Ali to give a speech, deliver presents, and have his picture taken with family members, only to be rejected in all these requests and slink back home.

He makes enemies everywhere he goes. In Ecuador, Erdogan's bodyguards handcuffed three pro-Kurdish Ecuadorian women and roughed up a parliamentarian who tried to protect them. When asked about this incident, the deputy speaker of Ecuador's legislature replied, "Until Erdogan's bodyguards assaulted a deputy, our public was not aware of Turkey. Nobody knew who was a Turk or a Kurd. Now everybody knows and naturally we are on the side of the Kurds. We don't want to see Erdogan in our country again."

What happened to the cunning leader of a decade back?

Erdogan's Islamist supporters sometimes suggest that he's on his way to declaring himself caliph. As the hundredth anniversary of the Istanbul-based caliphate's abolition approaches, he may find this tempting; depending on whether he uses the Islamic or Christian calendar, that could happen, respectively, on either March 10, 2021 or March 4, 2024. You heard it here first.

Sadly, Western responses to Erdogan have been confused and weak-kneed. Angela Merkel agreed to hauling comedian Jan Böhmermann into court for ridiculing Erdogan. Donald Trump actually congratulated Erdogan on his tyrannic victory and rewarded him with a meeting next month. And Australians defer on account of the Gallipoli commemorations.

It's time to see Recep Tayyip Erdogan for the dictatorial, Islamist, anti-Western egomaniac he is, and protect his neighbors and ourselves from the damage he is already causing and the greater problems to come. Removing U.S. nuclear weapons from the Incirlik air base would be one step in the right direction; even better would be to put Ankara on notice that its active NATO membership is in jeopardy pending a dramatic turnaround in behavior.