Daniel Pipes
|
Posted: Nov 14, 2016 12:01 AM
Share   Tweet
The opinions expressed by columnists are their own and do not necessarily represent the views of Townhall.com. 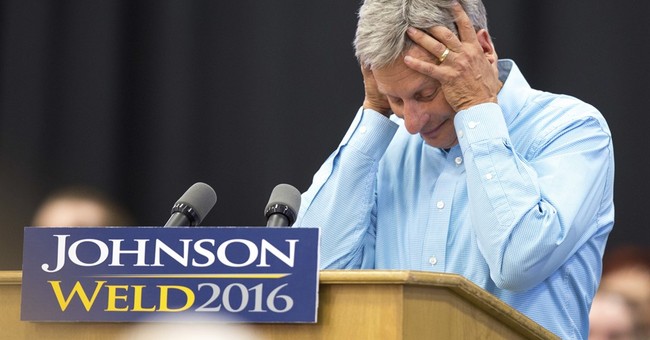 Gary Johnson, the Libertarian candidate for president, recently said something astonishing in defense of his foreign policy ignorance: "The fact that somebody can dot the i's and cross the t's on a foreign leader or a geographic location then allows them to put our military in harm's way." In other words, not knowing where a place is is a good thing because, in Alice Ollstein's witty summary, "you can't get into a war with a country you can't find."

As a student of U.S. foreign policy this struck a chord – not because it's an outlandishly whacky statement but precisely because it is mainstream. Really. Here are three notable precedents from the last century:

In 1919, President Woodrow Wilson dispatched the International Commission of Inquiry (commonly known as the King-Crane Commission) to Palestine and Syria to ascertain the political wishes of their residents. The leaders of this potentially influential commission monumentally lacked qualifications for the undertaking. Henry C. King was a philosopher and president of Oberlin College; Charles R. Crane was a busybody, antisemite, and heir to the fortune from his family's plumbing fixture company. Strikingly, their ignorance was seen as an advantage; a presidential aideexplained that Wilson "felt these two men were particularly qualified to go to Syria because they knew nothing about it."

The King-Crane Commission report, not surprisingly, was (in the words of historian Elie Kedourie) "as ill-informed as its influence on policy was negligible."

In 2003, the Bush administration announced John S. Wolf as the new U.S. presidential Middle East envoy (more formally, "chief, U.S. Coordinating and Monitoring Mission for the Middle East peace process"). The Washington Post (in an admiring article titled "For Mideast Envoy, Rookie Status May Be an Advantage") quoted a senior administration official saying that "It's a good thing that he has exceptional negotiating skills and very little direct experience in the area."

Wolf himself admitted a complete lack of experience in the Middle East and later admitted his surprise at the appointment: "I asked Secretary [Colin] Powell, National Security Advisor [Condoleezza] Rice and President [George W.] Bush - why me?" Because they wanted "someone with a fresh view." Wolf agreed on this approach, saying "My lack of experience was an advantage. I learned that in the Middle East, people always tend to look back, and I was asking them to look to the future."

Not surprisingly, like the King-Crane Commission, Wolf's diplomatic foray had negligible impact; a mere fourteen months into his mission, he wandered off to became the president of the Eisenhower Fellowships, a non-profit.

Indeed, the Iraq Study Group Report turned out to be even worse than expected and had minimal influence. As I wrote at the time, it "dredges up past failed U.S. policies in the Middle East and would enshrine them as current policy. Most profoundly, regarding the American role in Iraq, the report moronically splits the difference of troops staying or leaving."

Through a century, American presidents and other leaders celebrate Mark Twain's "innocents abroad" mentality that Gary Johnson has just regurgitated. As someone who's spent his near-50-year career working on this topic, the notion that ignorance makes for better diplomacy is pretty depressing; what have I been doing and for what purpose all this time?

That said, given the abominable state of Middle East studies and the wretched record of Foreign Service Officers like the Arabists, I must admit that avoiding specialists may have some merit. But surely that does not mean turning to ignorami.