A Tiny Silver Lining in the Otherwise Bad Iran Deal 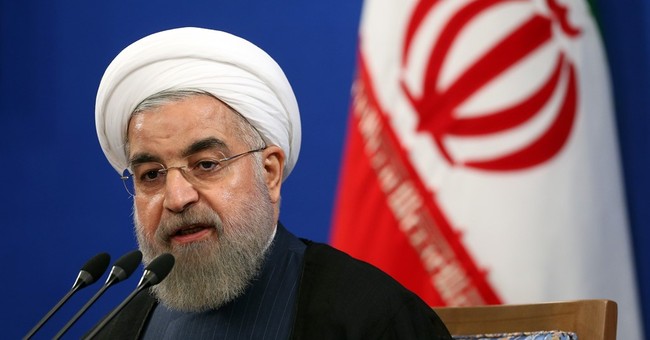 I despise the July 14 Vienna deal because it could do incalculable damage to the United States and its allies. That said, I find a tiny silver lining in the possibility that it could, if everything goes just right, end up hurting the Iranian regime more than its enemies.

The drawbacks of the "Joint Comprehensive Plan of Action" are so numerous that listing them requires more space than the 159-page treaty itself. In very brief, the JCPOA offers the tyrants in Tehran over the next 10-15 years more money, more legitimacy, more arms, and an approved path to nuclear weaponry. As an Israeli analysis sums up the problem, "the agreement unilaterally and unconditionally grants Iran everything it has been seeking without any viable quid pro quo."

To make matters worse, the deal includes no provisions that Tehran stop supporting violent groups, end its aggressive plans to conquer neighbors, eliminate the Jewish state, or deploy an

For its part, the Obama administration shamefully dissembled about the terms of the treaty, used underhanded methods to pass it through congress, and became lawyer and spin doctor for Khamene'i.

For these reasons, I am appalled by the congressional Democrats who sheep-like went with Obama's folly, I join the2/3s of the American public that rejects the Iran deal, and I tremble at what catastrophes the deal might bring.

As for that tiny silver lining: Assuming that the Iranian leadership does not deploy its shiny new nuclear weaponry, the deal could end up undermining it, and for two reasons.

First, greater contact with the outside world and a higher standard of living might erode the regime's stability. The Soviet and other examples suggest that the more the subjects of a totalitarian system know and compare themselves to the outside world, the more dissatisfied they become with the existing ideological and tyrannical order. (There's a reason North Korea's population is kept so isolated.)

Changes have already started in Iran: Expectations are "ballooning" for more prosperity and more freedom, reportsSaeid Jafari, an Iranian journalist. "With Iran's recent nuclear deal with six world powers, many young Iranians are hoping for better days." And it's not just the youth; "Depending on the strata, there is different emphasis on contentious matters such as foreign investment, Iran's relations with the world and the cultural, social and political atmosphere at home." Also, just about everyone demands a stronger currency.

The regime resists making changes, however. It rejects new political parties and arrests merchants who sell clothingwith the American flag; so much for freedom. It maintains a "resistance economy" (meaning a domestic capacity so as to reduce vulnerability to sanctions and not depend on the outside world); so much for consumerism.

President Hassan Rouhani, who is closely associated with the nuclear deal, has tried to head off expectations by warning that the road ahead will be long and painful: "We can import pain killers immediately after the sanctions are removed by spending the unfrozen funds on cheap imports. We can also use our resources for investment in the manufacturing, agriculture, and services sectors. We opt for the latter."

Second, as Stephen Sestanovich of Columbia University argued in a brilliant

Like the Soviet dictators, their Iranian counterparts may also be undermined by Western inconsistencies and changes. This possibility does not reduce my vehement opposition to the Iran deal but it does add meager hope of long-term benefit, a goal that American, Israeli, Gulf Arab, and other strategists should now exploit to the maximum.