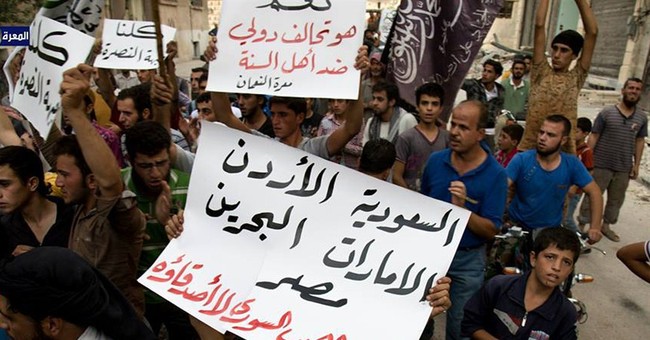 Egypt, famed for millennia as the "breadbasket of the Mediterranean," now faces alarming food shortages. A startlingly candid report in Cairo's Al-Ahram newspaper by Gihan Shahine, entitled "Food for Stability" makes clear the extent of the crisis.

To begin, two anecdotes: Although compelled by her father to marry a cousin who could afford to house and feed her, Samar, 20, reports that they "have only had fried potatoes and aubergines for dinner most of the week." Her sisters, 10 and 13, who left school to take up work, are losing weight and suffer chronic anemia.

Manal, a nurse and single mother of four, cannot feed her children. "In the past we used to stuff cabbage with rice and eat that when we did not have any money. But now even this sometimes can be unaffordable because of rising prices. Our kids were always malnourished but it's getting even worse."

These children are not unusual: according to the UN's World Food Programme (WFP), malnutrition stunts 31 percent of Egyptian children between six months and five years of age, one of the highest rates in the world. WFP also found in 2009 that malnutrition reduced Egypt's GDP by about 2 percent. One in five Egyptians faces food insecurity and "a growing number of people can't afford to purchase enough nutritious food," according to Australia's Future Directions International (FDI). To fill their stomachs, Egypt's poor rely on low-nutrition, calorie-dense foods (such as the infamous all-starch kushari) that cause both nutritional deficiencies and obesity. And 5.2 percent of the population is actually going hungry, an Egyptian state agency, CAPMAS, reports.

Many factors contribute to Egypt's hunger crisis. Going from the deepest to the most superficial, these include:

Flawed government policies: Cairo has consistently favored urban over rural areas, leading to reduced agricultural research, a lack of financial support, private sector monopolies, cock-eyed subsidies, smuggling, corruption, and black markets. Farmers suffer from shortages of expensive yet inferior seeds, fertilizers and pesticides. But most pernicious of all has been the reduction in cultivated land because of the government's complicity in unconstrained and illegal residential sprawl.

Reliance on food imports: Historically self-sufficient, Egypt now – according to FDI – imports 60 percent of its food. The country remains largely self-sufficient in fruit and vegetables but depends heavily on foreign grains, sugar, meat, and edible oils. Egypt imports 2/3 of its wheat (10 million tons of a total of 15 million, making it the world's largest importer of wheat), 70 percent of its beans, and 99 percent of its lentils. Not coincidentally, lentil cultivation has dropped from 85,000 acres to below 1,000 acres. Largesse from friendly oil-exporting states of about US$20 billion in 2013 has been crucial to fund food imports but one must wonder for how long this subsidy will continue.

Poverty: Such dependence on fluctuating international markets is ever more risky as Egypt becomes increasingly destitute. The previous average of 6.2 percent real GDP growth fell to 2.1 percent in 2012-13, WFP reports. Unemployment stands at about 19 percent. The cotton harvest, once the pride of Egypt, saw a production decline of more than 11 percent in a single marketing year, 2012 to 2013. Twenty-eight percent of young people live in poverty and 24 percent live just above the poverty line, CAPMAS reports, an increase of 1 percent in a single year.

Water scarcity: The gift of the Nile is already insufficient by 20 billion cubic meters annually because of such factors as a growing population and inefficient irrigation, reducing Egypt's food production; and with new dams under construction on the Blue Nile in Ethiopia, yet more severe shortages will follow within the decade.

Recent crises: FDI notes "the avian influenza epidemic in 2006, the food, fuel and financial crises of 2007-09, the 2010 global food price spike, and the economic deterioration caused by political instability since the 2011 Revolution."

Can the new government of Abdel-Fattah el-Sisi respond in time to reverse these calamitous trends? I am pessimistic. Millions of volatile Cairenes have far greater political clout than the more numerous fellahin quietly tending their fields. Moreover, urgent issues – from discontented factory workers to a Muslim Brotherhood rebellion to a Hamas-Israel ceasefire – invariably distract the leadership's attention from long-term systemic crises such as food production.

Starvation in Egypt is yet another of the Middle East's many deep, endemic problems, problems which outsiders cannot solve, only protect themselves from.