Daniel DePetris
|
Posted: Jan 23, 2018 12:01 AM
Share   Tweet
The opinions expressed by columnists are their own and do not necessarily represent the views of Townhall.com. 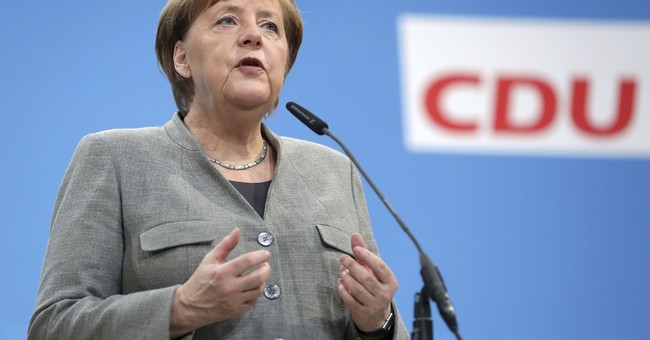 The feeling of relief in the room was palpable as German Chancellor Angela Merkel, Christian Social Union boss Horst Seehofer, and Social Democratic Party Leader Martin Schultz walked up to the stage to announce a breakthrough in their coalition government talks after 24 straight hours of haggling.  For Germans used to quick and smooth transitions of power after parliamentary elections, the announcement from the three leaders was taken as the beginning of the end of four months of political uncertainty.

Some of the most significant public policy issues in German politics today were included in the 28-page draft agreement, from refugee and asylum quotas and tax rates, to government spending on education and carbon dioxide quotas. What wasn’t included in the agreement, though, was a specific discussion on defense spending, Germany’s role in the NATO alliance, or any inkling that the next governing coalition will implement a defense strategy that begins to pair Berlin’s military budget with the two percent of GDP commitment Merkel agreed to during a NATO summit in 2014.

As soon as the coalition agreement is signed and a government is formed, the United States would be wise to hold their German allies to the spending commitments and military reinvestment that its leaders ––including Chancellor Merkel herself ––have pledged to uphold this decade.

Although it is inevitable that German officials won’t appreciate being pressured or lectured to from Washington, the fact is that Berlin has demonstrated by its actions and policies during this century that it remains stuck in some version of a post-Cold War golden age that hasn’t come to pass.

One would have thought that Berlin would have already taken considerable action on its own after news of a depleted Bundeswehr was exposed––substituting painted broomsticks for working machine guns during tank training is not an indicator of a nation taking its national defense seriously. But even these embarrassing stories have not been enough to reorient the debate in Germany or force a consensus across Germany’s establishment political parties of how vital a resilient military during one of most turbulent and challenging periods in European history.

With a $3.4 trillion economy accounting for over 20 percent of the European Union’s GDP, Germany has been the Trump administration’s favorite whipping boy on the larger subject of European military spending. But Berlin is nowhere near the only European power skimping on its own national defense and hoping that Washington’s generosity will be able to postpone a politically unpopular, but much needed, discussion.

One need only look to NATO, the world’s most successful military alliance, to grasp the imbalance between the United States on one side and most everybody else on the other. The numbers have been restated time and again, but they are so important as they can’t be repeated often enough; of the 29 members of NATO, only five currently meet the two percent spending commitment that the alliance itself formulated as far back as 2006.

NATO member states spent a combined $945.9 billion on their militaries last year, a figure that would sound impressive if one ignored that the American taxpayer covered an $683 billion share––72.2 percent of the total. And yes, while the U.S. is a far larger economy with a much stronger military and more expansive foreign policy commitments around the world––many of which, such as collective European security, can be addressed more fairly and effectively through increased burden sharing between allies––the two percent benchmark is a goal every single NATO member state agreed to.  It may be an arbitrary number, but it is nonetheless a commitment the U.S., Canada, Turkey, and European members thought sufficiently important to strive to meet.

To their credit, European countries are moving in a positive direction. After years of stagnant or declining military spending, countries from Germany in the west to Lithuania in the east are starting to dig themselves out of the hole they created. Berlin’s defense budget increased by 8 percent between 2016-2017, and Merkel spent the previous year talking to other Europeans about the necessity of the continent not relying on traditional Washington largess for its security needs.

The U.S. will not abandon Europe anytime soon. There are still far more common security interests between the Americans and Europeans than differences, and endorsing a strong, durable, unshakable transatlantic bond will remain a political winner for politicians on both sides of the Atlantic well into the future. But that bond will eventually corrode as long as wealthy nations like Germany (but not just Germany) neglect their own defense needs and are unwilling to elevate military policy to the same wavelength as protecting the welfare state or defending the ideals of the EU.

A military alliance is only as strong as the states that contribute to it. Burden sharing is therefore not only an act of fiscal fairness to those like the United States which has carried NATO on its shoulders ever since the organization’s establishment in 1949, but a military necessity if the alliance is to deter aggression before it happens or win a war if deterrence fails.