Welcome to the P.T. Barnum Administration 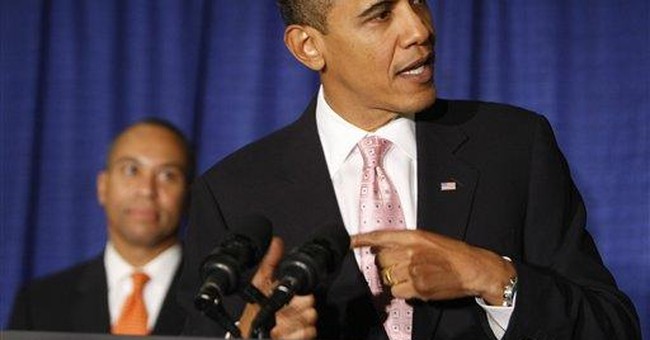 It’s an era of hoaxes and hucksters. Balloons shaped like 1950s UFOs dominate the skies and missing children out their parents for their stupid stunts. TV news shows are filled with made up news stories and made up quotes about Rush Limbaugh. And instead of the three ring circus, the master of ceremonies tried to bring us all five Olympic rings.

There he stands, under the glare of the spotlight, embracing a phrase claimed to be from the greatest showman of all time – P.T. Barnum. The phrase, you wonder? “There's a sucker born every minute.”

Even if Barnum didn’t say it (and historians dispute the point) the parallels remain. President Barack Obama is a master at pulling the wool over our eyes – a real professional huckster.

He ran as an anti-war candidate and still pushes two wars. But he won’t commit to either prosecuting the wars or withdrawing. It’s like having the circus high wire act perform without a net. Sure it might work, but one mistake gets somebody killed. Suckers.

Obama rammed through a $787 billion stimulus plan to keep unemployment from going no higher than 8 percent and it’s now nearly 10 percent. And it’s looking like it will get worse since the Labor Department estimated another 825,000 jobs have been lost but won’t be counted until a spring revision. Suckers.

Now the latest is health care. He and the Hill Democrats are pushing through health care reform bills based on numbers that are virtually meaningless. Even The Washington Post admitted it. The Oct. 19 Post ran a story on the “man who has to decide what it would cost to rebuild the health insurance system” – Congressional Budget Office senior analyst Phil Ellis.

Only Ellis was honest about something few in D.C. ever admit: “We're always putting out these estimates: This is going to cost $1.042 trillion exactly,” he told the Post. “But you sort of want to add, you know, ‘Your mileage may vary.’” In other words, the cost estimates for health care reform aren’t worth the paper they are printed on.

That, of course, isn’t what we are told on TV. NBC’s Chief White House Correspondent Chuck Todd went into great detail about the financial difference among the plans during an Oct. 8 “Today” segment. The piece was entirely upbeat about the last bill getting voted out of committee and Todd called it “a big booster shot of confidence” and “renewed momentum.”

Now we know that to be largely bogus. Government programs rarely cost what they are predicted to cost. Medicare is a classic example. Back in 1965, it was estimated that the “hospital insurance portion of the program, Part A, would cost about $9 billion annually by 1990.v Actual Part A spending in 1990 was $67 billion,” according to a congressional report. That’s more than seven times higher. Suckers.

Yet, our modern day Barnum isn’t honest about that either. He wants his health care bill to pass. Heck, he wants anybody’s health care bill to pass so he doesn’t fail on his major initiative. How to pay the trillion-dollar costs doesn’t matter. He won’t be in office when most of that happens anyhow. The current plan has the health care reform bills kicking in in 2013. So even if Obama wins a second term, he’d already be re-elected and any complaints the crowd has would be meaningless.

About par for the course for a master showman – part actor and part snake oil salesman. And what could be more snake oil than a health care plan that not one person in America can explain because it hasn’t even been written?

Barnum would have been proud. After all, most of the Barnum menagerie is still here. Want some circus freaks? Look no farther that Markos Moulitsas of the Daily Kos and the rest of the lefty blogger and Twitter brigade. Instead of Tom Thumb, Obama’s got Dennis Kucinich, pushing for a public option that would seize one sixth of the U.S. economy. Instead of the bearded lady, it’s White House Communications Director Anita Dunn acting tough and trying to take down Fox News.

Forget the circus clowns because Obama has Joe Biden filling that role admirably, putting alternate feet in his mouth saying they underestimated the depths of the economic problems and then claiming they had saved us from them.

But despite all those outlandish performances, Obama is moving closer to wrecking the American health care system under our very noses. No, there isn’t a sucker born every minute. At that rate, it would take nearly 600,000 years to equal the U.S. population, and we’ve become a nation of suckers much faster than that.