China Soon to Be No. 1 Electric Car Manufacturer

Dan Celia
|
Posted: Nov 21, 2018 12:01 AM
Share   Tweet
The opinions expressed by columnists are their own and do not necessarily represent the views of Townhall.com. 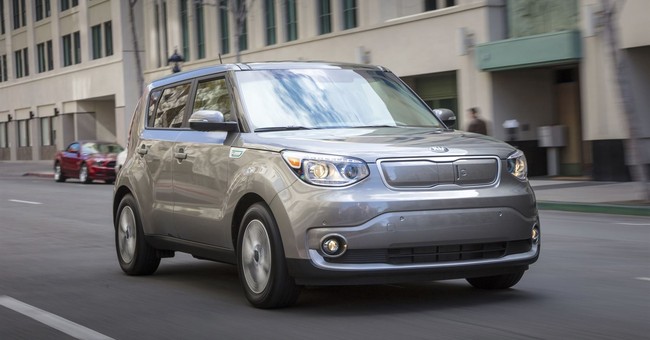 Is China coming to rescue a carbon-filled planet? Here comes the electric car in a big way—at least in China. By 2019, China has set a goal that 10 percent of new vehicles sold in that nation will be electric vehicles. That goal will increase to 20 percent by 2025.

In preparation, the government has placed a strong mandate on manufacturers to produce electric cars. Well, we are certainly likely to see sales of electric vehicles growing in China, a nation desperately trying to wipe its air clean from incredible pollution problems that are creating environmental and working hazards.

One result likely to come from this mandate is a windfall for construction companies specializing in building smokestacks. They will likely have more work than they know what to do with, as all these electric vehicles will dramatically increase megawatt production at power plants needed for all the charging stations.

It is a bit mind-boggling to me how anyone thinks Beijing will suddenly produce all this electricity without leaving a huge carbon footprint and that all the diesel and coal used to run their turbines will magically be replaced with non-carbon fuels. Maybe they are thinking all this electricity will be generated by solar panels and windmills blanketing thousands of acres. Meanwhile, they better hope the sun will always shine and the wind will always blow.

Perhaps I’m being a bit cynical; maybe I’m the one who is a little naïve. But the fact is electric vehicles are a great start to where we need to be. We certainly need to maintain a focus on green energy. After all, we have a stewardship responsibility for the earth that God has given us.

However, while working to convert gasoline-powered vehicles to electric might be a good start, the cap and trade scenario that is part of this picture may be putting the horse before the cart. I expect that we in America will be doing something very similar in the not-too-distant future. The notion of starting a cap and trade situation in China is one thing; remember, China is a communist nation with all the social control and government power needed to implement such a step.

But cap and trade for any country that considers itself a free market economy, such as America, would be a huge mistake. Why do I say that? Because we would then be turning over power and social control of small businesses, as well as large corporations, to the government.

Way back in 2009, I said that this is without a doubt the worst piece of legislation that could ever be considered by a republic such as the United States of America. Fortunately, the idea didn’t generate a lot of support. However, the attitudes are changing. In addition to more government control, the idea of trading carbon credits will mean big money for leading traders—let’s hear it for crony capitalism.

If American legislators follow the Communist regime’s lead, everyone from the smallest of businesses to the largest of corporations will be in a lot of trouble. If you think red tape snarls too many processes in our nation, just wait for cap and trade.

In the meantime, watch the smokestacks in China chugging along and producing even more pollution as they add new, diesel-powered and coal-fired turbines, without America’s EPA standards to restrict their output. The result will leave a far bigger carbon footprint than they ever imagined.

China can feel good about all those electric cars, but I don’t think it will help them breathe any easier in their polluted atmosphere. The same is true for would-be, environmental-activist imitators who would like to see the same thing happen in America. Hopefully, in the long run, as we watch China’s disaster unfold, cooler heads will prevail here.