Dan Celia
|
Posted: Jul 14, 2017 11:30 AM
Share   Tweet
The opinions expressed by columnists are their own and do not necessarily represent the views of Townhall.com. 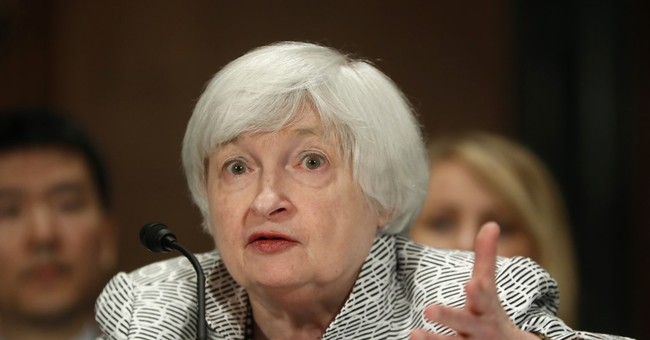 Many economic analysts are talking about an inevitable crash. They have even posed the question: “Does anybody believe that Federal Reserve Chair Janet Yellen can pull off the miracle of draining trillions of dollars from the financial system without causing a major meltdown in the markets—possibly even a recession?”

It confuses me that anyone could have issues with the Federal Reserve slowly moving some of the debt off their balance sheets, especially when these are the same people who complain, whine, moan and write books about doom and gloom because China holds more than $1.2 trillion of our debt.

Yet the largest creditor—the Federal Reserve—holding $4.5 trillion of debt is somehow a good thing. Of course, they are not concerned about Uncle Sam being at the mercy of the Federal Reserve like we might be with China. Obviously, the Federal Reserve would never hold this balance sheet over the heads of legislators in Congress, to which they are supposed to be held accountable.

I have never been, and can’t imagine that I ever will be, much of a fan of the Federal Reserve. Its policies, predictions and projections of where the economy might have been and where it might be going are seldom right.

Furthermore, the Federal Reserve, as well as all the cronies in and around the Federal Reserve chairperson, can’t ever seem to get on the same page. It’s like watching the Republican party on Capitol Hill. But having said all that, I find it hard to believe that anyone would embrace the Fed holding $4.5 trillion worth of U.S. debt.

Our analytics will be more accurate if we stop relying on the punch bowl and stop allowing the Fed’s false positives to influence our outlook any longer than they already have.

We would be better served by addressing the serious problem of America’s debt. Part of this picture is the Treasury Department’s insatiable appetite to continue to print money as they issue debt in order to monetize that which has already been printed. After all, they need to pay the bills somehow as we continue to spend more than we have.

The Federal Reserve’s problem is that Congress has neglected its duty to direct fiscal policies that haven’t come out of Washington for 30 years. Maybe Congress needs to address the size of our government, the size of our debt and understand the urgency of the problem.

Congress should also address the inability and lack of desire of most in Washington, D.C., to reduce the size of government and be accountable for government spending. Why won’t anyone address the possibility that special interest spending alone could be dramatically reduced?

While I believe that President Trump’s pro-growth policies are good, I also believe that that he will likely not have any support from the party he is supposed to represent. We can’t have true, beneficial tax reform when we have thousands of people making millions of dollars from the complexities of the current tax code.

We also know that we can’t expect our legislators to be concerned with the will of the people and what is good for the country. This would mean robbing some very important dollars from the campaign war chests.

As I listen to press conferences from the likes of the so-called leadership—House Speaker Paul Ryan, Senate Majority Leader Mitch McConnell, Senate Minority Leader Chuck Schumer and others—all I hear are campaign speeches playing to their base. Unlike Schumer, Ryan and McConnell are deceiving themselves about the desires of their constituents. These two say what they think needs to be said, while trying to sound as articulate as possible, in the hopes of garnering votes for their reelection.

Acting for the People

These aren’t words, ideas, thoughts and opinions based on convictions of what is best for the American people, the economy and national interest. Politicians can talk all they want about the debt that America has and how it needs to be fixed. But they must also question the necessity of the $4.5 trillion debt held by this private entity group called the Federal Reserve, and that is what needs to be fixed.

In questioning Janet Yellen, our legislators must ask why we should be concerned about being held hostage by China, Japan and other nations—and not feel the same about the Fed. Could it be the legislators know that if they were to firmly cut our spending, thereby cutting the deficit and not having the need for the Fed to continue to carry our debt, they would not be as free to appease lobbyists and special interest groups and prepare for their next election?

It’s ironic that China holding $1.2 trillion of our debt seems to be bad for America and America’s economy, while few are concerned about the Fed holding $4.5 trillion. The Federal Reserve’s U.S debt holding is the cause of 10 years of dysfunction on Capitol Hill, and no end is in sight.