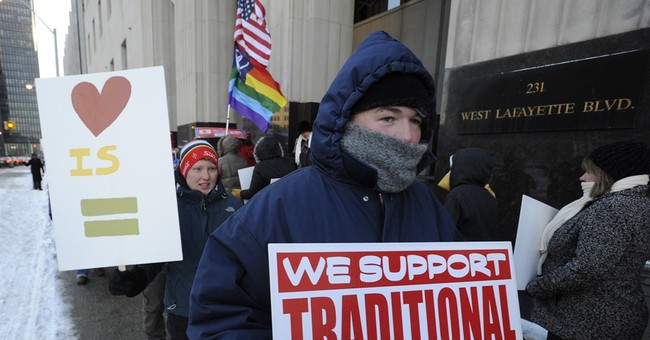 Gays are trying to portray traditional marriage as an alternative lifestyle and those who support it as evil. It’s beyond despicable that Mozilla CEO Brendan Eich, purveyor of Firefox, resigned from his newly appointed post last Thursday because the gay mob found out he had the nerve to . . .wait for it. . . exercise his first amendment right and support traditional marriage. Oh, the heresy. The mob attacked Eich on Twitter for donating $1,000 to support California’s gay marriage ban in 2008.

When the proposal, known as Proposition 8, was placed on the ballot in 2008, more than 52% of Californians voted for it. In fact, the black churches were instrumental in getting blacks, the majority of whom in California are Democrats, to vote yes for Prop 8.

Apparently, in today’s 21st century America free speech is only reserved for gays and not straights or Christians. I won’t tolerate it anymore and I think it’s high time heterosexual, liberty loving Christians mobilize their traditional marriage lobby.

Everybody in America is not gay. About 3.4% of America's population is gay. Nor does everyone support same sex marriage. Depending upon the poll, whom is being polled and where, findings can range from evenly split between those who oppose gay marriage and those who support it to more Americans opposing it.

"Mozilla believes both in equality and freedom of speech. Equality is necessary for meaningful speech. And you need free speech to fight for equality. Figuring out how to stand for both at the same time can be hard."

Freedom of speech doesn’t have to be qualified. It stands on its own and is our constitutional right under the first amendment. If Baker truly believed “you need free speech to fight for equality” in opinions, she wouldn’t have accepted Eich’s resignation. Eich didn’t donate money to the KKK or utter racial slurs. He simply supported traditional marriage.

Think about that for a moment. Traditional marriage or coupling between a man and a woman for the purpose of procreation has been going on since the beginning of time. It’s normal and the mainstream lifestyle. Since when did traditional marriage become a dirty word and one’s support of it becomes a license for “a high-tech lynching” by America’s gay lobby?

During his Senate confirmation hearings for Supreme Court Justice, Clarence Thomas famously told the Senate Judiciary Committee he was a victim of “a high-tech lynching” because he was a black American who dared to be a Republican. In My Grandfather’s Son, Thomas recalls his testimony: “it is a message that unless you kowtow to an old order, this is what will happen to you, you will be lynched, destroyed, caricatured. . .”

If any of the 97% of the rest of America, who isn’t gay, refuses to acquiesce to the gay mafia’s bullying, the message from the gay lobby is “we will destroy you.”

Brendan Eich isn’t the first and won’t be the last example. About two years ago, the president of Chick-fil-A said he supported traditional marriage and the gay lobby went ballistic, demanding boycotts and apologies. Neither happened. In fact, sales of the tasty sandwiches soared and lines wrapped around restaurants across the country.

Leslie Gabel-Brett, Lambda Legal’s director of education and public affairs declared Eich used “his money to try to oppress and harm same-sex couples and their children.” No, he donated $1,000 to preserve traditional marriage. How is this harming same sex couples?

Gabel-Brett takes her irrational argument further. She wrote Eich can “freely donate his money” (thanks for the permission slip to democracy).

“Under our laws, he is entitled to promote such views or actions, and other people are entitled to be outraged by them,” added Gabel-Brett.

But the difference Dear Leslie is that gays don’t believe we Christians and straight people have the same right to be equally outraged by your views and actions. That’s the fundamental problem with today’s radical gay agenda being pushed by organizations like Lambda, it demands others be tolerant of their lifestyle choices but they refuse to TOLERATE ours.

I grew up with two loving gay uncles who just wanted to live their lives. They didn’t push their homosexuality onto the world nor did they try to change the order of nature by fighting for marriage or trying to adopt children. What they wanted was to live openly in society rather than in silence. They died before they could enjoy this freedom gays now have. But if they were alive, they certainly would be shocked and appalled by the gay lobby’s effort to force all Americans into its vice. Live and let live is what they would say.