The U.S. stock markets have given back all their gains year-to-date.  While this situation is not quite so fun for buy-and-hold investors, it presents excellent opportunities for stock portfolio investors who have cash to invest.  The markets may be bottoming now, which would naturally be followed by a sideways trading pattern before any big market rebound.

In January 2012, when F5 Networks was at $120.27, I wrote, "An aggressive growth investor or trader could buy this stock now for a retracement to its highs, representing  a 20% gain if the stock follows through on the upside, and continued long-term growth."

The stock then promptly rose to $139.  It has now corrected with the general stock markets, and looks to be at support levels.  This is a prime time to buy volatile aggressive growth stocks so as to catch the rebound, for traders and long-term holds. 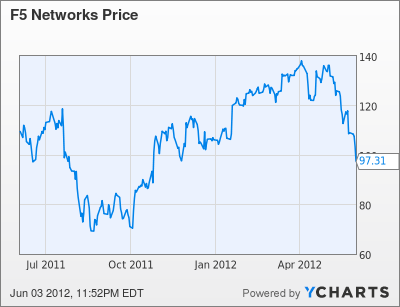 Let's review F5 Networks (FFIV, $97.31) to make sure the fundamentals remain intact and attractive for investors.

F5 Networks “is a provider of application delivery networking (ADN) technology that optimizes the delivery of network-based applications and the security, performance and availability of servers, data storage devices and other network resources," reports Morgan Stanley Research.  For the non-techies in the audience, this is a communications equipment company within the information technology sector.  Competitors include Digi International (DGII), MRV Communications (MRVC), and NETGEAR Inc. (NTGR).

F5 revenues have grown each of the last ten years.  Wall Street projects earnings per share (EPS) to grow another 20%, 20% and 21% in fiscal years 2012 through 2014.  (These projections have increased since I last reported on FFIV in January 2012.) EPS grew every year in the last ten years except 2008, when they were flat.

There is an active share repurchase plan in place, with another $330 million authorized.  ”We view the company’s balance sheet as strong, with roughly $1.1 billion in cash, cash equivalents and short-term and long-term investments ($13 per share) and minimal long-term debt (long-term debt to capital ratio of 5%, mostly consisting of deferred revenue) as of December 2011,” reports S&P.

The F5 2012 price earnings ratio (PE) is currently 21.5, which is high for a value stock, but reasonable for an aggressive growth stock.  The eight-year PE range has been between 16 and 77.

Morgan Stanley Research has an "overweight" rating on FFIV stock.  S&P has a 12-month price target of $140 and a Qualitative Risk Assement of “High”.  ”Our risk assessment reflects the highly competitive nature of the industry, and our view of FFIV’s weak corporate governance policies, including the lack of cumulative shareholder voting rights in director elections and stock-based incentive plans that have been adopted without shareholder approval.”

This stock barely suffered during the 2008 Financial Meltdown, then took off like a rocket, rising from $40 in October 2009 to $145 in January 2011.  The stock had an overdue price correction in 2011, falling as low as $69 during the late summer market drop, then rose to $139 when the S&P 500 index peaked again in April 2012.  An aggressive growth investor or trader could buy this stock now in anticipation of a retracement to its recent highs, representing  a 40% gain if the stock follows through on the upside.

However, there is no hurry to buy FFIV stock.  Market indices need to stabilize before they rebound, and so do individual stocks.  Patient investors and traders should simply identify the stocks they'd like to own during the next market run-up, watch for the markets to stabilize in sideways trading patterns, then begin accumulating stocks like F5 Networks with great fundamentals.