What Christmas Meant to the Presidents and How They Communicated it

Craig Shirley
|
Posted: Dec 24, 2019 12:01 AM
Share   Tweet
The opinions expressed by columnists are their own and do not necessarily represent the views of Townhall.com. 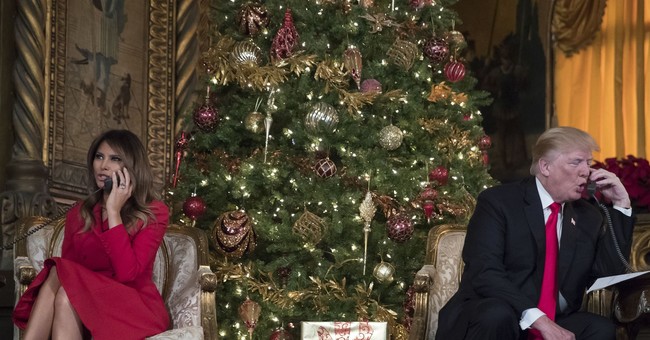 Christmas often seemed to be a bleak affair for George Washington. The misery started when the future president spent his eighth birthday in a dependency with his family after their Fredericksburg home burnt down on Christmas Eve. The unpleasantness would haunt the man for much of his life. Many of his formative Christmases were spent in frontier lands, freezing and soldiering in the wilderness. The first Christmas he spent as husband to Martha Washington was marred by her contraction of measles that lasted for weeks. While he led his army to the famous victory at the battle of Trenton, he spent Christmas night crossing the Delaware on a freezing cold night.

A year later he would, again, spend a frozen winter huddled with his men, this time at Valley Forge, training for the battles to come. Christmas of 1781 should have been a raucous occasion, following the defeat of British General Cornwallis at the Siege of Yorktown, yet the battle cost him the life of Martha’s son Jacky, who contracted a fever during the long struggle. Christmases as president, well before the White House construction, were quiet occasions at his residence in New York and presidential residence in Philadelphia. His death came only 11 days before Christmas in 1799. Despite the gloom of the holiday season that haunted out first president, Christmas would slowly evolve into a joyous occasion for the leaders that followed.

The first official Christmas Party was an intimate gathering held in 1800 by John and Abigail Adams for their granddaughter. President Andrew Jackson was the first to make a real bacchanalia out of the holiday with an elaborate party in the White House for family and cabinet members. Befitting the pugilistic Jackson, this party ended with an indoor snowball fight with cotton substituted for snow. Our 9th president Benjamin Harrison was the first president to place a Christmas tree in the White House in 1899. While other trees would follow, the tradition almost ended with Theodore Roosevelt. The conservationist and hunter disapproved of deforestry for decoration. Yet his sly son, Archie, kept the fledgling tradition alive by hiding a tree in a closet.

Only in the 20th Century did Christmas trappings become a tradition. The first official White House Christmas tree, viewable by the public, came during the years of President Taft in which a large tree was erected in the White House Blue Room. Calvin Coolidge made the first official “National Christmas Tree” a public spectacle. It would be first publicly televised in 1946 and, in 1954, the holiday season became a monthlong “Pageant of Peace” that commemorated the ends of World War II and the Korean War. In the years that followed, each president and first lady would keep Christmas in his or her own way. As for how restful Christmas was for each president, that’s harder to say.

The Reagans each year delayed their Christmases at the California ranch, so their Secret Service detail could spend the holiday with their families.

No president faced tougher adversity through the holiday season than George Washington. The brutal days of World War II certainly took their toll on FDR. Yet, one could argue, during the tumultuous decades of the Cold War, Christmas held a special meaning for America.

Each president found a way to make the truest wishes for the free world manifest during the Christmas season. Presidents like John Kennedy and Jimmy Carter took the occasion to wish for world peace and understanding. However, presidents like Reagan and FDR made their holiday addresses a call for more that just peace to flourish. Reagan made, in no uncertain terms, clear that his wish was not for the establishment of peace, but for the propagation of freedom. Reagan and Roosevelt called out, by named, the aggressors that threatened this peace and advocated for a world in which man and woman were free to hold Christmas in their hearts at the discretion of their souls, not the state.

It is during the Cold war that Christmas in D.C. became a global concern. As the leader of the free world, the words spoken during this winter holiday were meant to articulate the will and wishes of the entire free world. A rare moment to explain, not what we do, but why we do it.

Wise presidents know they’re speaking to posterity as much as they are the people.