The Snow Job in Poland

Craig Rucker
|
Posted: Dec 08, 2018 12:01 AM
Share   Tweet
The opinions expressed by columnists are their own and do not necessarily represent the views of Townhall.com. 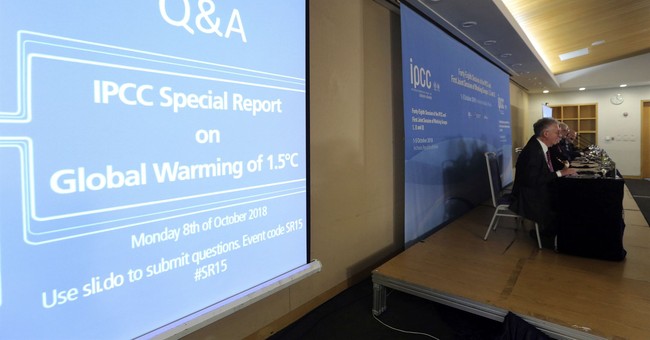 Any blizzards that blanket Poland this winter can’t compare to the massive snow job climate campaigners are trying to pull off.

* Proclaim that humanity and the planet face existential cataclysms, unless fossil fuel use and carbon dioxide (CO2) emissions are slashed to zero by 2050 – to “prevent” average planetary temperatures from rising more than 1.5 degrees Celsius (2.7 F) above what they were in 1820, when the Little Ice Age ended and the modern industrial era began.

* Finalize 300 pages of “guidelines,” to implement the Paris climate agreement – by driving the switch from coal, oil and natural gas to wind, solar and biofuel energy.

* Reach a binding agreement that wealthy countries (excluding China and other newly rich nations) must transfer at least $100 billion annually to poor countries.

Earth’s climate is always changing somewhere, due to powerful natural forces over which humans have no control. To say we can now perpetuate current conditions by controlling emissions of plant-fertilizing carbon dioxide is sheer fantasy.

Average global temperatures have already (thankfully) risen nearly a degree since 1820. To suggest that another half degree would be catastrophic is absurd. Indeed, average temperatures were higher during the Medieval Warm Period – and except during recent El Niño events have barely risen since 1998, even as CO2 levels climbed significantly, spurring plant growth worldwide.

Constant references to the “hottest ever” day or month involve hundredths of a degree, less than the margin of measurement error, often by activist scientists who have a history of doctoring data. They also ignore record cold snaps, like this Thanksgiving weekend in the U.S. Northeast.

Human activities certainly affect climate and weather to some degree, at least locally. But there is no real-world evidence that they have major (much less cataclysmic) impacts. Computer models say otherwise, but their record for accuracy is abysmal to zero.

Regarding guidelines to implement Paris, they would put the United Nations and IPCC in charge of our energy use, economies, lives and living standards – which would be disastrous. Fossil fuels still provide 80% of all U.S. and global energy; wind and solar provide less than 5% and only intermittently.

Forcing us to convert to wind and solar would increase electricity prices ten times over – and blanket areas many times the size of California with turbines, panels, batteries, and huge mines to dig out the raw materials needed for these “eco-friendly, climate-safe, sustainable” replacements.

Developing countries say they were promised $100 billion a year, for starters, plus free energy technology transfers. That’s the primary reason they signed the Paris climate treaty.

They’re angry that barely $3.5 billion has been put on the table, and rich countries say they cannot afford to pay more, especially if they’re also supposed to slash their fossil fuel use and thus economic prosperity.

The biggest snow job is any claimed devotion to transparency. Secrecy and deception are fundamental to the IPCC process. Anyone who questions the “fossil fuels cause climate chaos” thesis is silenced. So is anyone who suggests that data and evidence should determine policy – instead of computer models.

Katowice organizers are furious that a Trump administration exhibit will highlight the remarkable benefits of fossil fuels. They vilify scientists who emphasize the sun’s vital role in climate change, or point out the many ways that temperature, storm, drought and other climate data are cherrypicked, “homogenized,” manipulated or even fabricated to drive alarmist narratives. They ignore the Medieval Warm Period, Little Ice Age and 1970-1976 global cooling scare.

The real IPCC and Paris treaty agenda is simple. Blame humans and fossil fuels for virtually all climate and weather events. Control energy use, economic growth and living standards – lowering them in industrialized countries and limiting them in developing nations. Redistribute the world’s wealth and resources. And replace the capitalist economic model with a global green socialist system, controlled by the UN, IPCC and green activists.

Lack of energy, jobs, safe water and decent living standards is a far more pressing issue for poor countries than climate change. No wonder Asia alone already has some 2,000 gigawatts of coal-fired power plants operating or under construction. That’s nearly twice as much as total US summertime generating capacity.

Meanwhile, every Irish household faces new carbon taxes of $3,000 to $5,000 a year (!) unless their government imposes equally costly measures to reduce “greenhouse gas” emissions and avoid paying punitive EU fines. To gauge likely Irish reaction to that, look to France – where tens of thousands have been rioting over President Macron’s plans to implement higher carbon taxes.

Climate insanity needs to be reined in. CFACT’s delegation to Katowice is working hard to get that process underway.