Conrad Black
|
Posted: May 13, 2018 12:01 AM
Share   Tweet
The opinions expressed by columnists are their own and do not necessarily represent the views of Townhall.com. 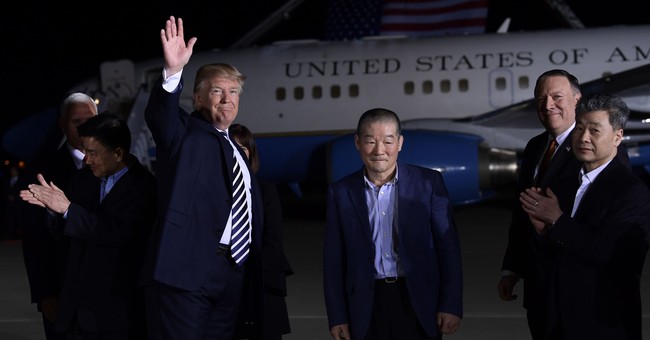 The following is an excerpt from Lord Conrad Black's latest presidential biography, Donald J. Trump: A President Like No Other (Regnery Publishing) -- Releases May 14, 2018!

Those who oppose Trump generally do not understand how desperate and disgusted almost half of Americans are at the most inept twenty-year streak of presidential misgovernment in American history that preceded the 2016 election. These decades of fruitless war, bone-cracking recession, humanitarian disasters, collapsing alliances, oceanic deficits, and the erosion of economic growth and private sector industrial investment to a third or a quarter of levels under Ronald Reagan, could rattle any American’s patriotic self-confidence. Trump is a throwback to Reagan in that he rejects the chic defeatism of the establishment; and despite all the media and Democratic Party and Never-Trump calumny of him, his political program is essentially conventional, moderate, conservative wisdom lifted in large part from the policy recommendations of thoroughly respectable conservative think tanks such as the Heritage Foundation. Trump speaks to Americans fearful of decline. He wants, as his slogan says, to make America great again.

To those unaffected by the decline of America, that decline was invisible; to those who were affected by it, it is a challenge and a constant fear for their own welfare and national pride. The Democrats have had no policy for some years except to denigrate their opponents, and try to bribe and anesthetize a comatose lumpenproletariat addicted to state benefit. Their nomination of Hillary Clinton showed that they did not realize how many Americans rejected this vision of America.

The great majority of anti-Trump activity in the first year of his administration was devoted to the propagation of falsehoods, which were then justified by the selective and intentional misinterpretation of Trump’s careless and ambiguous statements. Distaste for Trump’s straight-shooting and sometimes vulgar style caused otherwise intelligent people to withhold any benefit of the doubt, and pathologically to interpret anything he said or did in the worst possible light. He is not, in fact, a racist, sexist, warmonger, hothead, promoter of violence, or a foreign or domestic economic warrior. No opposition can continue on this name-calling basis alone for much longer than this one has.

Every two weeks in the first year of his term a new alarm was raised, and all quickly fell silent. In a calmer atmosphere, the faddish frenzies will become rarer and shorter. For two weeks in August, Confederate statues were being taken down all over the South, but now such iconoclasm happens only intermittently; the abrupt termination of famous careers for alleged sexual liberties that once happened on a daily basis has become much less frequent. Trump’s opponents are tenacious but unimaginative and they have yet to seem to prepare for the possibility, now more of a likelihood, that he might be a durable and effective president.

The Democrats committed all their energy to proving their assumed self-evident proposition that Trump could not win, then that his victory could be undone, and then that it could be vitiated by scorched-earth obstruction, or destroyed completely by investigations and indictments. Now that Trump has reduced most peoples’ tax burden; relieved the fear that recession and unemployment are just around the corner (in fact provided a booming economy); and adopted a foreign policy of prudent and effective realism that has smashed and scattered ISIS, persuaded China to cooperate against North Korea’s nuclear program, and defended American interests; Americans will likely and rightly judge him a success, despite his lapses of suavity. He has been chronically underestimated, as a nonstarter for the Republican nomination until he clinched it; unelectable until he was elected; and likely to be impeached until the investigations faded and his accusers were engulfed in suspicion.

Trump is unpredictable and somewhat erratic, and his stridency and ill-tempered outbursts are not what Americans expect of their presidents. But there is nothing unconstitutional, or even irrational about his use of social media and his aggressive tendency to counterattack (sometimes preemptively). This has been his only available method of surmounting dishonestly partisan and hostile media. The presidency is what its occupants make of it. No president smiled much or took to the airwaves or used airplanes or held frequent news conferences before Franklin D. Roosevelt. Some of Trump’s techniques may be emulated by successors. If his policies succeed, so will he. And much more of his histrionics are just tactical then his hard-core critics imagine.

Donald Trump is not a blundering reactionary, but a battle-hardened veteran of very difficult businesses full of unethical people (and he is no eagle scout himself). He is a very tough and an almost demiurgically energetic man. His personality is so startling and at times garish that there is a large section of the population that will not warm to him. But if his persistence brings continued success, he will accede to the support of the majority.

It was always the case that, in making billions of dollars, surmounting an acute financial crisis, being a great television star instantly and for fifteen years, revolutionizing the nature and potential for celebrity and seizing control of a great political party in his first real try at politics, Donald Trump accomplished more before he was president than had any prior president of the United States except Washington, Jefferson, Madison, Grant, and Eisenhower. His exterior is uneven, but his history is one of astounding accomplishment.