Impressions From the Scene of Amtrak 188 Derailment 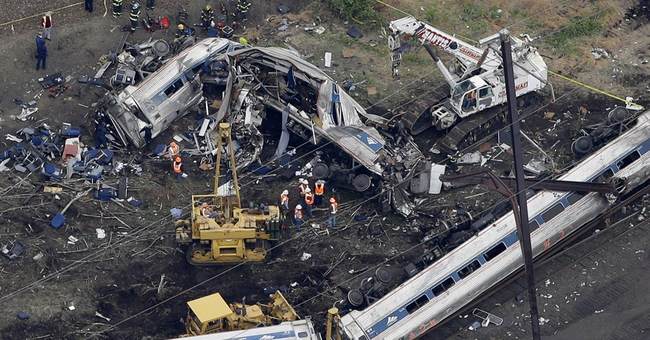 The last week has been unimaginably difficult for many Americans who lost friends or family members in the tragic derailment of Northeast Regional Amtrak train 188, which crashed on a curved track just north of downtown Philadelphia on Tuesday evening. Eight lives were lost, eight more individuals remain in critical condition and more than 200 were injured.

The day after the derailment, I visited the scene to speak with Amtrak President Joe Boardman, Federal Railroad Administration (FRA) Acting Administrator Sarah Feinberg, National Transportation Safety Board (NTSB) Vice Chairman Bella Dinh-Zarr and Board Member Robert Sumwalt, and Philadelphia Mayor Michael Nutter. As Chairman of the Railroads, Pipelines and Hazardous Materials Subcommittee, I was anxious to understand from them what happened and what we could do together to ensure that this never happen again.

Millions of Americans rely on passenger rail every year to travel safely to and from their jobs, families and vacations. Having worked closely in partnership with Amtrak on legislation to reform and improve the service during my time in Congress, I can say wholeheartedly that they take great care to ensure the well-being of their customers. Yet this tragedy has caused all of us to examine various potential causes and try to establish solutions. Some have pointed to a lack of Amtrak funding – a gross oversimplification of the many factors at play here.

What we now know is that the train was traveling at 106 miles per hour, more than twice the posted 50 mph speed limit, when it reached that curve. The conductor, Brandon Bostian, a 32-year-old New Yorker, began his round trip from New York to D.C. and was on his regularly scheduled return leg, one that he had taken many times in his five years conducting Amtrak trains. Though the train left D.C. five minutes late, it arrived in Philadelphia one minute early and left Philadelphia on time.

Investigators have yet to determine why the train was traveling at more than double the speed limit. Amtrak and FRA officials explained to me during my visit that some drivers accelerate to make up for lost time while running late; as the train left on time, this should not have been the case in this crash, which occurred eight miles away from the Philadelphia train station. They also indicated that preliminary examination of the car showed that the driver had attempted to use the brakes moments before the crash, which only resulted in a 3 mph reduction in speed. Many questions remain about the speed of the train.

Many in Washington and across the country this week have asked about technology called Positive Train Control (or PTC), which regulates speed and prevents train crashes through a special alert system. Amtrak has been working all year to make a December 31, 2015 deadline to install a type of PTC called Automatic Train Control (or ATC) throughout the Northeast Corridor. Amtrak has been given the resources to install their PTC technology, and yet has chosen to spend resources elsewhere.

What is clear as we work to fully understand the cause and implications of this awful crash is that we must work together to ensure safety for all traveling via passenger rail. That’s part of why I worked earlier this year to pass the Passenger Rail Reform and Investment Act, or PRRIA, through the House. The bill improves rail infrastructure, reduces costs, leverages private sector resources, creates greater accountability and transparency, and accelerates project delivery for Amtrak and the Nation’s passenger rail transportation system. PRRIA established a $1.4 billion per year funding level that gives Amtrak the means to improve their service both in quality and in safety. Today we are still waiting for the Senate to take up this crucial legislation, and in the next few weeks, we will be convening a hearing to further examine the cause of this accident. I remain committed to doing everything we can to prevent future tragedies like this one, and I commend the first responders and safety agencies involved for their efforts to do the same.