Congressman Bill Zeliff
|
Posted: Jun 04, 2019 1:08 PM
Share   Tweet
The opinions expressed by columnists are their own and do not necessarily represent the views of Townhall.com. 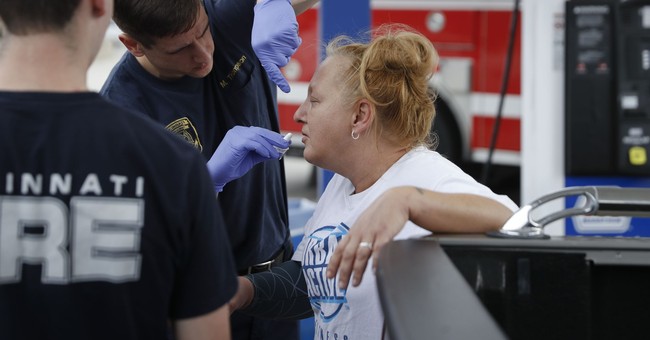 Throughout my adult life this nation has struggled with a drug addiction problem that has floated in and out of epidemic proportions.

Think of it, for nearly 60 years illicit drugs of all types have ruined lives and torn apart families. Perpetuating this scar on our society is money, lots of money. Tens of billions of dollars of profits mean the Mexican cartels will go to any length to deliver product.

These irresistible economic incentives have created a real national security crisis at the southern border. The river of illegal fentanyl that caused 28,000 overdose deaths in 2017 is also responsible for countless killings and the servitude of Mexican citizens and Latin American immigrants finding their way through Mexico.

This is very much an international issue. Illicit fentanyl, a leading driver of opioid deaths in America, is not produced inside the continental United States, but in make shift Mexican labs that synthesize raw product from China. Every dose of these illegal synthetic opioids are somehow crossing our borders to get into this country. Put simply, the Mexican cartels are waging a war upon the American public that has killed more of our brothers and sisters than the number of Americans killed in the entire Vietnam war.

How is this not a national emergency? Our economy is in its longest expansion and needs qualified labor yet employers are struggling to find applicants who can pass a simple drug test. Almost all forms of crime and the corresponding staggering costs stem from the illicit drug trade. Our overcrowded prisons are loaded with individuals serving time for drug related convictions and the children of addicts have had their childhood ripped from them.

Despite a consensus that action needs to be taken, the subsequent debate has left us paralyzed to implement a comprehensive solution. The good news is treatment-based solutions and court settlements have helped to improve the situation on the ground and curtailed American citizens’ demand for illegal synthetic opioids. This year the Department of Health & Human Services (HHS) allocated $487 million in grant funding to allow states to increase patient access to care and treatment for opioid use disorder as part of the State Opioid Response (SOR) grant program. Now we must also find a solution on the supply side by stopping these drugs from coming into the country.

The president has called for a border wall from the Pacific to the Gulf, Democrats have pitched a technological wall with drones and high-tech surveillance, and both parties have called for more personnel at our border checkpoints. The answer to the problem is (D): All of the above.

Opponents of the wall argue that illegal drugs mostly enter through the checkpoints and a physical barrier along the southern frontier will not be effective in stopping the flow of drugs. While most of the illegal drugs seized at the southern border happen to be confiscated at checkpoints, that is most likely because this is where most of our enforcement resources are concentrated. It is hard to believe that as additional resources are devoted towards drug interdiction at checkpoints that Mexican cartels won’t shift their smuggling opportunities to the first logical opening in the wall (if they have not done so already). While illegal fentanyl seizures doubled last year, U.S. Customs and Border Protection officials admit more is getting through. The fact of the matter is these criminals will not walk away from 30 billion dollars that easily.

Overcoming this horrible scourge will take an effort of monumental proportions similar to previous war efforts or putting a man on the moon. But because the attack is here on our own soil, it is well worth the effort. Some of the states worst affected by the opioid crisis (West Virginia, Ohio, and New Hampshire) are nowhere near the chaos on the southern border, but the shared discord a lack of border security has sown across the country show that we all have a common interest in victory.

Regardless of your political affiliation, winning this war should be a top priority. Securing the Southern border will diminish crime across the country and help bring this alarming public health crisis to an end. Deaths from syntheticopioids significantly increased in 23 states and the District of Columbia from 2016 to 2017 sparing no region from the blight of the opioid crisis.

As a former Congressman from one of the states most affected by the opioid crisis who chaired a subcommittee focused on drug policy and programs during my tenure in the House of Representatives, I have seen firsthand the havoc that drugs can wreak on our communities. It is past time for Congress to join together and support an all of the above strategy for securing the southern border and ending the opioid crisis.