Pittsburgh’s Road Out of the Coronavirus Downturn

Colin McNickle
|
Posted: May 02, 2020 12:01 AM
Share   Tweet
The opinions expressed by columnists are their own and do not necessarily represent the views of Townhall.com. 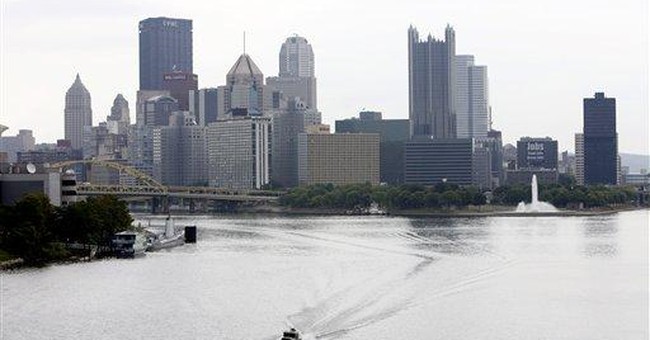 Wrestling with a serious coronavirus-induced revenue shortfall, the City of Pittsburgh must cut spending and cannot afford to raise taxes, conclude researchers at the Allegheny Institute for Public Policy.

“Now would be a perfect time to look at money-saving proposals -- such as privatization and outsourcing -- to reduce city expenditures and gradually reduce the workforce,” say Jake Haulk, president-emeritus of the Pittsburgh think tank, and Eric Montarti, its research director.

“That is a necessary step in lowering the future growth of pension liabilities,” the scholars add (in Policy Brief Vol. 20, No. 14).  “Getting in line with much better managed cities is paramount for Pittsburgh’s future.”

Pittsburgh has a troubling history of overly expensive government. As the Allegheny Institute noted in its most recent Benchmark City report, Pittsburgh spent 51 percent more on a per-capita basis than its peer cities. Additionally, a 2016 study ranked Pittsburgh near the bottom of 160 cities in financial management affairs.

“If the taxes and spending levels were not so high in comparison to better financially managed cities, the revenue shortfalls would not be so dramatic and the need to find supplemental revenue dollars or to make spending cuts would be far less, even if in percentage terms they are the same for the benchmark cities,” say Haulk and Montarti.

In preliminary calculations, Pittsburgh Mayor Bill Peduto estimated a 2020 revenue shortfall of $127 million and a total of $239 million through 2024. The mayor has requested federal funding for local governments, including Pittsburgh, which did not meet the 500,000 Census threshold for initial aid.

For the 11 weeks from March 15 to May 31, the presumed period of the harshest business restrictions, the Allegheny Institute places the revenue shortfall—estimated revenue absent the closings minus estimated collections—at $68 million.

“Note that no layoffs or furloughs had been announced as of April 27,” the think tank scholars remind. “So, spending has been proceeding at the rate laid out in the budget.”

Additionally, the city had $85 million in its fund balance at the beginning of 2020.  If any of that has been tapped remains a question mark.

“To get to the city’s (projected) $127 million shortfall for the year, there would be loss of over 25 percent of combined taxes (besides real estate) and other sources of income for the year,” Haulk and Montarti say.

“In short, the city’s estimated losses must be based on a very gloomy outlook for the remainder of 2020. And with another $100 million forecast through 2024, not much in the way of rebound for the next couple of years is foreseen,” the researchers note.

Indeed, asking for $127 million in federal and/or state government aid before layoffs, spending cuts or use of reserves is likely to be a non-starter.

Just as critical is the necessity of foreswearing any tax increases.

As the think tank noted in 2009, as the economic recession began to be felt in the region, “the one thing [local governments] should not do is to make the local problems worse by raising taxes to fill budget gaps.”

Unfortunately, the city already had raised two taxes for 2020, prior to the pandemic striking -- on deed transfers and a voter-approved increase in the property tax to fund parks.

“The need for revenue grows because of spending increases and the City of Pittsburgh shows no inclination to reduce it,” Haulk and Montarti say.

“The most important thing is to get the national, state and city economies up and running,” the researchers stress. “Otherwise, the financial holes just get deeper.”