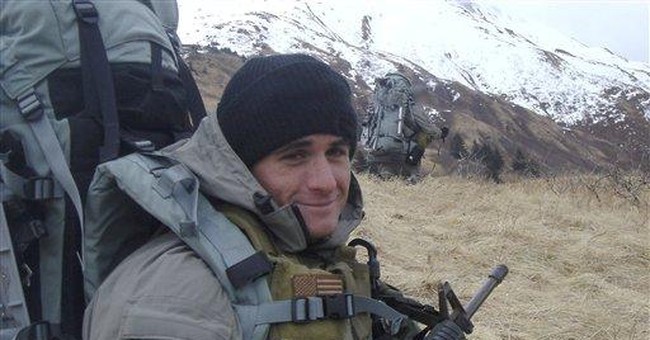 What can Navy brass be thinking? On Dec. 7, Pearl Harbor Day, a Navy SEAL - one of an elite band of highly skilled and extraordinarily brave American warriors - faced arraignment. The charge: He punched a terrorist.

To be precise, he punched a terrorist suspect - Ahmed Hashim Abed, the alleged ringleader behind the killing, burning and mutilating of four American contractors in Fallujah, Iraq, in March 2004. Abed's followers then strung up two of the corpses on a bridge over the Euphrates River.

Abed was run down by the SEALs in September 2009. Exactly, what happened after that is a bit hazy. He spent time in U.S. custody, then in Iraqi custody, and eventually was returned to U.S. custody. At some point, he claimed one of the Americans who apprehended him punched in the stomach, or maybe the mouth. Three SEALs are now in trouble. Petty Officer 2nd Class Matthew McCabe stands accused of "assault, dereliction of performance of duty for willfully failing to safeguard a detainee, and making a false official statement." Petty Officers Julio Heurtas and Jonathan Keefe are being charged with "impeding the investigation and dereliction of duty in failing to safeguard a detainee."

The three refused the offer of a "captain's mast," which is a non-judicial, disciplinary hearing, because that would leave it to a commanding officer to determine what happened. They are saying they did not harm Abed and they want to be fully cleared of all charges. They want to continue their careers with no blemish, no asterisk, no record of the case in their files. They're willing to risk prison to achieve that.

The court-martial is scheduled to begin in January. It is not clear whether Abed will be flown in from Iraq, where he is being detained, to Virginia to face them in the courtroom.

Surely, these SEALs - like all American citizens -- deserve the presumption of innocence. It's also worth recalling that the al-Qaeda manual recommends that all detainees complain of torture and abuse.

But what if it turns out that one of the SEALs did give the guy shot? What if Abed was uncooperative, or spit at them, or bragged about how he slaughtered the Americans (one of whom was a retired SEAL) and how they begged for their lives and squealed like pigs as they died? I can imagine how a normal guy - even one as disciplined as a SEAL -- might lose his temper for a moment.

In that case, I wouldn't expect a senior officer to turn a blind eye. I'd expect him to take the SEALs aside and say, "Let me be clear: You guys cut the John Wayne stuff or you're going to be peeling potatoes on an aircraft carrier in the Persian Gulf for the next six months. Understood?" The reply would be: "Yes, sir! Understood, sir!" And that would be the end of that.

But a court martial? Maybe there's more to it than we know. But how much more could there be? Abed is alive. He has two eyes, two ears, ten fingers and ten toes. This much is clear: If a single alleged knuckle sandwich is all it takes to remove three Special Operators from the battlefield, Abed won this battle.

In his remarks accepting the Nobel Peace Prize, President Obama said, "And even as we confront a vicious adversary that abides by no rules, I believe the United States of America must remain a standard bearer in the conduct of war. That is what makes us different from those whom we fight. That is a source of our strength."

I agree. Our troops should uphold the highest standards. Notwithstanding such rare but extravagantly publicized lapses as Abu Ghraib, they do exhibit a degree of self-restraint that no other military, now or in the past, can match.

But this, too, needs to be recognized: The notion that international law provides strict legal protections for terrorists is a new and dubious innovation, cooked up by trans-national lawyers seeking power for themselves and their organizations, along with unprecedented limitations on American power and sovereignty.

As Obama rightly noted: Terrorists abide by no rules. Therefore, they are not entitled to the protection of the rules. If we treat them humanely - as we do and as we should -- that is our choice based on our values, our standards, our humanity. It is not based on their rights. Rules that tie the hands of only one side in a conflict are neither moral nor useful.

A terrorist in American custody should be aware that he is in the presence of principled professionals. But he should not believe that he is untouchable or that he is entitled to the rights enjoyed by an American citizen under the U.S. Constitution - a document he'd gladly trample underfoot.

He should know that the troops who detain him are not like him: They won't chop off his head on video tape while chanting praise for a divinity pleased by the carnage. But he also should know that if he asks for a fat lip, he might just get a fat lip.