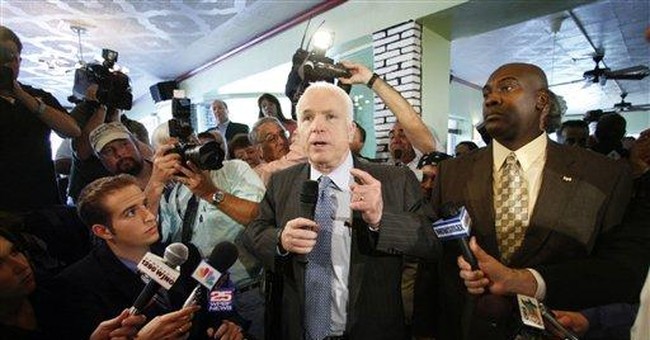 Like the chilly weather that blew through New York City this week after a mild winter, the New York Times' recent cooling toward John McCain marks a profound switch from the paper's years of warm and fuzzy coverage of the moderate "maverick."

The paper's temperature shift occurred soon after the Wisconsin primary, when McCain openly suggested he would be the GOP nominee and began to set his sights on his likely opponent Barack Obama. The scandal winds are blowing down predictable avenues of attack -- streets conveniently bypassed when McCain was an underdog maverick facing more conservative candidates in the GOP primary process.

Things really got cold with the now-infamous February 21 front-page story that used two anonymous sources to make blurry allegations against McCain -- not of an affair, but of the appearance that there might have been one -- with telecom lobbyist Vicki Iseman. To give the unsubstantiated sex story some false weight, the Times intimated routine dealings with telecom lobbyists were somehow more sinister (without including exculpatory evidence provided by the McCain campaign).

The story included the first mention of the Keating Five by a Times reporter since April 3, 2003. Coincidence?

For a lengthy piece with an extended incubation (Drudge reported rumors of it back in December), what the Times finally delivered was surprisingly shallow, and was immediately left for dead. Executive Editor Bill Keller would not put forward anyone to defend the story and the "bombshell" backfired, accomplishing for McCain something no number of conciliatory CPAC speeches could have done -- the uniting of conservatives behind him.

Undaunted, the February 24 edition voiced concern about McCain's advanced age. Reporter Michael Cooper didn't beat around the bush: "The quest to win the presidency at an age when he would be too old to be a commercial airline pilot or even a judge in some states has already led Mr. McCain to adopt a more grueling campaign schedule, and a more vigorous style, than several of his younger rivals….But he does have white hair, scars from a bout with melanoma and limited flexibility from the injuries he sustained as a prisoner of war in Vietnam. And the fact remains that by the end of a second McCain term, he would be in his 80s."

Of course, McCain had all that when the Times was heralding him with headlines like these:

Next came perhaps the oddest story, a February 28 piece on a trumped-up controversy over whether McCain's birthplace -- the Panama Canal Zone, where his Navy officer father was stationed in 1936 -- disqualified him from higher office. Article II of the Constitution declares that only a "natural-born citizen" can serve as president.

What the Times didn't mention: The abstract question was investigated and dismissed by the Washington Post all the way back in 1998, making it a story even older and less relevant than its "bombshell" on Vicki Iseman.

McCain may be belatedly learning a hard lesson. Being the media's favorite Republican won't get you very far when you're the only person standing between what the Times insists are two "historic candidates" -- the first black or first woman president.

Perhaps figuring that the best offense is a good defense, the Times ran a February 29 front-page story warning Barack Obama about shadowy Republican operatives lurking behind the mild-mannered moderate McCain -- without mentioning that it has been the Hillary Clinton campaign that has been playing the race and drug-use cards against Obama.

"Some of this will almost certainly take the shape of the Internet rumors and whispering campaigns that have popped up against Mr. Obama since he got into the race, like the false reports that he is Muslim. Others will no doubt come from the types of shadowy independent committees that have played a big role in campaigns in recent years."

With all this, is it any surprise that a February 27 Rasmussen poll found just 24% of American voters have a favorable opinion of the Times, compared to 44% unfavorable?

The Media Research Center delivered 60,000 petitions to the Times calling for an end to the paper's slanted coverage of the 2008 election and its unsubstantiated and partisan attacks on John McCain. Then, MRC Action (mrcaction.org) organized a fax and certified letter campaign calling for the resignation of Executive Editor Bill Keller. Bad enough, it will be worse news when the Times Board of Directors come calling, angrily waving the latest shareholder report.