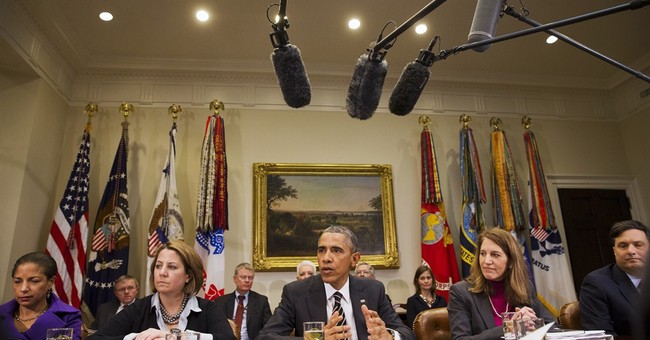 Trending
Democrats are the masters of deceptive persuasion, meaning they will take our attention off something they have really screwed up and put it on something that's not quite so bad. And chief among those masters is he who resides at 1600 Pennsylvania Ave. in Washington, D.C.

For example, let's look at the bumbling idiot Jonathan Gruber, who has repeatedly said that the key for passing Obamacare was the stupidity of the American people.

When Gruber was called before the House Oversight and Government Reform Committee to explain himself, he ducked and weaved questions, to the point that even Rep. Elijah Cummings, D-Md., couldn't take it anymore. He told Gruber he had just handed the Republicans "a public relations gift."

I was shocked when Cummings said that, because he was more concerned about the production of a Democratic nightmare than he was about getting at the truth of what Gruber had said. That is politics at its very lowest!

So what did the Democrats do to take the people's mind off this PR nightmare? (I can just see the White House and leading Democrats desperately trying to come up with something to distract the American people. I would have loved to have been a fly on the wall as the panicked Democrats tried to find a solution!)

Voila! Let's release the Senate Intelligence Committee's report about how the CIA misled Congress and was illegally torturing detainees in the war on terror on the very same day as Gruber's congressional grilling!

For those who are living on a political island, it's called wag the dog, a strategy in which a leader diverts negative attention away from a politically damaging issue to an issue of allegedly greater significance, which often builds up his character and reputation while tearing down his opponents. The goal is for the attention to the latter to drown out the negative press of the former event.

The classic example happened in 1997, when Tinseltown produced a movie by the same name, "Wag the Dog," about an American president who started a war in the Balkans to distract people from his sex scandal. A little more than a year after its release, then-President Bill Clinton, while facing a sex scandal, actually entered us in a war in the Balkans.

There's no better tail-wagging Washington weasel than the current president himself. Or do you think strokes of deflective luck just keep coming Barack Obama's way as his administration fumbles and tumbles in its cesspool of ineptness?

You think the Democrats just happened to release a report shredding the CIA and Bush administration (again) on the same day as Gruber's garbage testimony?

And I'm sure it was a coincidence in December 2009 -- at the very moment when Obamacare's passing seemed to be in jeopardy in the Senate -- that Obama ordered the mission for the U.S. to attack an alleged al-Qaida camp in Yemen that allegedly caused the deaths of civilians, including women and children.

And I'm sure it was just a coincidence a few years into Obama's presidency -- when he was being hit hard from Main Street to Wall Street about the skyrocketing price of oil and the failure of his economic stimulus and policies -- that he unilaterally decided it was a good time to start dropping bombs on Libya.

And I'm sure it was just a coincidence that when National Security Agency whistleblower Edward Snowden prompted Obama's scandal about electronic spying on the private lives of almost every voter in America, the president thrust our attention oversees with his surprise decision to provide weapons, ammunition and air power to the Syrian rebels.

And I'm sure it was just a coincidence that when Obama and his Department of Veterans Affairs started to nosedive over the debacle in the veterans hospital, Obama again lured our eyes abroad by deciding to trade five Guantanamo Bay detainees for Sgt. Bowe Bergdahl.

And I'm sure it was just a coincidence that when the select committee formed to investigate what really happened in Benghazi, Libya, Obama and his cronies drew the world's attention to how much they were concerned for the kidnapped Nigerian schoolgirls. (All that heartfelt concern, yet then-Secretary of State Hillary Clinton refused to declare Boko Haram a terrorist organization.)

And I'm sure it was just a coincidence that when the Islamic State group was hacking the heads off Americans in the Middle East, Obama put people's attention over in Africa, sending 3,000 military personnel to Liberia to help combat Ebola, the Pentagon's No. 1 priority. (Remember Ebola, the virus the White House initially said would never reach the U.S.?)

And I'm sure it is just a coincidence, too, that Obama has utilized the recent riots and protests over police brutality for his political expediency. (He actually prefers to have others create the wag for him!) As the media and nation focus their attention on race baiting, Obama's executive order about illegal immigration has been pushed out of their minds.

Milwaukee County Sheriff David Clarke, who would make an exceptional secretary of homeland security, even said about Obama: "He built this racial divide. It was a wound that had been healing for a number of years -- a number of decades, I should say -- and he reopened it with his divisive politics ... (a) divide-and-conquer strategy (that has been) very destructive for America."

Obama has taken past presidents' periodic political manipulation to a new level; all we see is his tail. His foreign policy has been built largely upon wagging the dog to get attention off his failed domestic leadership and policies, including Obamacare. That is what started this recent "wag the dog" show. He wanted to divert the American public's focus from Gruber's testimony about Obamacare, so now there's the Senate report about the CIA.

That is one more reason I believe that Obama deserves an Oscar for his role as "Master of Deceptive Persuasion"!

Franklin D. Roosevelt hit the political nail on the head when he said decades ago: "In politics, nothing happens by accident. If it happens, you can bet it was planned that way."