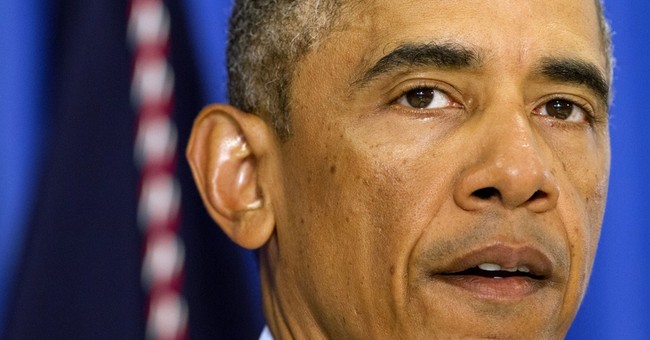 Trending
Last week, I built a case for how the Islamic State's monstrous brutalities include the summary killing of men, women and children, including by crucifixion. That was before the world heard of the beheading of courageous U.S. journalist James Foley, which demonstrated just how psychotic and cruel the Islamic State is.

Today I will build further on the Islamic State's horrors and crimes against humanity and then conclude by explaining why President Barack Obama's laissez-faire mentality toward U.S. enemies is not only emboldening them but also drawing the U.S. closer and closer to another world war.

Reuters reported last week, "Refugee Samo Ilyas Ali has nine children to feed but he can't focus on the future because the sounds of women and children crying out for help while being buried alive by Islamic State militants in northern Iraq often consume his mind."

Just two weeks ago, Islamic State terrorists came in the night with machine guns and began to dig ditches for mass graves in Ali's village. A tearful Ali, who is a 46-year-old former grocer, explained: "We did not understand. Then they started to put people in those holes. Those people were alive. After a while we heard gunfire. I can't forget that scene. Women, children, crying for help. We had to run for our lives. There was nothing to be done for them."

If you still believe that the Islamic State wouldn't brutally murder children in cold blood, consider a recent Anglican Communion News Service report. An emotionally distraught chaplain and Canon Andrew White explained that the 5-year-old son of a founder of Baghdad's Anglican church was "cut in half during an attack by the Islamic State." White explained: "I'm almost in tears because I've just had somebody in my room whose little child was cut in half. I baptized his child in my church in Baghdad. This little boy, they named him after me. He was called Andrew."

No wonder a large number of Christians fled the northern city of Mosul after the Islamic State's message -- convert to Islam, get out or be killed -- was broadcast by loudspeakers from the city's mosques. The Islamic State's leader, Abu Bakr al-Baghdadi, said that for Christians who don't convert or leave, "the only option is the sword."

Special advisers for the United Nations explained: "These reports are shocking in the extreme. They show, in very clear terms, the complete absence of humanity of the perpetrators of these crimes." They are grave violations of human rights and international humanitarian law.

Yonadam Kanna, Iraq's most prominent Christian politician, said, "This is ethnic cleansing, but nobody is speaking up."

There's even a more appropriate word for it: genocide. And no one is speaking up?

Kanna's words bring me back to Edmund Burke's words: "The only thing necessary for the triumph of evil is for good men to do nothing."

Consider the words of Adam Taylor, foreign affairs reporter for The Washington Post. He described the growth of the Islamic State radicals as already "worryingly global. (Its) distinctive black-and-white flag was flown in London last week, and leaflets supporting it were handed out in the city's Oxford Street on Tuesday. An American was arrested at a New York City airport this month after authorities were tipped off by his pro-Islamic State Twitter rants. The group has began publishing videos in Hindi, Urdu and Tamil in a bid to reach Indian Muslims. There are credible reports that the group is hoping to target Asian countries -- and Indonesia is so worried that it banned all support for the Islamic State."

This isn't fear-mongering. It's the global reality of the war on terror -- not an "overseas contingency operation" as Obama calls it.

To show how clueless our president is to the Islamic State's brutalities and mission, consider that in an interview with The New Yorker in January, Obama used the Los Angeles Lakers basketball team and its key player, Kobe Bryant, as an analogy to suggest that the Islamic State was not a significant threat to the U.S. or world.

Our president said: "The analogy we use around here sometimes, and I think is accurate, is if a jayvee team puts on Lakers uniforms that doesn't make them Kobe Bryant. I think there is a distinction between the capacity and reach of (an Osama) bin Laden and a network that is actively planning major terrorist plots against the homeland versus jihadists who are engaged in various local power struggles and disputes, often sectarian."

Obama's "don't do stupid stuff" foreign policy is never going to cut it -- ever. Actually, it is working us right back into a war by avoidance, indecision, conciliatory compromise and wimpy passive-aggressive unilateral decisions that have no basis in war strategy or reality.

Lastly, my wife, Gena, and I join with millions of other Christians around the world to pray for Christians and peace-loving Muslims. We pray for their protection, deliverance and freedom.

And for Christians abroad in the war-torn Middle East, I add these words from Jerry Newcombe -- prolific author, producer and columnist -- who couldn't have put it better about those who kill in the name of God: "Jesus said to His followers that the day will come when men will kill you and think they are offering a service to God. They are deceived in thinking that God is pleased with this offering. ... A harshness indeed, like the kind that could kill innocent Christians, even children, in Iraq and Syria. This barbarism should be a wake-up call to the West."

This Is How Minnesota's Democratic Governor Responded to New Round of Riots In the State
Julio Rosas
After Report on BLM Co-founder's 'Real-estate Buying Binge,' Fellow Activist Calls For Investigation
Leah Barkoukis