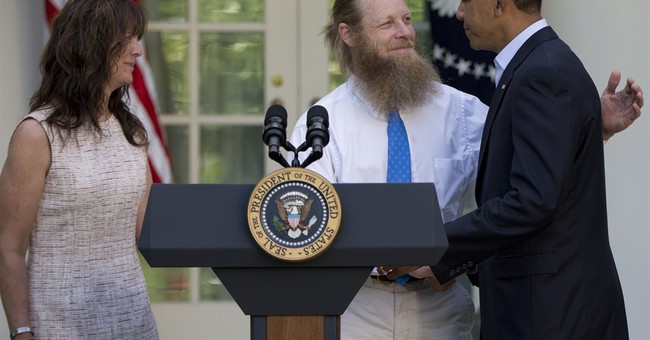 Trending
I have four colossal disagreements with how President Barack Obama cut the deal for the prisoner swap of five senior Taliban leaders for U.S. Army Sgt. Bowe Bergdahl; the former, the White House itself admits, could "absolutely" rejoin terrorist cells.

Sure, I have far more than four issues with how it all went down -- for example, the absolute avoidance and disregard of constitutional submission and congressional consent. But this administration seems to have little regard for proper protocol with anything, so I'm going to focus here on a few different angles of argument.

No one is overlooking or minimizing the understandable elation of Bergdahl's family over his homecoming. But was there really no other military or negotiating option than to return five of the most hardened criminals and enemies of the U.S. to the battlefield, where at least six other soldiers gave their lives trying to rescue Bergdahl?

Our whole country -- including those across the political spectrum, from Sen. John McCain, R-Ariz., to Sen. Dianne Feinstein, D-Calif. -- is asking: Why, in the midst of war, would Obama release five of the greatest anti-American terrorists in exchange for Bergdahl, who, according to several of his own military colleagues and superiors, abandoned his post and platoon and likely even became sympathetic with the Taliban mission?

While in Poland, he said, "This is what happens at the end of wars."

But what about if the war hasn't ended, which is exactly where the U.S. is now? I don't know whether Obama has noticed recently, but military personnel are still fighting on the battlefield. For the president, the war is in the past tense, but the battle continues in the present.

Duke University political science professor Peter Feaver, who served as a National Security Council special adviser under George W. Bush, explained to The Washington Post: "The deal the president struck is a deal you strike when the war's over. The military, they're thinking about, 'We're still fighting this war.' For them the war's very much still on, and the question of will we win or not is up for grabs."

So this is the first of my four vehement objections to Obama's handling of the prisoner of war swap:

1) The war is not over; military personnel are still fighting.

My second objection is found in the president's further justification this past week: "This is what happens at the end of wars. That was true for George Washington; that was true for Abraham Lincoln; that was true for FDR; that's been true of every combat situation -- that at some point, you make sure that you try to get your folks back. And that's the right thing to do."

But is that true? Did Washington, Lincoln and Roosevelt engage in prisoner swapping in the same vein as Obama? (Some have come to the president's aid in saying so.)

President Obama justifies his grounds for his prisoner exchange with the fact that Washington engaged in similar prisoner exchange with the British during the Revolutionary War. What Obama doesn't tell you, however, is that both the Brits and the colonists exchanged prisoners of war because both had "few facilities to accommodate large numbers of prisoners," according to the Mount Vernon Ladies' Association.

And as far as specifically buying back colonists from captivity at the price of handing over British soldiers -- as Obama did with Taliban leaders -- the Mount Vernon Ladies' Association explained exactly what Gen. Washington's policy was: He "made sure that no states holding military prisoners should trade a British soldier for an American citizen. Washington believed that this would have legitimized the British capture of more citizens, most of whom were largely defenseless."

Mr. President, did you want to read that policy again?

In regard to Obama's comparison with these stellar commanders in chief, I want to respond just as vice presidential candidate Lloyd Bentsen responded to fellow candidate Dan Quayle during a 1988 debate after Quayle likened his political experience to that of John F. Kennedy: "I served with Jack Kennedy. I knew Jack Kennedy. Jack Kennedy was a friend of mine. Senator, you're no Jack Kennedy."

I've studied George Washington, and, Mr. President, you're no George... (Oh, you get the point!)

That's my second objection to the president's justification:

2) Barack Obama is no George Washington.

And this present prisoner swap -- in the midst of a modern-day war on terror, in which our enemies use our planes as missiles and salivate over suitcase nukes -- can by no means find its equal during the Revolutionary War or another war in which (however dangerous) muskets, single-shot rifles and cannonballs were used.

Next week, I will give my third and fourth reasons for disagreeing with how Obama cut the deal for Bergdahl.