Barbara Bush: 'No More, You're Killing Us' 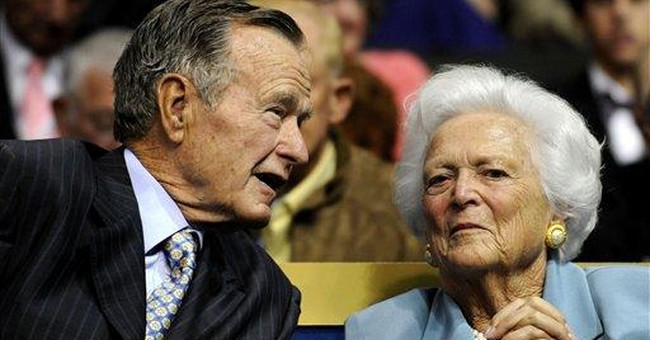 Former first lady Barbara Bush said on Greta Van Susteren's "On the Record" this past week: "We've got a real problem in public schools. ... This is a national crisis. It's as bad as anything in our country."

When Van Susteren was pointing out from Bush's own op-ed piece that "Texas (is) 36th in the nation in high-school graduates (and) 3.8 million Texans don't have a high-school diploma," Bush said, "No more, you're killing us."

Bush was commendably protecting Texas pride as she told Van Susteren not to cite any further degrading statistics about the state of Lone Star education, though she herself references it in her op-ed piece:

--Texas ranks 33rd in the nation on teacher salaries.

Such low verbal and literacy scores make it even more unbelievable that just this past week, some of the state's educational administrators joined the feds in seeking to mandate Arabic classes for Texas children. No joke!

The Arabic studies program -- funded by a five-year, $1.3 million Foreign Language Assistance Program federal grant -- was to begin this semester at Cross Timbers Intermediate School and then spread to neighboring schools in the Mansfield Independent School District.

Thank God for the parental passions and patriot fires of the almost 200 parents who showed up at a meeting last week to question the wisdom of school officials. They are fighting in their own personal education Alamo and presently have the upper hand. For the moment, the school district has backed off plans for its Arabic studies program.

With 14 percent of American adults (32 million) incapable of reading a newspaper or instructions on a prescription bottle, don't you think federal monies could be put to better use by helping Americans learn to read and write English?

I appreciate Bush's non-politically correct stance on the primacy of English in America, which she echoed to Van Susteren: "I'm against English as a second language. My great-grandmother came here as a German. She didn't have someone give her English as a second language. She learned it in three months. It's survival. And you see it in schools all around now where you're allowed to speak English only, and you sink or swim. And they swim, because they're immigrants from all different countries. I've seen a school in Boston where they asked me to read, and I said, 'Read? They all speak 80 different languages.' But in three months, they learned English."

What Bush and I (and others in this educational reform movement) are essentially calling all of us to do is fight in a local education Alamo! To square off and fight against all the negative forces that besiege our children and impede their proper education. You don't have to have kids to engage in this culture war; you only have to be concerned about their future -- America's future.

It is people like the 200 parents helping to overturn that Texas school district's decision to mandate classes on Arabic who are showing the way. They prove another point Bush made to Van Susteren: "I don't think government can do everything at all. Parents, grandparents, neighbors, churches, everybody ... we've got to get ourselves geared up and not be lazy parents and not be lazy neighbors, but we've got to help children."

The only way to get America and its educational system back on track is to take back the primary role of parenting from teachers and other societal guardians (including Big Brother government). That also includes our not expecting those who lead Sunday schools to be the primary spiritual teachers of our children, rather owning that area of their maturation, as well.

What U.S. educational reform entails is that we all find a place in the battle. It might mean that you join an influential group that makes decisions in your local schools or pressures those who do.

What I'm saying is this: Be proactive. Don't wait for first lady Michelle Obama to correct your children's school diet before you do something about it. Ensure that civic organizations in your area, including tea party groups and churches, are activists for your public schools. Call parishioners out of the pews and into school community outreach.

My wife, Gena, and I are fighting for the next generation, and our life mission is to take physical education up a notch in public schools by offering our KickStart Kids program. For years, we also have supported The Barbara Bush Foundation for Family Literacy, and we encourage you to do the same by going to its official website, at http://www.BarbaraBushFoundation.com.

It all comes down to one question every citizen in our country must answer: Are you spectating or fighting for America's children in your local education Alamo?