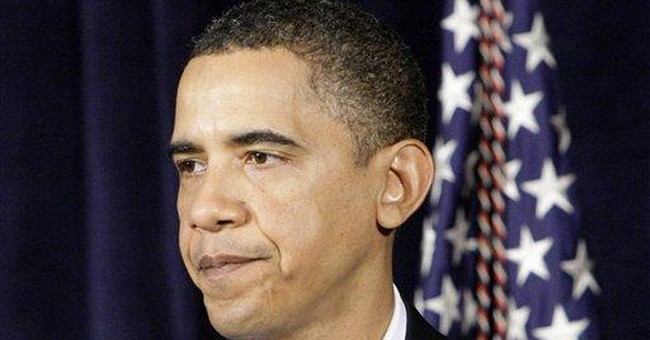 As I wrote last week, I knew that President Barack Obama's Christian message in his Christmas address was going to be the weakest in presidential history. But never did I expect to hear him dodge children on the main message of Christmas and then teach them a revised version.

Here's the actual transcript from the president's visit last week to the Boys & Girls Club in Washington, D.C. (with a little of my own parenthetical Christmas commentary, to boot -- identified by "CN" in parentheses):

(CN: So far so good, Mr. President, but there's a child with his hand up right in front of you!)

THE PRESIDENT: Do you know?

CHILD: The birth of baby Jesus.

(CN: Not exactly the response the president was looking for. If you can't see him in your mind's eye getting a little hot around the collar, check out the video version here.)

THE PRESIDENT: The birth of baby Jesus and what he symbolizes for people all around the world is the possibility of peace and people treating each other with respect. And so I just hope that spirit of giving that's so important at Christmas -- I hope all of you guys remember that, as well. ...

(CN: Where is Rep. Joe Wilson when you need him? Wrong, Mr. President! You didn't speak for the majority of Americans when you declared in Turkey last April that "we are not a Christian nation," and you don't speak for "people all around the world" about the birth of the baby Jesus, especially when you define him merely as a community coordinator and social reconciler. His main mission and message was as the Redeemer of mankind -- the savior with a self-confessed mission to "give his life as a ransom for many" to forgive all our sins and reconcile God and humans' relationship.)

THE PRESIDENT: ... You know, it's not just about getting gifts but it's also doing something for other people. So being nice to your mom and dad, grandma, aunties, showing respect to people -- that's really important, too; that's part of the Christmas spirit, don't you think? Do you agree with me?

(CN: Nothing like a little presidential social pressure to prompt an affirmative answer from children.)

THE PRESIDENT: You do? (CN: Then another child raises his hand, so the president leans over and asks him a question.) Do you have an interesting observation?

CHILD: I know why we give gifts to other people.

THE PRESIDENT: Why is that?

(CN: Could this get any better? Out of the mouths of babes! But you know there's some presidential spin coming, don't you?)

THE PRESIDENT: That's exactly right. But the three wise men -- the reason (CN: A sign literally falls off the wall. Sign from God? What timing!) -- uh-oh, I thought that was the cookies going down. We couldn't have that. You know, the three wise men -- if you think about it, here are these guys. They have all this money; they've got all this wealth and power, and yet they took a long trip to a manger just to see a little baby. And it just shows you that just because you're powerful or you're wealthy, that's not what's important. What's important is what's -- the kind of spirit you have.

(CN: The wise men traveled across the desert "just to see a little baby"? Let me quote from the Gospel according to Matthew 2:11: "And they bowed down and worshipped him" as the savior of the world. Why is it -- any chance Obama has to dive deeper into Christianity's creed? -- he rises to the surface and neuters the subject?)

THE PRESIDENT: So I hope everybody has a spirit of kindness and thoughtfulness and everybody is really thinking about how can they do for other people -- treating them well, because that's really the spirit of Christmas. Does everybody agree with that?

THE PRESIDENT: I agree with that. Well, you guys all seem like really sharp, sharp young people. And I'm very proud of you. And let me just ask you one last question. Is everybody here working pretty hard in school?

THE PRESIDENT: OK, because the thing that I want everybody to remember, the most important message I can leave is, is that you guys have so much potential; one of you could end up being president someday. But it's only going to happen if you stay focused and you work hard in school. And, you guys, there's nothing wrong with having fun and fooling around and playing sports and listening to rap music and all that stuff. But I want you guys to read and hit the books and do your math, because that's really what's going to determine how you do in the future. All right? That's the most important thing you can do.

So let me see whether I have this straight. Obama's Christmas theology and mission is thus: Jesus is Gandhi. The wise men were non-greedy corporate executives on a baby tour. The "most important message" at Christmas is personal potential. And the "most important thing" children can do for their futures is read and do math.

(If you want to help children understand the role religion had in our early republic, I encourage you to support the efforts of the National Council on Bible Curriculum in Public Schools, which, to date, has had its Bible curriculum voted into 515 school districts -- 2,026 schools -- in 38 states, and more than 360,000 students have taken the course).