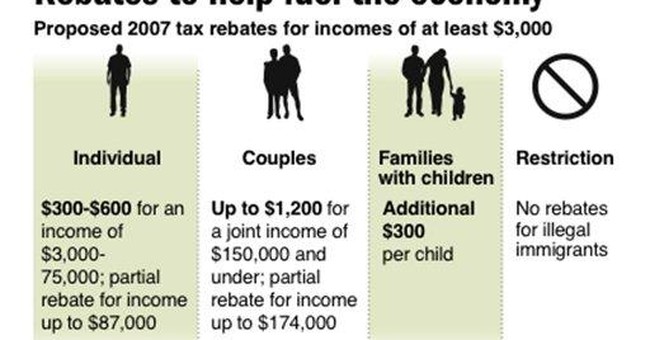 It was not so long ago that Congress crafted a piece of legislation designed to “stimulate” the American economy. In a few short weeks from now we will begin to receive those stimulus checks aimed at boosting the nation’s economic growth, but will it actually work? As in all discussions of economics there are always two very different opinions that are offered as solutions to stimulate the economy.

One of the strongest proponents of the demand side of economics was a man named John Maynard Keynes. Keynes was a British economist and socialist that greatly influenced the economic policies of the twentieth century. His policies have come to be called Keynesian economics.

The man most recognized as the proponent for supply-side economics in the twentieth century was Milton Friedman. Friedman won the Nobel Prize in the 1970’s for his economic ideals, which were so revolutionary they transformed the nation of Chile from a dictatorship to a more open and free nation. This is where the rubber meets the road. Friedman showed the power of supply-side economics by using it to completely transform a dictatorship and prevent a war in that nation.

In the 1920’s, President Calvin Coolidge cut tax rates by such a large degree, the economy soared and the standard of living improved for Americans by and large. This period was called the “roaring twenties.” Ironically, it was demand-side economic policies advocated by Keynes that brought a halt to the roaring twenties.

Many people today believe that the New Deal policies of FDR and the Democrats of the 1930’s ended the Great Depression. Actually, the Great Depression was made to be even more severe by the Keynesian policies of our government in the 1930’s. During that time federal spending tripled in order to pay for new programs and expand existing ones. The result was a 27% drop in the nation’s Gross Domestic Product. This means the business community was producing a lot less product and subsequently hiring fewer personnel.

Those tax and spend policies actually took more capital away from the private sector, thus perpetuating the economic woes of the nation. What the nation needed then more than any time in our history was more private capital to stimulate the economy. That is why tax cuts are so crucial to economic growth; they allow more capital to flow through the economy and create more products and jobs as a result.

Still not convinced? In the 1960’s, President John Kennedy used supply-side economic policies to stimulate our economy through income tax rate cuts and the economy soared. The GDP grew by 50.5% as a result.

In the 1980’s, Ronald Reagan used supply-side economic policies to cut income tax rates and again the economy exploded, leading to economic growth every month for seven years in a row.

Once again, it was Keynesian policies that stopped that economic growth when George H. W. Bush broke his campaign promise to not raise taxes and signed a Democrat tax increase bill. The result was an economic recession.

In 2003, President George W. Bush, along with a newly elected Republican majority in both houses of Congress, cut income tax rates and the nation’s economy grew immediately by 4.4%. It is interesting to point out that the rebate checks and tax cuts of 2001 helped grow the economy by only 1.9%.

Clearly, cutting taxes on income, business, trade and investment yields a much greater return for the American people than rebate checks. Thus, a true stimulus package would contain cuts in income tax rates, the corporate tax rate so our nation’s business community can compete in a global market, a cut in the capital gains and dividend tax rates to encourage more investment in the economy and a repeal of the inheritance tax, which is sometimes called the “death tax.”

A stimulus package of rebate checks alone is not the best solution to a sluggish economy, as the money returned to the taxpayer will only help the economy for a month or two at best.

Congress and the president should have pushed for a reduction of tax rates on income, business and investments in order to have long-term growth and expansion of our economy.

The evidence of history shows that only through supply-side economic policies can our nation create more jobs, produce more goods and expand the size of the economy -- which in turn begins to swallows up the deficit -- along with a greater standard of living for everyone. Anything less is not really much of an economic stimulus plan.