Chris Talgo
|
Posted: Jul 16, 2022 12:01 AM
Share   Tweet
The opinions expressed by columnists are their own and do not necessarily represent the views of Townhall.com. 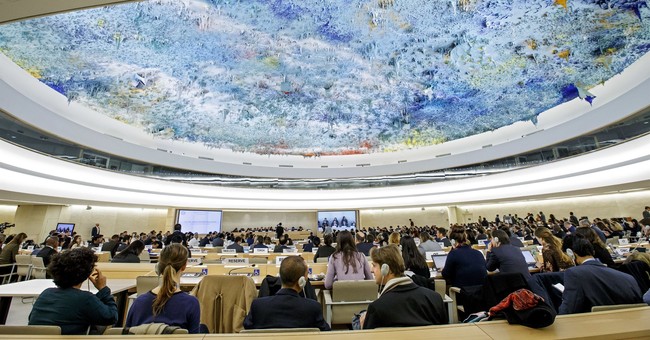 Since 1789, when the Constitution was officially ratified, the U.S. government has retained total dominion over domestic issues like protecting the civil rights of American citizens—as it should. However, most young Americans think this is an antiquated notion and would rather have international organizations oversee that American citizens’ civil rights are safeguarded.

According to a new poll conducted by The Heartland Institute and Rasmussen Reports, 53 percent of young voters (aged 19 to 39-years-old) believe the U.S. government should surrender its sovereignty over the protection of American citizens’ civil rights to the United Nations.

It is not that surprising that young Americans favor the United Nations over the U.S. government when it comes to ensuring the civil rights of American citizens are protected, considering that according to the same poll, 59 percent think America’s institutions are fundamentally sexist, and 61 percent believe America and most of its institutions are fundamentally racist.

Yet, in what can only be described as an acute case of cognitive dissonance, 70 percent of this same cohort of Americans are “very” or “somewhat” proud to be an American. What’s more, 62 percent of young Americans “somewhat” or “strongly” agree that the United States is the best country in the world.

So, the vast majority of young Americans are proud to be American and believe the United States is the best country in the world, but, they still prefer that the United Nations have power over protecting their civil rights. What could possibly be the reason for this?

Well, one explanation, albeit a simple one, is that most young Americans have become raptured with the rise of globalism.

In recent years, globalism has been gaining momentum, especially among the world’s youth.

For instance, a 2017 Western Union study of 10,000 millennials across 15 countries, titled “Globalization: A World View of the Future,” found, “the majority see themselves as global citizens rather than a citizen of any one country.”

The study also notes, “Many expressed concerns that governments today are not fulfilling their hopes or representing their generation’s views. Two thirds believe that global institutions like the United Nations are more representative of them, rather than national or local governments (61% vs. 48% and 44%).”

As former Western Union President and Chief Executive Officer Hikmet Ersek put it, “The world is changing and there is a new economic power shift driven by a new generation of global citizens. They are shaping the future, and inspiring others to do the same. They are redefining globalization to one of ‘personal globalization’ where the pursuit of limitless cross-border movement, cross-border digital communication, and creative lifestyle drives new economic power.”

I wonder if young people are aware that the United Nations (UN) currently has a Human Rights Council (HRC)?

In 2006, the United Nations chartered the HRC, with the mission of, “strengthening the promotion and protection of human rights around the globe and for addressing situations of human rights violations.”

I also wonder if the same young people who overwhelmingly prefer that the UN protect their civil rights, instead of the U.S. government, know that China, Cuba, Venezuela, and many other reprehensible regimes are present members of the UN’s HRC?

Moreover, I wonder if these gung-ho globalists are aware that the UN has quite a history of corruption, double-dealing, and all sorts of malfeasance?

A long time ago, the Founding Fathers came to the realization that local governance is always preferable to a far-away, out-of-touch governing body. Such is why the architects of the U.S. government created a structure that favors local and state-based decision-making over national “one size fits all” approaches.

The same principle applies to the situation at hand. As American citizens, we are far better off entrusting that our civil rights are protected by our own government, as flawed as it may be, because the alternative of off-shoring this responsibility to a global organization that does not understand our unique laws and cannot exercise authority over We the People is absurd on its face.

Hopefully, as they mature and become wiser, the vast majority of America’s youth will realize that handing the United Nations the power to protect their civil rights would open a Pandora’s box that could lead to the United Nations making all types of decisions that would impact their daily lives, most likely for the worse, not better.

After all, if history has taught us anything, once a governing body is granted power, it almost always craves more control.