Tom Cruise’s Meltdown Over COVID Protocols Is Understandable and Defensible

Chris Talgo
|
Posted: Dec 17, 2020 1:20 PM
Share   Tweet
The opinions expressed by columnists are their own and do not necessarily represent the views of Townhall.com. 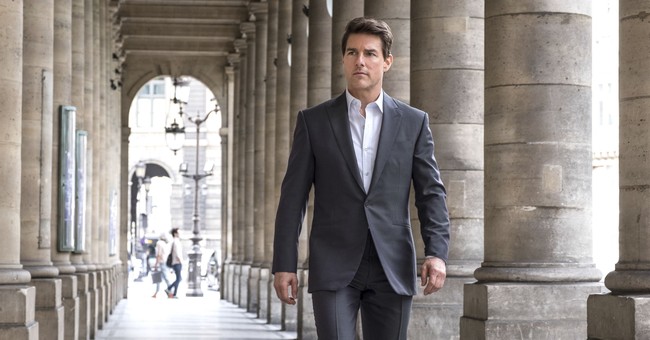 While filming the seventh installment of the Mission Impossible movie franchise in London, Tom Cruise unleashed an epic rant about following COVID protocols while on-set.

The rated-R audio, recently made public, shows how the stress of following COVID guidelines has even made Cruise, Hollywood’s golden boy, into a villain.

However, Cruise should not be totally ridiculed for his on-set diatribe. Actually, he made some really good points.

For instance, Cruise highlighted the fact that if the production of Mission Impossible 7 were to be stopped because of the crew’s lackadaisical attitude toward COVID guidelines, many people would be hurt.

According to Cruise, “They’re back there in Hollywood making movies right now because of us. We are creating thousands of jobs, you motherf***ers.”

As most of Hollywood has gone into seclusion, and movie production has halted to a standstill, Cruise has bucked the trend and insisted that the show (or movie) must go on.

He added, “We are not shutting this f***ing movie down! Is it understood? … You can tell it to the people that are losing their f***ing homes because our industry is shut down. It’s not going to put food on their table or pay for their college education.”

Cruise makes a valid point. The movie business, like most industries, is struggling to stay afloat.

Making movies during the pandemic is a fraught venture. As Cruise explains to the crew, “That’s what I sleep with every night. The future of this f***ing industry! So I’m sorry, I am beyond your apologies.”

Cruise has put his money where his mouth his when it comes to making MI7 during a pandemic. According to reports, he has spent more than $700,000 of his own money for personal protective equipment and other resources so the crew is safe and the studio’s liability concerns are reduced.

No wonder he went apoplectic on the crew, he obviously is under immense pressure to ensure that things go smoothly on set.

In fact, Cruise is on a mission, pardon the pun, to show the world that film production can continue as the pandemic drags on.

“We are the gold standard,” said Cruise. “I'm on the phone with every f***ing studio at night. Insurance companies! Producers! And they're looking at us, and using us to make their movies.”

“That's what I'm thinking about. That's what I'm doing today. I'm talking to Universal, Paramount, Warner Bros. Movies are going because of us. We shut down, it's going to cost people their f***ing jobs, their homes, their family—that's what's happening. All the way down the line,” the actor added.

Once again, Cruise should be applauded, not castigated, for his willingness to put himself on the line so that movies can continue to be made and jobs can remain filled.

Although his language was coarse and his hostility towards some of the crew members has caused many to criticize Cruise, his message is spot-on.

During the pandemic, we have been told (and in many instances, forced) to stay home, hunker down, and “stay safe.”

Cruise understands that this strategy is untenable and leading many into poverty due to unemployment.

At the end of the day, Cruise, like many brave Americans, is just trying to do his job. And, he understands, unlike many of our political leaders, that people need to be employed.

Going to work, even during a pandemic, is both possible and necessary. Whether it is making a movie, serving meals in a restaurant, teaching children in-person, or providing a place for people to work out, society must proceed, with proper precautions taken.

Obviously, Cruise could have been more G-rated in his choice of words, but the essence of what he said is justified. And I bet most Americans would agree with him.

Share this on Facebook
Tweet
Why Democrats Think the 'Walls Are Closing In' on Trump...Again
Matt Vespa
Mask Showdown: Youngkin Issues Response to Defiant School Districts
Leah Barkoukis
Why One House Democrat Is Calling for a New CDC Director
Leah Barkoukis
'I Recommended Not Responding': VA School Accidentally Responds to Email from Reporter About Mask Mandate
Landon Mion
Rand Paul Tweets Out Asking If 'Snot-nosed Censors at YouTube Will Come to My Office and Kiss My …'
Rebecca Downs
Loudoun County Public Schools Remove Sexually Explicit Book from Library
Landon Mion