Chris Talgo
|
Posted: Nov 14, 2020 12:01 AM
Share   Tweet
The opinions expressed by columnists are their own and do not necessarily represent the views of Townhall.com. 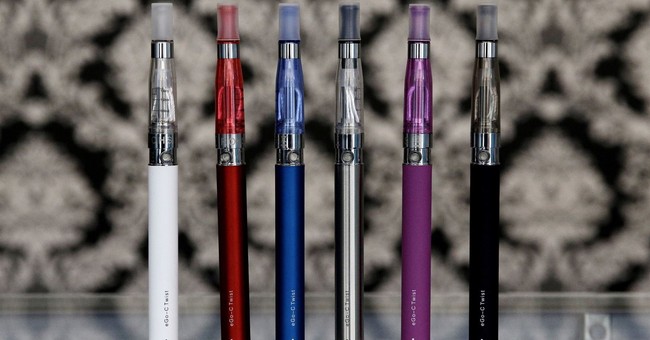 Excise taxes, often referred to as a nuisance or sin taxes, are typically implemented to raise revenues and deter certain “unhealthy” behaviors. In 2014, state governments collected approximately $32 billion by taxing so-called sinful products and activities, including gambling, smoking, and alcohol.

As Clement Freud noted, “If you resolve to give up smoking, drinking, and loving, you don't actually live longer; it just seems longer.”

Several states recently held ballot initiatives to increase taxes on all nicotine products including vape products. Not shockingly, many of these referendums passed, even though e-cigarettes are used as harm reduction tools and have a positive impact for public health, as an option for people instead of combustible tobacco products.

For example, Colorado voters passed Proposition EE, the Tobacco and E-Cigarette Tax Increase for Health and Education Programs Measure on Election Day. This will lead to higher taxes on cigarettes and tobacco products, along with added taxation on vape products that contain nicotine.

Today, cigarettes are taxed at 84 cents per pack in Colorado. After implementation, the new tax will incrementally increase this tax on cigarettes to $2.64 per pack, in addition to hiking taxes on tobacco products.

Like Colorado, Oregon voters recently passed Measure 108, which will increase taxes by a whopping 65 percent on all tobacco and e-cigarette products. The measure, of course, was in the name of public health.

Most often, these measures do not achieve their primary goal, which is to reduce certain behaviors that those in power deem unhealthy. All too often, residents simply buy these products elsewhere.

This ultimately leading to a thriving black market for cigarettes and other tobacco and nicotine products. In the long run, small businesses are negatively impacted because they lose business and cut jobs.

Although politicians would never say it, these types of taxes are unsustainable and are typically used to subsidize out-of-control government spending.

Taxation is theft, but when taxing “sinful” products, the government will always argue that the tax is a “good public benefit,” even when it isn’t.

Sin taxes are social engineering on steroids, and it is un-American. Coloradans and Oregonians have a proud legacy of rugged individualism, predicated on the premise that they have the ability to make decisions for themselves. They are also capable of dealing with the consequences.

Because vaping is used as a viable method to quit smoking, it seems strange that regressive taxes on these products would even be up for discussion. Regular cigarettes contain up to 7,000 chemicals, whereas e-cigarettes expose one to far fewer, making it a healthier alternative.

A recent study published in the medical journal JAMA found that smokers who vaped used fewer cigarettes per day and were more than one and a half times as likely to quit completely.

If vaping can be used as a tool to kick worse habits, many should question the intent of policymakers in Colorado and Oregon to push these ballot initiatives forward. The unintended consequences of these policies will likely result in the opposite of the original stated intent.

Not only do these taxes potentially harm people who are trying to quit smoking, by hindering their ability to purchase vaping products, it also has detrimental effects on small businesses, as consumers will go elsewhere to shop.

These taxes will impact low income earners the most, as they are operating on smaller margins of income. Governments should stop discriminatory taxing and focus on putting tax dollars back into taxpayer’s pockets by cutting spending and balancing their budgets.