Chris Talgo
|
Posted: Feb 10, 2020 12:41 PM
Share   Tweet
The opinions expressed by columnists are their own and do not necessarily represent the views of Townhall.com. 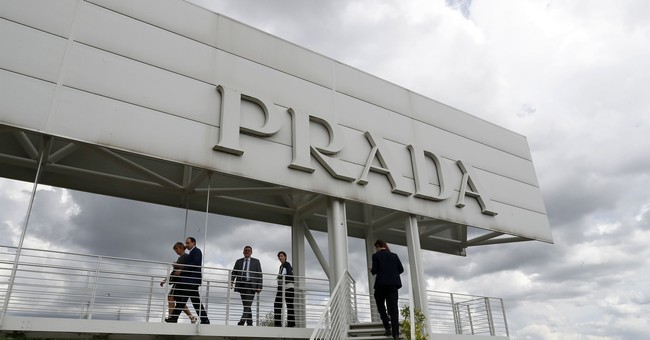 According to The New York Times, “For the last year, the New York City Commission on Human Rights, the law enforcement agency of the municipal government charged with overseeing the city’s human rights laws as they apply to housing, retail establishments and other areas, has been investigating and in settlement talks with Prada, a process culminating in a deal signed on Feb. 4.”

At this point, you may be wondering what human rights atrocities Prada is guilty of, which would constitute a settlement with the NYCCHR. Was Prada running a secret network of sweatshops in the Big Apple? No. Was Prada engaging in child labor? No.

According to the NYCCHR, Prada committed the ultimate sin of selling insensitive toy dolls. Yes, that is correct, the NYCCHR has put Prada in its sights because the company sells dolls that the commission considers racist. Please, take a moment to ponder the absurdity of this alleged fashion faux pas.

The sordid story of the Prada affair should surely make one wary of the power afforded to the NYCCHR. In December 2018, the commission sent a cease-and-desist letter to Prada, ordering the company to stop selling the allegedly racist dolls, after a member of the commission noticed some social media posts decrying the racism of the Prada dolls.

Unfortunately, Prada decided to put its tail between its legs and beg the commission for mercy. Even worse, Prada signed a settlement that will surely have ramifications for other fashion companies and any other entity that runs afoul of the NYCCHR.

Under the terms of the settlement, Prada will ensure that all of its New York employees and executives in Milan undergo racial sensitivity training. Prada also agreed to hire a diversity and inclusion officer, as long as the commission approves of the appointee. As the settlement states, the diversity and inclusion officer will be in charge of “reviewing Prada’s designs before they are sold, advertised or promoted in any way in the United States.”

Wow, as per the terms of the settlement, every single item Prada sells or promotes in America must now be given the go-ahead by the commission’s approved officer of diversity and inclusion. That is quite a tall task for one person. No doubt, Prada will hire an army of diversity and inclusion “specialists” to ensure the company never again sells dolls that could ignite a modern-day race war.

Even more, how did American companies prevent racist merchandise from hitting the shelves and tainting racial harmony before the NYCCHR? The answer is simple. The vast majority of American companies would never fathom, let alone produce, racially-tinged merchandise because guess what—it is really bad for business.

As The New York Times notes, the penalties put on Prada go even further. “A year after signing the agreement, Prada is required to tell the commission ‘the demographic make-up’ of its staff at every level, and summarize ‘Prada’s past and future activities aimed at increasing the number of people from protected classes under-represented in the fashion industry.’”

How insane is this? Prada’s entire employment structure is now at the mercy of the jackboots-wearing members of the NYCCHR too.

Perhaps Deputy Commissioner Sapna Raj let the cat out of the bag when he told The New York Times, “I don’t know that we realized previously so many major fashion houses had this ignorance of the history of racism in this country. We hope companies realize they need to be very careful about how they market and advertise—that they need to have a larger social and cultural consciousness.”

The real question is, do you really want government bureaucrats like Raj determining who companies hire, what companies can make, how they can advertise approved products? As they say, be careful what you wish for.