Trump Well on His Way to Making America Great Again

Chris Talgo
|
Posted: Oct 09, 2018 12:01 AM
Share   Tweet
The opinions expressed by columnists are their own and do not necessarily represent the views of Townhall.com. 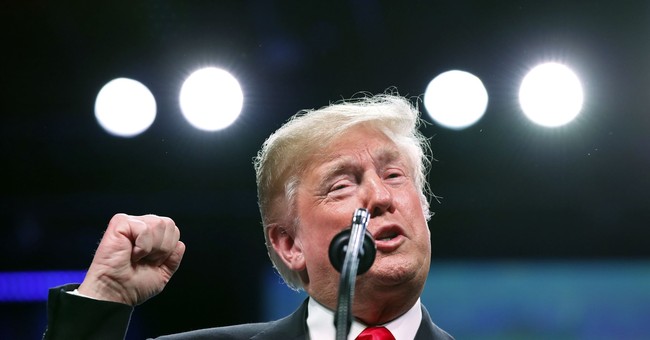 During the 2016 campaign, Donald Trump stated, “Our government has totally failed our African American friends, our Hispanic friends and the people of our country. Period … I ask you this … What the hell do you have to lose? Give me a chance. I’ll straighten it out.”

Almost two years into his presidency, Trump is well on his way to fulfilling his promise. The U.S. economy is flourishing, and more Americans than at any time in modern U.S. history are thriving because of Trump-onomics.

By cutting regulations and taxes, Trump, unlike his predecessor, has provided rocket fuel to the U.S. economic engine. Because of these and many other free-market policies, the American economy is reaching heights it hasn’t experienced in decades.

Since Trump entered the White House, quarterly gross domestic product (GDP) growth has skyrocketed, from an abysmal 0.4 percent to 4.2 percent in the most recent quarter. Annual GDP growth in former President Barack Obama’s first year in office was negative 2.8 percent.

Meanwhile, the Dow Jones Industrial Average has risen by 38.9 percent since December 2016, despite doomsday predictions from many economists. “It really does now look like President Donald J. Trump, and markets are plunging. When might we expect them to recover? A first-pass answer is never … So we are very probably looking at a global recession, with no end in sight,” said Paul Krugman of The New York Times the day after the election.

In January 2017, when Trump entered the Oval Office, the national unemployment rate was 4.8 percent. As of this writing, the unemployment stands at the lowest rate since 1969: 3.7 percent.

Why is unemployment dropping, especially for minorities? Because Trump is a business man—not a community organizer, whatever that means—and he is implementing policies that encourage businesses to create jobs. As John F. Kennedy once said, “a rising tide lifts all boats.”

As Americans are returning to the workforce, they are also relying less on government assistance. In fact, food stamp (Supplemental Nutrition Assistance Program) enrollment has dropped 7.9 percent since January 2017. Even better, welfare (Temporary Assistance for Needy Families) enrollment dropped 9.8 percent during 2017.

As millions of Americans have (finally) been able to obtain a good-paying job, the public’s view of the economy has changed. In fact, “a record-low 12% of Americans currently cite some aspect of the economy as the most important problem facing the U.S., down from 17% last month and one percentage point below the previous low of 13% recorded in May 1999,” according to the latest polling data from Gallup.

In less than two years, Trump’s policies have reduced Americans’ economic anxieties to an all-time low. Multiple indicators and overwhelming public opinion reveal that Trump has already fulfilled his promise to “straighten out” the economy.

However, like a game of whack-a-mole, as Trump solves one problem, another issue has risen to the top of the “nation’s most important problem list.” In the same Gallup poll, 29 percent of Americans cited “Dissatisfaction with government/Poor leadership” as the nation’s top problem. Maybe it is time for Trump to turn his attention toward this problem by fulfilling his campaign pledge to reduce the massive size of the administrative state in Washington, DC—or, as Trump so often put it, “draining the swamp.”

If he’s able to achieve that goal as well, it’s very possible Trump will go down in history as the president who really did “make America great again.”