Chris Stigall
|
Posted: Feb 06, 2020 12:01 AM
Share   Tweet
The opinions expressed by columnists are their own and do not necessarily represent the views of Townhall.com. 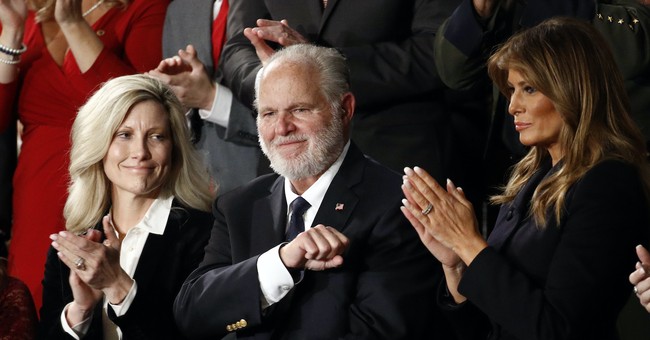 A dear friend of mine once asked me years ago of Rush Limbaugh, “Is he a better conservative or a better broadcaster?” From time to time over the years, we have returned to that debate whenever we’ve marveled at a particular bit of news Limbaugh’s show has made or a particular monologue that was so good we texted back and forth like teens. “Did you just hear what Rush said?”

The question isn’t meant to be answered. It’s probably why my friend and I love to engage in it so often. It’s our way of returning to a discussion of what makes him so damned good.

The first time I remember Rush’s name registering with me was in 1996. I readily admit this will sound like an odd reference, but it’s an important inflection point for me. You might think it has something to do with Bill Clinton or the “Republican revolution” lead by Newt Gingrich. Nope. It was the Mike Nichols movie “The Birdcage.”

Gene Hackman portrays Hollywood’s version of a conservative Republican senator whose daughter wants to marry a boy whose parents are openly gay and own a drag club in Florida. In an attempt to court Hackman’s conservative, politically calculating blessing of the marriage – his daughter and the boy’s family embark on a massive scheme to make Hackman believe the gay couple are a traditional, nuclear, man-woman, married family who just happen to live above the drag club.

Nathan Lane, the flamboyantly gay partner to Robin Williams’ character dresses up as a cartoonish version of what they believe someone like Hackman’s conservative character might feel comfortable – the late Barbara Bush. Big pearls, bows, blonde wig and all.

As Hackman’s character becomes more enchanted with Lane’s super-conservative ruse, Lane pretends to empathize over a huge sex-scandal in which Hackman’s political colleague is caught dead in bed with an underage prostitute.

“Of course, we don’t believe a word of it,” Lane says in a faux, indignant tone. “He was obviously framed. And I for one would like an autopsy.” Hackman, relieved to hear his future in-laws don’t judge him for the scandal replies, “That’s just what Rush Limbaugh said.”

Now, I realize that’s supposed to be a joke at Limbaugh and Republican’s expense at that time in history. It was supposed to make the whole conservative movement and Limbaugh appear unhinged. Kooks who live in denial of the reality they’re awful. It was Hollywood doing what Hollywood does, though by today’s standards it was playful and mild by comparison.

The reason I mention this movie in tribute to Rush is because I was only eighteen years old when I saw it. The only thing I knew as a young man about conservatism was what I learned from Alex P. Keaton. I loved that character specifically because he was so counter-culture to his hippie TV family. Similarly, in the culture of the late 1990’s and Bill Clinton – if a Hollywood movie takes a shot at a guy by name for being a “kook” – I wanted to know what made him a target of their ire. That excited me!

He was obviously making an enormous cultural impact. He was obviously a leader in unconventional wisdom and a counterweight to the whims and trends of popular culture of the day. He instantly registered as important to me because of one, silly movie line.

Still, I didn’t become a serious student and listener of Rush’s until after the tragedy of September 11, 2001. It was at that point in my young broadcasting career I wanted to seek answers about why this awful thing had happened and instinctively I wanted to learn how process and discuss it. Rush became my personal and professional guiding light.

I could write on and on about all the instances and moments he taught and still teaches me about what it means to be a conservative. I’m going to leave the politics of Rush and the education he brings to the nation to people smarter than me.

I’m also going to leave it to my colleagues in broadcasting to discuss his pioneering legacy in our industry and why we’re literally all at work, earning livings today to feed our families today because of his trailblazing.

The undeniable truth of Rush Limbaugh for me, the thing he does better than any other broadcaster I know is connect. That has always been the thing his haters understood, even if they couldn’t articulate it. He formed a bond and a trust that cannot be broken. It’s why he was once called “the most dangerous man in America.”

Rush Limbaugh connects with good cheer, warmth, sincerity, a sense of humor and a sense of the everyman no one else fully possesses or can stylistically equal.

Despite his fame and wealth over a thirty-plus year career, Rush Limbaugh never became cynical, or hateful, or condescending, or mean-spirited. He loves his country and the people who make it work so very much. It leaps from the speakers every day.

Listening to Rush for me is like listening to my dad, or a pastor, or best friend who tells me on days I’m distressed – “It’s going to be ok. We’ll get through this.”

Even this week as Limbaugh shared his diagnoses of advanced lung cancer, he wasted no time doing that thing he does best. Assuring his audience it would be ok. He spoke of his abiding faith in God. That he would be thinking of us, his audience, every day he couldn’t be on the air during treatment.

He assured us he’d do everything he could when he was on the air in the future to make it comfortable and normal for us, even if he’s going through a personal hell many of us will never fully understand.

Rush Limbaugh makes me feel like it’s going to be ok, even when I might logically know things don’t look good. How can someone I’ve never met make me fell like that?

I think I’ve finally answered that question my friend and I have long debated about Rush. He simply can’t make perfect strangers like me feel a bond as I’ve described simply because I agree with him politically. It’s got to be in the way he say things and in the things he sometimes doesn’t say.

It’s that old axiom of effective communication. People won’t always remember what you say, but they’ll always remember the way you made them feel. As he received the Presidential Medal of Freedom this week, tears streamed down my cheeks for a man I didn’t know.

Yes, he’s an important and significant conservative thought leader. But to me, he’s the best broadcaster and communicator our nation will ever know because of the way he makes me feel.