Chris Stigall
|
Posted: Aug 01, 2019 12:01 AM
Share   Tweet
The opinions expressed by columnists are their own and do not necessarily represent the views of Townhall.com. 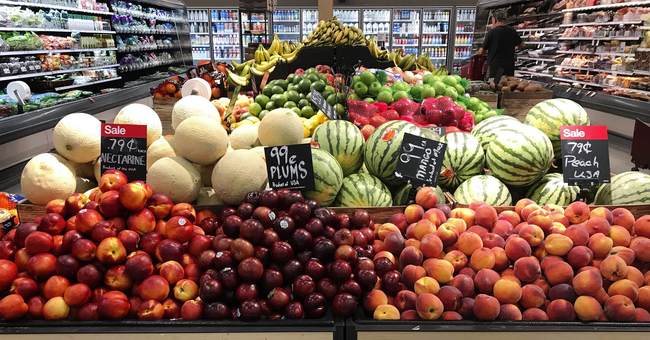 Wandering through the produce section of my local grocery store last week, I kept seeing a couple of different words on the signs above the products. I noticed it on some of the meat and dairy items in the case, too.  “Locally grown,” “locally sourced” and “derived from a sustainable source.”

They are buzzwords young people care deeply about. Surveys suggest they are terms meaningful to many liberal voters specifically. Whole Foods is largely built on those words, assuming you can afford to shop there, which, wealthy elite liberals can.

But what do those words really mean? Take “sustainability” first. Wikipedia defines it this way: “Sustainability is a process for meeting human development goals while maintaining the ability of natural systems to continue to provide the natural resources and ecosystem services upon which the economy and society depend.”

How about locally sourced? That’s easier. It’s just what it says it is.The produce, meat, dairy, etc. you’re thumping and squeezing comes from local sources. Maybe shoppers feel good about that because it helps local farmers. Maybe they like the idea of money staying local to help the community. Maybe it’s the security of knowing they can actually visit where their food is produced.

Bottom line: all these attributes make shoppers feel a greater level of trust, confidence, and investment in their purchases yet they’re principles in direct conflict with their personal politics.

But try to tell a Whole Foodie who votes Democrat that their politics aren’t sustainable or locally sourced and somehow that suits them just fine. Seems to me Republicans should embrace this feel-good lingo and explain the philosophies behind them. Honestly, it’s the perfect sales pitch for conservatism. At the very least, it’s a way to punch holes in the politics of the left.

Look at recent news regarding rampant poverty in cities like Los Angles, San Francisco, Seattle, and Portland to name a few. How about the blighted areas of Baltimore the president recently tweeted about? The Flint, Michigan water crisis is another example.

Every one of those issues is directly related to a total failing of local governments to adequately serve their tax paying constituents. Is it a lack of civic engagement by voters? Yes. Is it corrupt, ineffectual leadership by those elected by tiny vote counts on Election Day? Yes. Is every one of those cities run by Democrats who shout it’s not their problem, rather the state or federal government’s issue to fix? Yes, again.

Education, health care, zoning— you name it, it’s better when there is local engagement and control and the policies are sustainable. Balanced budgets sustain government. Tax cuts make for sustainable families and businesses. What do most of these Democrat-run communities do? The very opposite.

Locally-sourced, sustainability is pop culture jargon that should be adopted as political jargon as well.  They are key words to conservatism. Liberalism isn’t locally-sourced. It isn’t sustainable.

Alexandria Ocasio-Cortez and the proud socialists of the Democratic Party promote provably unsustainable policies. A lack of sustainability is supposed to be antithetical to the young people they’re trying to reach on Instagram and in campaign videos with Cardi B.

Why don’t those who care so deeply about sustainability and local sourcing at the grocery store call out the unsustainable policies of the American left? Because politics as practiced by far too many is conducted on a junior high level. There’s no depth and no seriousness of purpose. Far too many have been ill educated and indoctrinated.

Criticisms of free markets are shockingly ignorant and surface-level, if they even exist. People like Elizabeth Warren and Bernie Sanders don’t even bother lying to you about it anymore. The private sector, or local control, doesn’t work for them. They’re going to run it from Washington, D.C. Just hand them the keys.

But are their plans sustainable? A few of the moderate Democrats left are screaming at the top of their lungs, but Bernie and Liz just shout them down and wave it off. Let’s apply a sustainability test.

Start with “Medicare for All.” Democratic presidential candidate and former Maryland Congressman John Delany said he’s talked to local hospitals about Medicare for All. They told him they’d have to close, he warned.  Move on to the elimination of fossil fuels and forced consumption of “green technologies.” Just Google “energy poverty” in countries like Germany when it gets dangerously cold and how unaffordable it is to heat their homes.

Don’t forget to apply the test to the total elimination of free markets.

But indoctrination crushes critical thinking and curiosity these days. Words are thrown around by the left without any idea what they mean. People like AOC embrace unsustainable ideologies and anti-local controls while oldsters like Sanders and Warren are old enough to know better but voter dependency is their currency come Election Day.

If the terms “sustainability” and “locally sourced” are as important to young people and American liberals as they say, it’s time to remind them those words have far greater application than their gluten-free soy almond paste.