Wake Me When We’re Woke Enough

Chris Stigall
|
Posted: Apr 25, 2019 12:01 AM
Share   Tweet
The opinions expressed by columnists are their own and do not necessarily represent the views of Townhall.com. 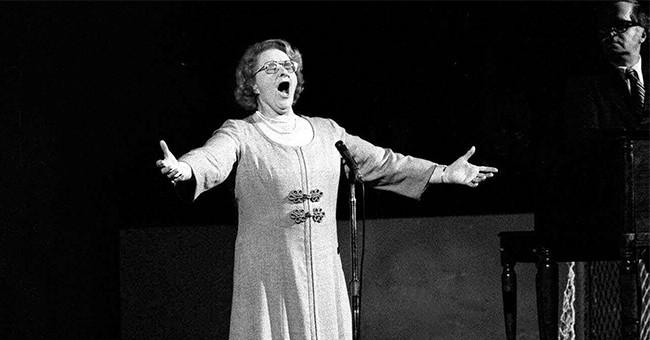 We’ve clearly got it good as a nation.  Economic growth is robust.  Joblessness has never been lower.  The stock market is roaring.  We live in relative peace.   There’s very little to complain about these days.

Which is why we had to travel back to the 1930s to find a problem.  Apparently, it’s Kate Smith.

I moved to Philadelphia nearly a decade ago and attended my first Flyers game shortly after.  The sold-out crowd was fired up.  It was a great atmosphere.  Then, the pre-game festivities began.

The overhead scoreboard, center-ice played a grainy video of what appeared to me to be a husky grandmother from 1970-something.  Wearing thick eyeglasses and a very dated dress and hairstyle, the woman belted out a powerful rendition of “God Bless America.”

“What was that about,” I asked somewhat snarkily to a lifelong Philadelphian next to me.  “That’s Kate Smith,” he said without a beat as if to suggest I should’ve known better than to ask in the first place.

I should’ve known what she meant to the Flyers.  How she became a cultural phenomenon in the city beginning in the late 1960s and through their Stanley Cup chase and ultimate victory in 1974 and seasons beyond.

I should’ve known the Flyers even erected a statue of Smith outside their arena after her death in 1986.

But the point is, I didn’t know.  Truly.  I was from the Midwest.  I was born in 1977.  I had no ties to NHL hockey.  I didn’t know Kate Smith.  She reminded me a little of Ethel Merman.  And the only reason I know her is because of a cameo in “Airplane” which made me laugh so hard I had to look her up to fully get the joke.

Then, on a random Thursday this April I read the news.  Kate Smith’s statue has been covered up by a tarp.  The next day, I read the Flyers will no longer play her version of “God Bless America.”  A few days after that, her statue was taken down.

Now I don’t know about you, but I’m a naturally curious person.  I don’t like being told what my immediate reaction should be to something that completely blindsides me.  When I heard the Flyers reacted so rapidly to something so out-of-left-field, I had to investigate.  Just what was she singing?  In what context were the lyrics?

It’s important to again stress I have no emotional ties to Smith or to hockey.  No disrespect to my Philly family.  I’m just dispassionate on this.  Nevertheless, I was very confused by a pop-up controversy destroying a fifty-plus year tradition. I guess I’m cursed with a functioning brain and not ruled by social media mobs.

You’ve likely read by now what I’ve read.  The songs were 1930s satire.  Smith didn’t write them.  One was performed not only by Smith but also by a famous black singer and noted commie Paul Robeson who’s prominently featured on a Philadelphia mural even now.

In particular, the song “That’s Why Darkies Were Born” is a shocking thing to read as a title in 2019, it’s true.  But again, being naturally curious instead of spoon fed, I looked up the lyrics.  They’re worth reading.  If you do, I think you’ll see in them what I did.  Enlightened commentary.  Much like I see the enlightened commentary in my favorite film of all time “Blazing Saddles.”

Yes, I said enlightened – for their time.

You have to look beyond “darkies” and “n-words” to see the intended good in this stuff.  You also have to be prepared to understand the objectionable words were used for a specific purpose.  To paint the users – whites in this case – as ignorant, stupid, and closed minded.

In fact, I’d go as far as to say “That’s Why Darkies Were Born” not only shames whites for their short-sided bigotry and lack of appreciation for blacks, but goes further in giving blacks credit for their perseverance, work ethic, and most importantly a depth of spiritual discipline the song implies whites couldn’t achieve.

Said another way, the song celebrates blacks as people far closer to God and godly ways than whites.   But, Kate Smith sang “darkies” and Mel Brooks said the “n-word” so erase them from history forever!  Words are all that matter now.

Context and nuance are SO last century.

You’ve likely read about Smith’s war bond fundraising during World War II that raked in what would have been billions in today’s dollars to help the war effort.  She was a patriot.  She was super-famous.

Still, I would lay any amount of money on a bet that no one under the age of sixty could have answered questions about Kate Smith relating to the facts you just read.  To nearly every Philadelphian not in a nursing home, Smith was simply a warm, positive tradition whose biography was long forgotten if ever known by most at all.

Now this woman with a rich, patriotic heritage, amazing talent and a truly positive relationship with Philadelphia is to be erased forever because we’re too woke in 2019 for century-old song lyrics which were really meant to slander the slanderers.

What else is Philadelphia too woke to tolerate? Independence Hall?  The Constitution?  The Founding Fathers? I shudder to think, and don’t doubt it’s coming.

Please, just wake me when we’re done being woke.