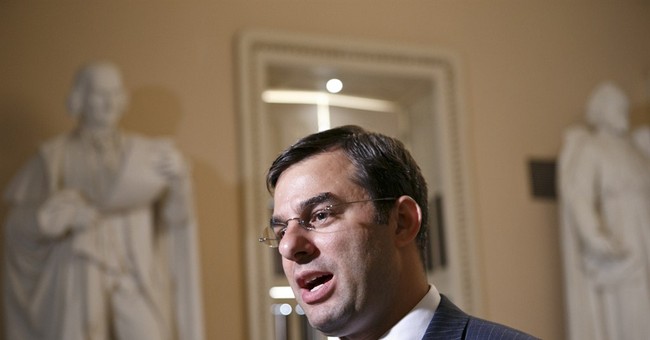 You may remember the scene in Animal House where Kevin Bacon plays a fraternity pledge being hazed. Down on all fours getting paddled, Bacon says, “Thank you sir, may I have another?”

The political establishment is trying to haze fiscal conservatives in Congress. End the shutdown, they say, and allow President Obama to administer the paddle. A recent story in the Washington Post, for example, focused on how business leaders supposedly want Republicans to be “pragmatic” and not “revolutionary,” like Rep. Justin Amash.

Amash is so revolutionary that he wants to repeal an unpopular law: Obamacare. This is a law that the Democrats pushed through Congress in a very partisan and arm-twisty fashion without a single Republican vote. It is a law that the president has made a series of unilateral changes to without the approval of Congress.

The House Republicans have voted repeatedly to repeal Obamacare, and polls show that the general public has consistently opposed the law since it was passed more than three years ago. If there is a shortage of “pragmatism” anywhere, it is in a White House that has turned a deaf ear to the Obamacare concerns of Republicans and the general public.

The GOP has finally dug in its heels on Obamacare. Using a government shutdown to try and force reforms may seem extreme to some, but it is not unreasonable given the huge damaging impact that the law will have on our health care system.

Remember that the only major budget reform of recent years — the 2011 Budget Control Act — did not come about from the Republicans saying submissively to Obama, “Thank you Mr. President sir for your $1 trillion deficits, may we have another?” Instead, the Republicans confronted the president over a debt-limit vote to successfully force change.

Much of the Washington establishment seems to think that Republicans — especially tea party Republicans — ought to take a passive “go along to get along” governing approach. But in my book, The Republican Revolution 10 Years Later, an essay from Newt Gingrich talks about how Republican reformers in the 1990s faced “active, continuing opposition” from the party’s old guard, and an essay from Dick Armey describes how the old guard just wanted the two parties “to get along in peace.” But the modest reforms achieved in the 1990s were only possible because a new crop of young Republicans were — at least initially — infused with a revolutionary and confrontational spirit.

In her autobiography, former British Prime Minister Margaret Thatcher describes how during the socialist economic mess of the late-1970s, many elder statesmen in her own Conservative Party wanted to be supportive of Labour Party policies, maybe even joining them in a coalition government. Thatcher realized the folly of such appeasement, and she made history by attacking Labour’s big-government policies head-on.

In the current battle over the shutdown and debt limit, the Republicans may or may not achieve some reforms to Obamacare and entitlement programs. And it is true that budget brinksmanship is a messy process that many voters frown on. But cutting government programs will never be easy. And it would certainly never happen without revolutionaries such as Rep. Amash who are refusing to join the big-government fraternity in Washington.

This article appeared in Daily Caller