Charlotte Hays
|
Posted: Sep 02, 2016 12:01 AM
Share   Tweet
The opinions expressed by columnists are their own and do not necessarily represent the views of Townhall.com. 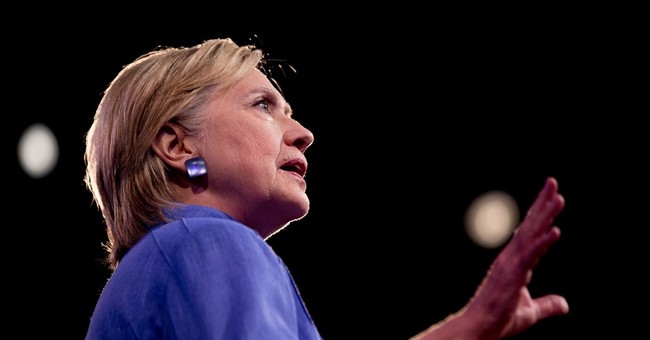 As a feminist icon, Hillary Clinton is allegedly nonpareil.

And yet the more that is revealed, one can't help noticing that something in Hillary's make-up doesn't quite fit with the strong, competent feminist image at all: the woman is utterly helpless. Despite her much-touted resume, Hillary seems to need a great deal of nursemaiding from her staff and appears never to have formulated a definite working concept of what serving as the nation's top diplomat entailed beyond taking trips to as many nations as possible.

FBI Director James Comey called Mrs. Clinton's handling of classified emails as secretary of state "extremely careless" and added that there was "evidence to support a conclusion that any reasonable person in Secretary Clinton's position . . . should have known that an unclassified system was no place for that conversation." Ya think?

As secretary of state, Clinton never bothered to master the system by which the nation's secrets are protected. Perhaps she was flummoxed by details or maybe she was just lazy. In discussing classified information, in addition to being disingenuous, she does seem genuinely confused. As we know from reports this week, Mrs. Clinton continued to email classified information as a private citizen after she left the State Department.

The cosseted Mrs. Clinton hasn't driven a car in decades and, unlike other Baby Boomers who have adjusted to the technological revolution, was so hopeless in managing her Blackberry that top aide Huma Abedin tried to confiscate it, much as one pries a dangerous toy from the hands of a small child. “I need her berry and she takes that thing to every bilat [bilateral meeting], to the shower, so hard to get my hands on that thing,” an exasperated Abedin emailed Cheryl Mills, another Clinton insider.

Columnist Michael Barone has pointed out that Clinton's lobbying for a highly unorthodox employment arrangement for Abedin (while at the State Department, Abedin was holding down three lucrative jobs--but who's counting--including one with the Clinton Foundation) might have been because of the nation's top diplomat's "overdependence" on Abedin.

Abedin undeniably was right to want to snatch that Blackberry, seeing as how the boss lady had a penchant for using it in unsecured spaces in hostile countries. Still, "overdependence" has its drawbacks--in this instance possibly because Abedin, 40, comes with significant personal baggage of her own.  On the upside (from Clinton’s perspective at least, though not from the rest of us Americans), Abedin was willing to act as the go between in what was indubitably a pay-to-play scheme with the Clinton Foundation and the Clinton State Department, but she was also married to a serial sextexter who poses security problems of his own, and Abedin has worked as an assistant editor of a Muslim magazine, edited by Abedin's mom, that featured articles blaming 911 on the U.S. and stating positions on women's rights strongly at variance with Clinton's—that’s hardly what most politicians are hoping to find in their top aides resumes.

One presumes that Clinton was aware of all the drawbacks associated with Abedin, but, if Wikileaks is to be believed, there is also plenty of evidence that Madame Secretary was above simply not paying attention when she found things bo-ring.

Under the subject bar "What's New Today?," the Secretary of State reportedly writes Diane Reynolds (a pseudonym for Chelsea Clinton, according to Wikileaks), "I'm sitting in the Libya mtg, wondering what other shoe will drop." I wonder if Colin Powell sent out "What's New?" emails during important State Department meetings.

Mrs. Clinton is famously guarded and perhaps that is because, if depending on her instincts, she will say the wrong thing. A few days before the Obama administration threw Egyptian President Hosni Mubarak under the bus, Mrs. Clinton proclaimed that the strongman and his wife were "friends of my family." Great. Even if you think the administration should have treated Mubarak better, it is impossible to imagine Henry Kissinger gassing on about family friends before the administration had determined its policy.

Sometimes Hillary seemed to be playing as being secretary of state. She saw her job as trying to best Madeleine Albright on the number of countries visited. That's a lot of motion but given that the world was falling apart on her watch, couldn't we call this busy work? It is safe to say that Dean Acheson did not view the job of being secretary of state in terms of frequent flyer miles.

Hillary Clinton seems to be falling down even in one field in which her competence has rarely been questioned: lying. As you may recall, the late New York Times columnist William Safire called Mrs. Clinton "a congenital liar." Congenital, yes, but she is no longer on top of her game, even in this field of formerly undisputed prowess. She seems to do nothing so much as providing her enemies with a constant stream of sound bites, never managing to keep her story straight.

Given Mrs. Clinton's signal incompetence and helplessness, it is downright nervy that her campaign tries to portray her as a dab hand in foreign affairs. But she does have a compelling ad out that features the White House with a voice over: “In times of crisis, America depends on steady leadership, clear thinking, and calm judgment,” the narrator says. “Because all it takes is one wrong move.”

If you've considered Mrs. Clinton's level of competence, this ad only makes you pray that, if Mrs. Clinton becomes president, Huma won't leave the box with those nuclear codes lying around where Hillary might mistake it for the TV remote.