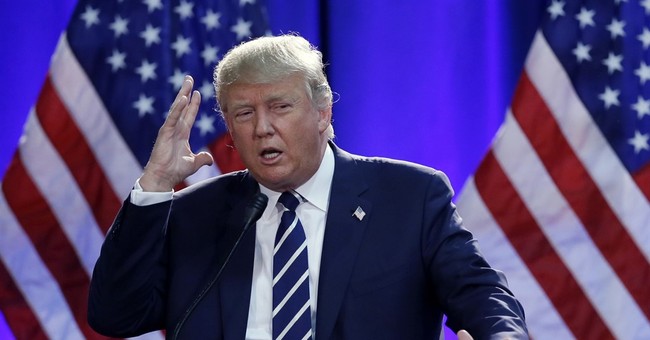 If you knew Donald Trump like I know Donald Trump, it would seem par for the multimillion dollar, luxury golf course that the fallout from what was an unusually impressive GOP presidential debate has devolved into Mr. Trump's slinging charges that a female moderator who asked him "mean" questions was in her period. That's pure Donald.

I don't actually know Trump, but as a (minor) gossip columnist in New York when Trump Divorce I was in full swing, I did have a front row seat. It is strange--or maybe not--that in a serious time in the annals of our republic the presidential campaign is becoming in many ways a replay of a Trump divorce or wedding. This could turn out to be more a "Page Six" than a straight news kind of presidential season.

The essence of a Trump divorce or wedding is publicity. That seems to be in many ways also the essence of a Trump presidential campaign: will he take the pledge not to run as a third party candidate? He's hinted he will. No, he won't. But stay tuned . . . . by all means stay tuned. That is the point of it all. Ah, this reminds me of the Trump, who constantly fed the gossip beast in those halcyon days when he and then-wife Ivana Trump, in the process of a divorce, had "his" and "her" gossip columnists. Ivana Trump had the great Liz Smith, known as "the Doyenne of Dish," in her corner, while Donald had to make do with the feisty Cindy Adams, whose trademark sign-off is "only in New York, kids. Only in New York." Well, kids, it's no longer only in New York. It's in the American presidential campaign.

After the divorce story broke, Donald Trump courted gossip columnist Liz Smith, who broke the story of the Trump divorce in a front pager in the New York Daily News, to become his conduit to the public instead of Ivana's, but the stout-hearted gossip columnist refused. "You gotta dance with the one who brought you," she told Trump. As late as last year, Smith, now in her nineties, recalled to the New York Times, "I still remember Trump saying he would buy The Daily News just so he could fire me." It was bluster, of course, and I'm just hoping that, if Trump becomes president, Mexico doesn't get wind of this. Golly, I'd hate for them to refuse to erect that border wall Trump promises because Mr. "You're Fired" couldn't even get a lady gossip columnist out on the streets!

This level of publicity doesn't just happen. Think of the difference between Caroline Kennedy, who led a quiet life before becoming an ambassador and still remains largely out of the spotlight, and her late brother John F. Kennedy Jr., who courted publicity. John Kennedy Jr. basked in the spotlight. Trump, too, has stoked the publicity fires, as he is doing in the wake of the debate.

A Trump employee calling himself John Miller once called a People magazine reporter to tell her Trump's romance with Marla Maples, who emerged as the Other Woman in the first Trump divorce, was over and that Trump already had a new girlfriend, who had dropped Mick Jagger for Trump. When the reporter played the recording of the conversation to her editor and other colleagues, they said that John Miller was Trump.

But true love won out. Marla Maples and Trump married at a gala wedding at the Plaza Hotel (owned by Trump) that surpassed standards of lavishness, if not good taste. Nearly two hundred ladies and gentlemen of the press were credentialed to cover it. The schmaltzy music included "There's a Place for Us," "Make of Our Hearts One Heart," and "Stranger in Paradise." A sizeable portion of the guests didn't know the couple. It was not the sort of wedding remembered for its sweetness. Esquire's Julie Baumgold memorably quipped that there "wasn't a wet eye in the house."

Their hearts were one heart for a mere three-and-a-half year marriage. Marla reportedly ended up with $2 million and child support for their daughter. Trump met Melania Knauss, the third Mrs. Trump, a model who grew up in Europe, at a party at New York's Kit Kat Club, where she reportedly rebuffed the eager real estate tycoon. It didn't take long, however, for her to succumb to Trump's charms. Before you knew it, they were giving an interview to shock jock Howard Stern and seeming to drop hints that they might be clad in nothing more than what the Great Couturier in the sky had given them.

It was about this time, 1999, that Trump began a first short presidential campaign. Miss Knauss said that as First Lady she would be "very traditional" and "like Betty Ford or Jackie Kennedy." To her credit, Melania has been described as a good helpmeet for her husband and "too nice for New York."

After a six year courtship, Trump finally told Melania "You're hired!" and the couple wed at Mar-a-Lago, Trump's Palm Beach estate. This is the wedding to which Trump now famously claims to have summoned Hillary Clinton, to whom he had donated money, as a guest. Alas, Mrs. Clinton is the wedding guest who won't stay bought. She is now saying that she went to the tycoon's wedding because the thought it would be "entertaining."

Still, I understand Trump’s appeal for many Americans. I get it. I, too, want the United States to be great again, as Trump promises to make it. People feel helpless. We don't like ObamaCare, didn't when Congress was debating it, but there was nothing we citizens could say to make a difference. Public opinion seems to run two to one against the Iran nuclear deal. Yet it doesn't appear that we can stop it. We're afraid that illegal immigration is undermining our laws, but there seems little hope of stopping that either.

And into this mix marches a loud-mouthed, brash billionaire who is not ashamed of his money. Maybe he can do something, people think. And he does drive people nuts. Maybe he could drive the mullahs nuts, who knows?

I understand the temptation, but people shouldn’t forget this history. Whatever happens with regard to Trump in the future of the presidential campaign, he has put the GOP in a spot that is fraught with peril. I have a former gossip columnist's tip for the GOP: a divorce from Donald Trump can be very, very messy.